Water, of course, is a necessity for life. As the Mekong countries’ populations increase so do demands for fresh water. Since fresh water is a constant or declining resource, the availability of water per capita logically declines as population increases.

Vietnam and Thailand are the most prolific users of water in the region.

With fish as the leading source of protein in most of the region, the water ecosystem is also strongly associated with the region’s food security. The Mekong supports the world’s largest inland fishery. With 781 species of freshwater fish and 165 migratory species,3 the Mekong is second only to the Amazon in river biodiversity,4 and it has the highest incidence of freshwater fish diversity per kilometer in the world.5 The Tonle Sap Lake, into which the Mekong flows in central Cambodia, has the third highest fish diversity of any lake in the world.6

In 2010, the average yearly fish consumption, in the region, was estimated at 56 kilograms (123 pounds) per person.7 Freshwater fish accounts for between 47 to 80 percent of protein consumption, dependent on the locale,8 while Cambodia leads the world in per capita fish consumption.9

At the macro level, the fishing industry is a vital part of the regional economy, generating as much as USD 17 billion per year, contributing three percent to the combined GDP of Vietnam, Cambodia, Laos, and Thailand (up to 12 percent for Cambodia), representing 13 percent of the world’s total value for fisheries,11 and 18 percent of the world’s freshwater fish catch12

However, the sustainability of the region’s freshwater fisheries is largely dependent on maintaining the health of the water ecosystem. Hydropower dams, pollution (which both kills and contaminates fish), over-extraction of water, and other changes to the sensitive hydrology are taking their toll on fish. Over-fishing is also a serious concern. Both fish capture and fish diversity in the LMB are in decline.13

Urbanization and rising affluence is associated with increased demands for water and changes in the ways in which water is accessed and distributed.14 Cities require municipal water works to provide residents with access to clean water, as a matter of public health. The percentage of the Mekong region’s urban dwellers who can access clean water has steadily increased over the last few decade.

Sanitation and the management of waste water is closely associated with water quality and efficient water use in cities. These may further stress water resources.

Cityscapes also disrupt the natural hydrology. With their hard surfaces, cities tend to be ‘impervious’ to rainfall; that is, they block the absorption of rainwater into the soil. This limits the re-charge of water into aquifers and increases surface water run-off into rivers and lakes. The filling of lakes and wetlands to create new land for development also affects how rainwater is able to drain from cityscapes. These are reasons for rain-related flooding in urban areas. Cities must plan adequately for the management of rainfall run-off. 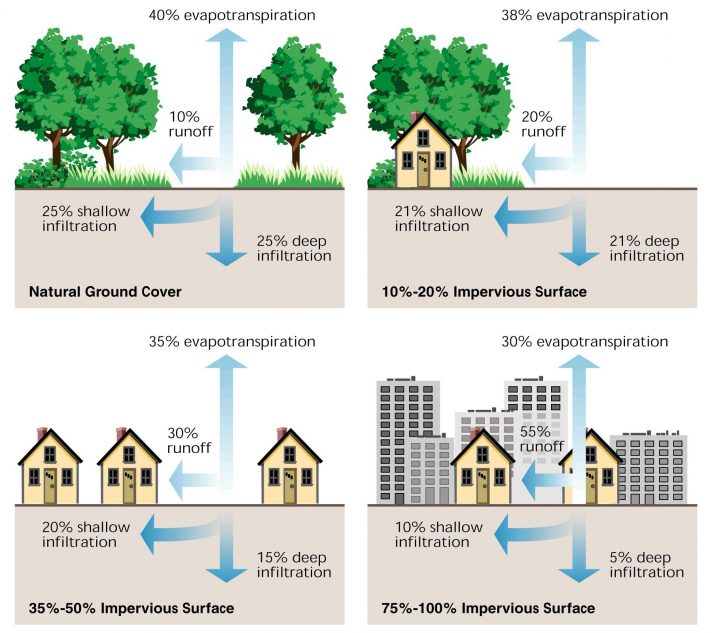 Although direct tourism-related water use is less than 1 percent of global consumption, tourism and entertainment can add significant pressure on urban water systems and the natural environment for facilities such as hotels, golf courses, and swimming pools. In the developing world, such as in most of the Mekong region, tourists also tend to use far more water per capita than do residents.15

Another increasing demand for water is for industries, which require large supplies of water. The expansion of agro-industry throughout the region, is largely dependent on increasing and improving irrigation. Irrigated agriculture in the Lower Mekong Basin is already the largest consumptive water user.

The total irrigated area in the basin is approximately 4 million hectares and expanding.16 Given the trend toward agro-industry, water extraction for irrigated agriculture is anticipated to continue to increase.

The Global Food Security product provides analysis for irrigated versus rain-fed agriculture areas and is displayed here with an overlay of known dams within the region. Green areas are heavily irrigated fields and within the Arrewaddy and northeastern Thailand these areas are denoted with numerous dams.

In regard to the manufacturing and processing sectors, these require water to keep machines clean and cool, to clean and process raw materials (including ores), and to clean buildings.

Other industrial pollution has also affected water quality and led to fish kills and  affected the quality of drinking water. As an example, in February 2016, Vietnam-Net reported that 1,119 tonnes of fish raised in cages along the Cai Vung River in the Mekong Delta had died from river contamination.20 Other fish kills, associated with industrial waste and other pollution, have been reported on the Sre Pok, Dong Nai, Chaopraya, Tonle Sap and Red rivers as well as the Taungthaman Lake in Myanmar and canals in Ho Chi Minh City. In 2016, a massive fish kill along 215 kilometers of Vietnam’s central coast, associated with wastewater contamination, led to massive economic losses and sparked nationwide protests.21

Algal blooms, caused by fertilizer run-off and exacerbated by climate, choke fish and poison water. Contaminated water and contaminated fish, whatever the cause, pose clear risks to human health, lead to economic losses, and increase the costs of drinking water treatment. Globally, algal blooms are on the rise, putting both freshwater and coastal areas at risk. Algal blooms have been noted in the  Mekong system22 and Vietnam’s coastal areas.23

While no basin-wide study of pollution has been undertaken, a study aggregating the results of localized monitoring and research  efforts identified pollution hotspots on the Mekong.24

Besides its direct consumption and its support of the region’s food system, water is  seen as a critical resource for meeting energy needs. CGIAR’s Water, Land and Ecosystems (WLE) program, has documented 750 dams, including 532 completed, 52 under construction, and as many as 152 planned.25 While dams associated with the Lower Mekong Basin may generate as much as 30,000 MW of energy, the impacts on the region’s hydrology and biodiversity will also be significant. They will disrupt both fish migration and the timing and regulation of water and sediment flows. The viability of dams may also come into question as overall water volume in the rivers declines due to climate change and extraction, and siltation interferes with operations.26

Finally, the region’s waterways are an important but under-utilized transportation link. Water transportation tends to be more energy efficient, cheaper, safer, and easier than other forms of transport but is not as widely used as it could be. With more than 51,000 kilometers in navigable waterways- about 20,000 kilometers of which are in the Lower Mekong countries – it is not surprising that ASEAN has included inland water transport and shipping in their ASEAN Economic Community (AEC) infrastructure development plan.27

The Mekong River itself is mostly navigable only during the wet season, when the river may swell in volume by as much as 30 times, and in sections due to natural barriers. For instance, the Sambor rapids in Cambodia and the Khone Falls in Laos are impassable without blasting.

Other inland ways, such as the Chaophraya in Thailand, the Ayerwaddy in Myanmar, the Dong Nai in Vietnam, and other rivers are critical for domestic transport and shipping. In Vietnam alone, according to the Mekong River Commission, roughly 73 percent of cargo tonnage and about 27 percent of passengers travel by water annually.28 Expanding river transport would require blasting in some areas, with impacts to the hydrology and fish ecology. Transport would also be dependent on the depth of the waterways so seasonal variations in river depths and declining levels of water overall may make water transport unreliable or inconsistent.