‘Surface water’ is the water that collects on top of the earth’s surface. This includes all of the water in rivers, streams, lakes, ponds, and wetlands, as well as the ocean. Historically, most of the region’s fresh water needs—for both agricultural and household use—have depended on surface water.

Most of the region’s surface water is organized into large riverine systems, which include complex networks of associated streams, lakes, ponds and wetlands within large forest catchment and watershed areas. These flow downstream into vast deltas before discharging into the ocean. These deltas are created (and maintained) as rivers deposit sediment downstream, which accumulates over thousands of years.

A river delta is a wetland formed from the deposit of sediment that has been picked up by the river upstream and deposited when entering slower-moving or standing body of water such as an ocean, sea, estuary, or lake.

Sediment is the soil and mineral particles that are eroded from the river channel or washed into the river as it travels downstream.

In the Mekong region, both surface water volume and the size of flood plains fluctuate considerably between seasons, with water levels highest during the latter part of the wet season.

Changes to surface water are increasingly evident around the world, largely associated with man-made developments. This is demonstrated by a preliminary global study1 looking at surface water change over thirty years.2 In the Mekong region, the study shows that approximately 70,111.48 km2 has been converted from land to water, and 51,608.40 km2 from water to land between 1985-2016. Most of the land-to-water conversions appear to be associated with dam reservoirs and, in coastal areas, salt water intrusion. Areas of water-to-land conversion suggest siltation, or are due to engineered land-fills. This is the case in Phnom Penh, where lakes have been filled to create new land for development. While the study does not look at the overall impacts to actual water and sediment flows, such changes typically affect hydrological services. For instance, unless there is adequate planning, the conversion of lakes to land in urban areas often results in poor rainwater drainage and localized flooding, as has been the case in Phnom Penh. The cumulative impacts of multiple projects and climate-change driven changes could be significant, although the overall changes at the ecosystems level are not yet fully understood. 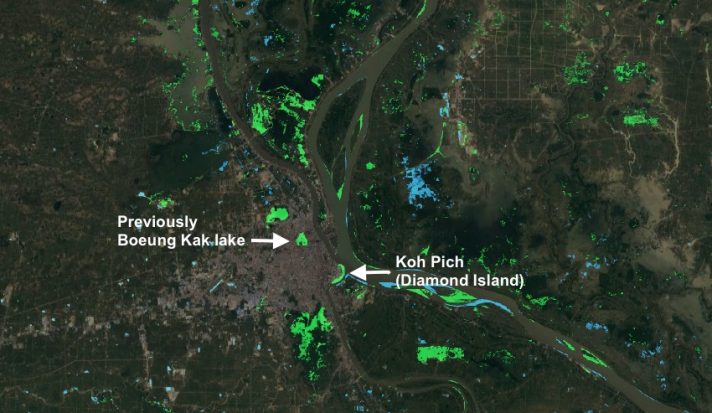 Striking increase of surface water is visible in the Arreyawaddy and the Sittang river basins of Myanmar which is evidence of reservoir construction. Smaller reservoirs are scattered throughout southern Vietnam and major reservoir developments in northern Vietnam and Laos has increase overall surface water coverage with in these countries. Along coastal areas in the Mekong delta in Vietnam, the Bay of Bengal in Myanmar and the Red river delta in Northern Vietnam along the South China Sea, the map displays surface water gains which could be an indication of seawater intrusion and erosion. Inversely land reclamation areas are highest in Myanmar (24,213.55 km2) and Vietnam (14,829.54 km2) along rivers, lakes and reservoirs. It is unclear from this data if the sedimentation of rivers, reservoirs and overall agriculture paddy land areas; such as in the Tonle Sap and upper Mekong Delta is due to natural land changes over time or extended drought periods.

Read more about the region’s major rivers and lakes.