Climate change impacts human health. Now considered by the World Health Organization to be the greatest health challenge of the 21st century, the relationship between climate change and health has received little attention.1 Only limited research on the topic has been done.2 However, the growing evidence of the negative impacts, both direct and indirect, of climate change on health is beginning to inform public health discussions.3 Direct impacts can be attributed to climate-related hazards and often have severe health outcomes, such as deaths from drought. Indirect effects cover a wider spectrum of health effects, which appear due to the ecological and societal response to climate change. Since indirect impacts can occur years after climate-hazards have happened, they are difficult to determine.4 For instance, a community may suffer health effects from a long period of undernutrition due to repeated crop failures resulting from salination or extreme weather patterns.

Due to their geographical area, the LMCs are particularly vulnerable to the impacts of climate change. Climate-related hazards, such as floods, droughts, landslides or sea level rise are becoming more frequent. The Paris Agreement recognizes that vulnerable countries like the LMCs need financial and technological support to respond to climate change. It also acknowledges that health is a human right.5

Responding to the impacts of climate change on health requires both mitigation and adaptation strategies. Climate change mitigation, or reducing the impacts of climate change, could save lives by reducing the burden of non-communicable diseases. For instance, reducing greenhouse gases can decrease air pollution and  prevent negative health outcomes. On the other hand, adaptation aims to decrease the vulnerability of populations to environmental health risks – air pollution, for example.6 Adaptation strategies are more complex to implement than mitigative strategies,7 because impacting the environmental determinants of health is complex and depends on changes in other sectors.

Yet, despite studies suggesting that the financial benefits of preventing illness is twice that of responding to illness,8 the impacts of climate change on health continue to be overlooked by decision-makers. This is a major concern, particularly because protecting human health requires a multi-sectoral approach.9 Moreover, decision-makers need to carefully balance their strategy between improving human health and adapting to or mitigating climate change. For instance, improvements in health facilities require energy investments, which can increase emission levels. Harmonized climate change and health agendas may help to create the necessary balance.10

Indirect impacts of climate change on health in the Mekong

The Lower Mekong Region, especially Cambodia and Vietnam, is at high risk of flooding due to climate change.11 Floods, combined with high temperatures, threaten water and food security by contaminating drinking water sources and impacting crops, among other things. This can further lead to food- and water-borne diseases.12 Cambodia’s access to safe water supplies, the lowest of all the LMCs, saw only 79% of the total population with access to basic drinking water sources (within 30 minutes round trip) and 26% with access to safely managed drinking-water services (accessible on premises) in 2017.13

The LMCs may also be impacted by undernutrition due to decreased access to food after natural disasters. Undernutrition contributes to ill-health, and because sick people cannot work productively, it may result in a rise in poverty. High temperatures and humidity add to the difficulty by making outdoor work difficult, in turn reducing agricultural production and leading to further food insecurity.14

Moreover, ecological changes, like those experienced by the LMCs in the last decades, can increase the risk of vector-borne diseases15., a category that includes mosquito-borne diseases such as Malaria and Dengue Fever. In Cambodia, mean annual temperatures have increased by 0.8°C since 1960 and the frequency of hot days has increased by 46. Lao PDR had also experienced an increase in temperature of 0.1-0.3°C per decade by 2000. Thailand recorded an increase of 1°C since 1950 and the mean annual temperature is projected to increase by another 1.4-1.8°C by 2060. High temperatures such as these, humidity, and increasingly heavy rainfalls provide ideal conditions for vector-borne diseases to spread.16 In 2019, some LMCs experienced a great increase in Dengue Fever cases. Thailand recorded over 98,000 cases by October 2019, compared to 42,000 cases for the same time period in 2018.17 Cambodia shows an even larger increase, from 8,632 cases by November 2018 compared to 66,461 cases for the same time period in 2019.18 19 In Lao PDR, 5,914 cases were reported in September 2018, compared to 38,026 observed cases in September 2019  with 59 deaths from Dengue fever.20 21

Note, however, that while these numbers give a snapshot of Dengue Fever in the LMCs, the WHO acknowledges some major challenges with the data. Reporting varies between countries, and cases often remain misdiagnosed, unreported, or are reported after a delay. Some statistics include suspected and confirmed cases, whilst others only report laboratory-confirmed cases. Incomplete datasets complicate disease detection and thus disease control.22 The disease often remains asymptomatic or mild, which further complicates accurate reporting.

Finally, climate change can also impact mental health. Extreme weather events may cause mental stress and lead to post-traumatic stress disorder (PTSD), anxiety or depression. Natural disasters can lead to forced displacement, another stressor for mental health23 For example, Lao PDR experienced heavy rainfalls in 2018, resulting in flooding in 11 provinces. Over 6,000 people were displaced and had to reside in evacuation camps. More than 25% off all outpatient cases were treated for trauma, PTSD or depression, but psychological support remained inadequate due to a shortage of mental health professionals.24

The impact of climate change depends on multiple social, environmental and public health factors put some populations more at risk of developing adverse health effects than others.25 For example, working in agriculture, a high risk occupation that is an important income source in the LMCs puts workers more at risk of transmittable diseases, since they are more likely to be in contact with contaminated water after floods.

Socio-economic status is another determinant in health outcomes. In Cambodia, studies have shown that poverty reduces access to safe water sources. Also, ethnic minorities will be disproportionately affected. Highland populations in Lao PDR and ethnic minority groups in Vietnam rely heavily on natural resources. A consequence of climate change is a reduction in sustainable access to vital resources which can lead to severe health outcomes, such as undernutrition. Added to infrastructural shortcomings26 and less than universal healthcare,27 access to health facilities is further complicated.

Living in rural areas can also complicate climate change impacts on health. This pattern shows clearly in the LMCs, where some countries have higher rural populations than others. For instance, rural populations have limited access to fuels and often rely on unclean fuels, or fuels that give off high emissions such as wood, agricultural waste or coal, as an energy source. Burning these fuels releases highly polluted smoke, which is not only a major health risk, but also greatly contributes to outdoor air pollution.28 In 2016, where only 6% of Lao PDR’s population had access to clean fuels for cooking29, over 5000 deaths were attributed to indoor air pollution.30 Only 18% of the total population in each of Myanmar and Cambodia have access; over 44,000 deaths were attributed to indoor air pollution in Myanmar, and over 10,000 deaths in Cambodia.31 Thailand and Vietnam, the more developed countries of the LMCs, had 74% and 67% access to clean fuels for cooking respectively.32 Indoor air pollution caused almost 30,000 deaths in Thailand and over 32,000 deaths in Vietnam in 2016.33

Men and women are also unevenly affected. For example, droughts may require women, who are primarily responsible for water collection in the LMCs, to travel farther to find clean water sources from which to collect water. Carrying heavy water pots for a long time can cause not only physical injuries, but also costs time that could otherwise be used for education, other work, or leisure. Men, on the other hand, are more prone to developing mental health problems due to drought, which has been shown to increase suicide rates.34

Climate change’s impact on health will slow down progress in achieving the SDGs. While climate change is not specifically indicated in the SDG on health, SDG3 – Good health and well-being, each indicator has the potential to be impacted by climate change. In fact, all SDGs will be impacted by climate change, beyond what is noted in SDG13 – Climate Action. For example, climate change may increase the incidence of diseases, which means more individuals will need to spend money to access health care, putting them at higher risk of impoverishment, thus impacting SDG 1 – No Poverty. 35 This is particularly relevant for the ASEAN countries including the LMCs, where health insurance coverage is low and out-of-pocket spending on health is common.36

Current policies have not significantly reduced the risk of environmental health challenges. If this continues, large parts of the population, often those who contribute the least to climate change, will feel the negative consequences.37 Scientific evidence is needed to inform policy. The traditional metrics of health data should be extended to include human rights, equity, socio-economic and financial indicators.38 As new climate and health challenges arise, good implementation of strategies is crucial. While all the LMCs have established relevant strategies, financial constraints and limited capacity mean that implementation is limited.39 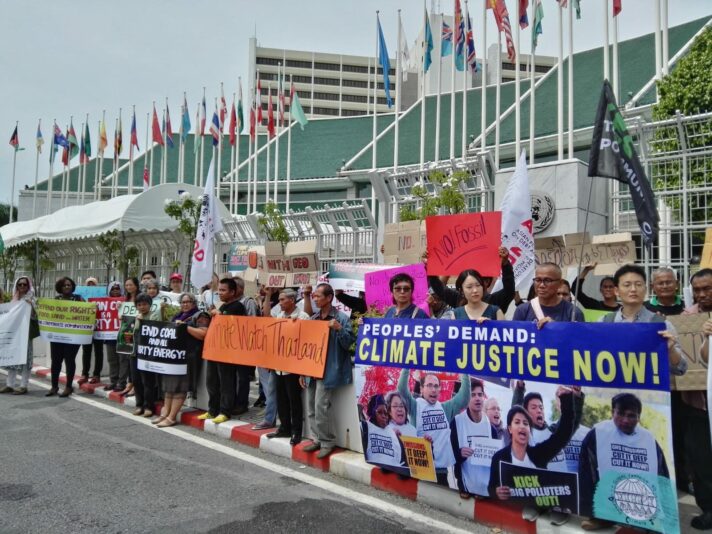 Climate change is a pressing and present concern for those engaged in sustainable development in the Mekong Region. Photo by 350.org via Flickr. Licensed under CC BY-NC-SA 2.0.

Finding causal statistical evidence for the impact of climate change on health is challenging, since climate change is a long-term process and health is impacted by many variables. Moreover, impacts may vary from one geographical area to another, which makes generalized conclusions difficult.40 This does not mean that climate change has no impacts, or that no data can be found. However, it is true that there is limited relevant data available.

Currently, the impact of climate change on health is understood through data on changes in rates of disease and scenario-based models. Though useful, these methods also often do not account for external drivers of disease transmission such as socio-economic factors.41 Further, collecting reliable, relevant data is necessary to raise awareness, develop strategies and achieve progress. Some countries in the LMCs, such as Cambodia42 and Lao PDR43, have recognized the need to develop national strategies on climate change and health. However, without relevant data, policymakers cannot address the issue sufficiently and every delay in taking action will negatively impact people’s health. Considering the vulnerability of the LMCs to climate change, urgent action is needed.44 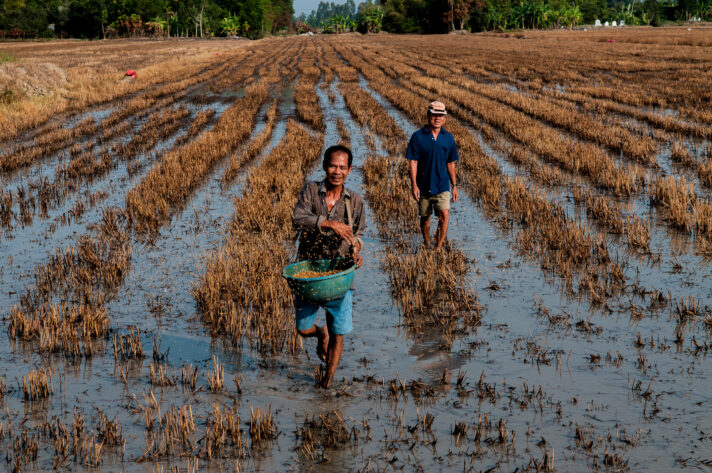 The Lower Mekong Countries are expected to be hit hard by climate change. Photo by G. Smith (CIAT) via Flickr. Licensed under CC BY-NC-SA 2.0.