International aid and development assistance are important contributors to the economies of the Lower Mekong region. All Lower Mekong countries receive official development assistance (ODA), with Thailand also contributing ODA as a donor. Nevertheless, the region accounts for just LMC 3.37% of the world’s total ODA received in 20171, a low figure considering the significant military conflicts that the region has faced in the last five decades and the current spectre of climate change related disasters.

ODA is specifically defined by the OECD. It refers to the flow of resources from official agencies (including governments and government agencies) where economic development and welfare is the main objective. The assistance must be concessional – there must be a “grant element”, which means that aid is provided with an interest rate or maturity period that is exceptionally beneficial to the recipient.2

The majority of ODA to developing countries comes from the 29 members of the Development Assistance Committee (DAC) of the Organization for Economic Co-operation and Development (OECD). ODA in the LMCs is primarily bilateral. Japan continues to be one of the top donors to the Lower Mekong Countries, based on 2016-2017 World Bank numbers. The total amount of ODA received in the Lower Mekong was almost US$5.5 billion in 2017, US$300 million less than the total amount received in 2016 (US$5.8 billion).3Over the last decade, Vietnam has received the highest annual amount of ODA among the Lower Mekong countries by far, although in 2013 Myanmar received a spike of ODA.

Myanmar’s increase of ODA came as it continued to remove barriers to trade and restrictions on foreign entities operating within its borders. Western donors, such as Australia, the European Union and the United States, had committed only limited humanitarian aid in Myanmar following the 1962 military coup, complaints of the repression or rights, and intermittent political instability over several decades. They began expanding assistance and re-establishing local offices following moves towards greater transparency and democracy, especially after 2011.4 The massive increase was not sustained, however, and Myanmar’s 2015 ODA figure of US$1.2 billion was less than a third of the figure of 2 years earlier.

A donor country’s aid commitments can change significantly after a change in national administration. Proposals include cutting aid to developing nations by over a third, merging USAID with the State Department and realigning funding to tie it more closely to US national security objectives. As at June 2019, the changes are still pending.5

Chinese aid and financing in the LMCs

Although not listed in the chart of top donors to the Lower Mekong, China is a large financial contributor to the region. The exact amount that China contributes is difficult to determine, as China does not classify its assistance according to the OECD’s definition of ODA. Instead, Chinese aid is made up of grants, interest-free loans, and concessional loans, and it comes from a variety of sources, including the China Eximbank and the Lancang Mekong Cooperation Special Fund. Some of China’s aid comes in the form of pledges to lend,6, which further complicates the matter.  In addition, until 2018, China did not have a dedicated foreign aid agency. Prior to this, aid was administered through the Ministry of Commerce. In 2018, the China International Development Cooperation Agency (CIDCA) was established. CIDCA is a dedicated agency for managing foreign aid, and going forward, will be responsible for coordinating all aid. It should be noted that while Chinese aid is increasing, Chinese outbound investment amounts are much higher.7

China’s financing information is not openly and publicly available, so up to date information is hard to aggregate. Further, money allotted to development is not clearly separated from other official flows such as export credits, making it difficult to determine what amounts make up which type of financing. In addition, China announces its aid at specific project events rather than in annual reports, and often announces both aid and investment in one event.

One key difference between Chinese aid and western development aid is the focus: 75% of Chinese aid goes to natural resource and infrastructure projects, with less than a quarter to humanitarian work.8 It should be noted that observer estimates do vary, partly depending on what the observer considers a concessional loan. For example, JICA Research Institute has estimated China’s total “net foreign aid” at US$5.4 billion in 20139, while the RAND Corporation estimated China’s foreign aid programmes for 2013 at US$317 billion10 – a massive difference.

See below for a map of Chinese financial aid projects in the Lower Mekong, and explore the full profiles dataset here.

Although the China-led Asian Infrastructure Investment Bank does not have projects in all of the LMCs, the multilateral bank, which began operations in 2016, is specifically for infrastructure and is comprised of 97 member countries. This has increased China’s influence in infrastructure development and policy.

Although China is active in all five of the LMCs, it has contributed the most financing to Lao PDR.11 However, China has recently increased its activity in Cambodia significantly. UNDP indicates that China increased its ODA to Cambodia almost 10 times between 2006 to 2013 (from US$53 million to US$414 million12.  In February 2019, the Lancang Mekong Cooperation, through its Special Fund 2018, provided US$7.66 million to Cambodia for implementing 19 projects in 2018.13 This is on top of other Chinese trade investment, such as the agreements signed during the April 2019 Belt Road Initiative Forum.14

The charts above indicate the known amounts of financing that China provided to each of the LMCs, cumulative in the period 2000-2014. It is interesting to note that there is no difference between the known concessional financing that fits within the OECD definition provided to Lao PDR and Vietnam in this period and all known amounts of financing provided to these countries. However, in the period of time from 2014 to today, it is likely that many changes have occurred, but due to the above-noted challenges it has been difficult to acquire accurate information on China’s aid contributions. 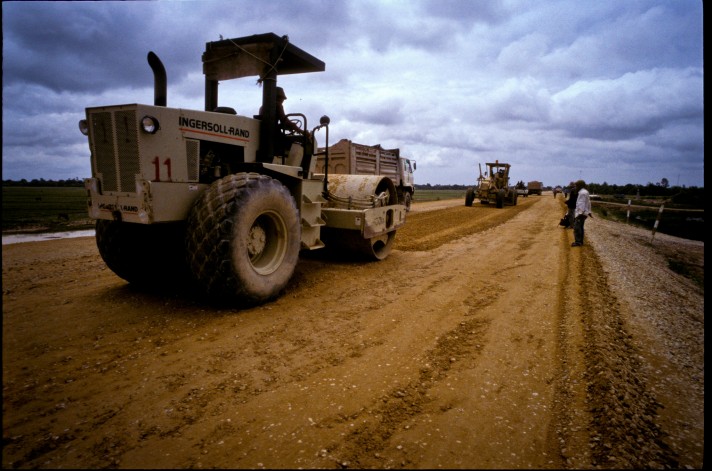 A man operates a bulldozer during the leveling of and upgrading of a road base in Cambodia. Photo by Asian Development Bank, taken on 15 February 2011. Licensed under CC BY-NC-ND 2.0.

Large projects, such as infrastructure development, have far-reaching and sometimes unintended effects. The environmental and social impact of such projects, such as the mass relocation of people living on affected lands,  sometimes results in criticism of the donors involved. In providing aid to promote economic development, responsible donors aim to balance the needs of governments, the private sector and the rights of local communities.

Both country donors and large institutions are sometimes criticised for the projects they support. In March 2017, the advocacy group Inclusive Development International (IDI) and partners released a report looking at the activities of the International Finance Corporation (IFC), the World Bank’s private-sector arm.16 It found that the IFC provides funding that supports development with profound environmental and social impacts, including displacing local populations and damaging their livelihoods. This is despite IFC’s purpose of reducing poverty through sustainable development and requirements that it protect people and the environment.

An important global guide to aid and development is the 2030 Agenda for Sustainable Development adopted at the United Nations Sustainable Development Summit in September 2015.17 The Agenda includes 17 Sustainable Development Goals (SDGs) – successors to the UN’s Millenium Development Goals that ended in December 2015. The 17 SDGs are: (1) No poverty (2) Zero hunger (3) Good health and well-being (4) Quality education (5) Gender equality (6) Clean water and sanitation (7) Affordable and clean energy (8) Decent work and economic growth (9) Industry, innovation and infrastructure (10) Reduced inequalities (11) Sustainable cities and communities (12) Responsible consumption and production (13) Climate action (14) Life below water (15) Life on land (16) Peace, justice and strong institutions and (17) Partnerships for the goals. There are 169 associated targets.

Each country localizes the programme, setting indicators against which local progress can be measured. The SDGs are then integrated into national planning.

Related to aid and development