Developing infrastructure in the Lower Mekong Countries (LMCs) is a major undertaking, requiring significant financial investment. In the LMCs, the main financiers, or entities that deal with large-scale investment, include both bilateral (country-to-country) investment, like from China, as well as multilateral (investors from more than one source) investment, such as through the Asian Development Bank (ADB). Investment can be concessional (defined as loans with interest rates lower than the market interest rates, and/or loans provided with a grace period1) as in the case of Official Development Aid (ODA), or it can be non-concessional (loans provided at market interest rates). Public-private partnerships (PPPs) are being strongly encouraged in the region.

Bilateral and multilateral infrastructure investment in the LMCs

Non-concessional financing with private financiers is being promoted as a way to obtain sufficient funding for infrastructure. For example, ADB encourages and supports PPPs in the LMCs. One such project is the Bangkok Mass Rapid Transit Project, monitored by ADB’s Private Sector Operation Department. It allows the private sector to invest in civil networks, while the Mass Rapid Transit Authority of Thailand will be responsible for providing land.3 The private parties include a Sino-Thai company. In addition, there are 32 non-sovereign or private sector projects registered with the ADB.4 The Asian Infrastructure Investment Bank (AIIB) has also prioritized mobilizing private capital for infrastructure, and thus includes on its roster a number of projects financed by private entities.5

However, concessional ODA, including from financiers like the ADB and AIIB and funds like the Global Fund, still accounts for the majority of infrastructure investment in the LMCs. Alongside investment into individual country projects, these financiers have been promoting regional cooperation between the LMCs for infrastructure development. For example, ADB has supported multilateral cooperation in the LMCs since 1992 with the Greater Mekong Subregion Economic Cooperation Program. The current focus of the concessional aspect of this program is on improving economic cooperation. Other ADB-supported projects are more country specific, such as the Central Mekong Delta Region Connectivity Technical Assistance Project. Focused on Vietnam, the project aims to improve connectivity of transportation services from Ho Chi Minh City to the Mekong Delta and the southern coastal regions. AIIB has strong regional involvement through the ADB’s Greater Mekong Subregion Economic Cooperation Program as well. It has also provided a concessional loan amount of $20 million to the Myingyan Power Plant Project in Myanmar.7

Some bilaterally funded initiatives also have a regional focus. The Lower Mekong Initiative (LMI), established by the US in 2009, is focused on enhancing cooperation between the LMCs.8 One pillar of the initiative focuses on connectivity, which aims to bring US technical expertise to the LMCs to help build infrastructure for information and communication technology (ICT), aviation, and energy. Administration of this pillar is co-chaired by the US and Lao PDR. The initiative features the Mekong Technology Innovation Generation and Entrepreneurship Resources (TIGERS), which connects different organizations in the LMCs to increase opportunities for investment in infrastructure, trade and environment.

As one of the largest trading partners of the Lower Mekong Countries,9 China has increasingly been enhancing its role in the Lower Mekong Countries. This is being accomplished not only by establishing Chinese-led institutional mechanisms, but also by pouring financing into the LMCs. While these funds can still generally be split into concessional and non-concessional, as well as bilateral and multilateral, it is not easily categorized into investments and foreign aid. Chinese “foreign aid” is defined differently from the OECD’s ODA, and is provided according to three mechanisms:

A map of Chinese Financial Aid Projects can be found by clicking here.

While China does provide funds to multilateral banks like ADB, direct government-to-government assistance is its preferred method of financing.11 Its aid also generally goes well beyond cash, from human resources and technical assistance, to official loans at market rates supported by the two state policy banks – China EximBank and the China Development Bank (CDB).12 These banks also support private investment on the form of loans to Chinese companies. These loans are problematic because they lack transparency – for example, the Lower Sesan 2 Hydropower Project in Cambodia is a non-concessional hydropower project built by a majority Chinese-held joint venture. 70% of its funding comes from an undisclosed bank loan, which is suspected to be from China. Built on a “Build-Operate-Transfer” model, this dam will sell energy back to Cambodia, and Cambodia will not gain ownership of the project until after 40 years.13 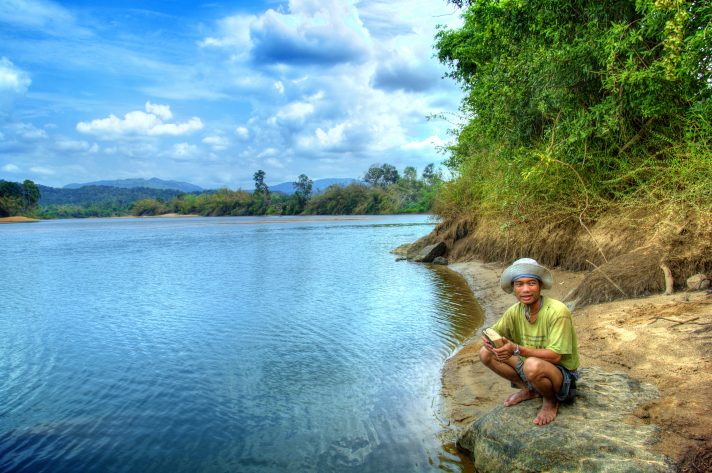 Man on the banks of the Sesan River in Northeastern Cambodia, the location of the Lower Sesan 2 Dam Project. Photo by Ethan Crowley, Flickr. Licensed under CC BY-NC-SA 2.0.

Furthermore, while multilateral development banks such as AIIB and World Bank have focused on investments in rail when it comes to infrastructure development, China EximBank and the CDB have emphasised both urban rail and roads. These two banks provide funds for much Chinese investment in the LMCs. For instance, China EximBank is the top funder and manager of the private equity based China-ASEAN Investment Cooperation Fund14. It has also provided a concessional loan worth USD 54 million to build a bridge over the Mekong River, connecting China to the LMCs,15 and contributed significantly to the No.76 National Highway Extension Line connecting northeastern Cambodia with its neighbouring countries in 2016.16 The CDB has also provided 5% of the funds to the Silk Road Fund, which supports China’s Belt and Road Initiative (BRI).

China’s involvement in the LMCs is significant not only because it is part of the general trend of China’s involvement globally, but also because it links China economically to the other countries along the Mekong River.17 Thus a lot of Chinese investment in the LMCs is regional in focus. For example, China has actively supported ADB’s GMS Economic Cooperation Program, especially regarding connectivity.18

In addition, China initiated the Lancang-Mekong Cooperation, a five-year plan aimed at improving the economic and social development of the LMCs.19 This partnership features a special fund, which will focus on five development areas: agricultural and poverty reduction, water resources, production capacity, cross-border economic cooperation, and connectivity. Connectivity projects are of particular importance, as they are based on large-scale infrastructure development involving cross-boundary cooperation. A significant amount of money has been pledged to this framework. In January 2018, Chinese premier Li Keqiang announced China would provide another 7 billion RMB (USD$1.08 billion) in government concessional loans to the Lancang-Mekong Cooperation framework, on top of the 10 billion RMB (USD$1.6 billion) already contributed in 2016. At the same time, Premier Li also pledged a USD$5 billion credit line in support of production capacity and equipment manufacturing cooperation in the LMCs, in addition to the first promise of USD$10 billion credit.20

Connectivity projects under the Lancang-Mekong Cooperation framework include the Kunming-Bangkok road and the China-Laos railway. These signature projects are also part of the larger-scale Belt and Road Initiative (BRI). The BRI is important as it would take advantage of infrastructure projects such as transportation and electricity to connect neighbouring economies to the Chinese economy, thus influencing the region politically.21 However, there have also been critiques against the BRI based on the claim that it lacks transparency, as well as the fact that it depends on unequal trading relations between China and other smaller powers.22