SEZs need infrastructure to connect with neighbouring countries, improve quality of life, and promote trade and investment.1 Both soft and hard infrastructure is needed. Soft infrastructure includes institutional components such as education, healthcare and human capital, whereas hard infrastructure is the physical ones such as roads, bridges, and telecommunications.2 Usually the former can help to develop the later. However, when promoted as a link to outside economies, as it has been in the Lower Mekong Countries, additional work needs to be done to actually use the SEZ as a bridge that connects the rest of the country it is in to bordering countries. 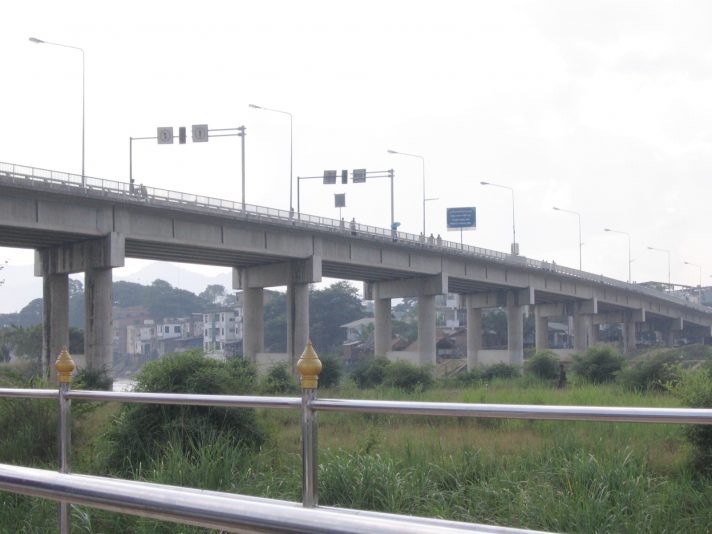 The Thai Myanmar Friendship Bridge is an example of hard infrastructure. Photo by Lerdsuwa via Wikimedia. Licensed under CC BY-SA 3.0.

For example, in Tak SEZ of Thailand, the local economy and the enterprises located in the SEZ appears to be poorly connected, and the goal of improving connectivity has not been fully reached. It is highly reliant on low-cost labour (regardless of origin) – about 8000 of the employees are foreign workers, compared with less than 2300 domestic workers, and most of the workers are semi-skilled, with training not usually provided.3 Tak SEZ produces mainly for the domestic market, with few linkages to the global market – for two thirds of the firms in the SEZ, over 90% of their export and import goes to or comes from domestic market.4 Yet, few of the firms in Tak SEZ use foreign investments for capital mobilization and technology upgrades.5 When interviewed by ADB about the perceived quality of business environment in Tak SEZ, one common concern which stands out is safety and consistency of government policy.6

A similar pattern is found in other SEZs in the LMCs, such as in Cambodia. Only 12% of inputs for production at SEZs are from domestic resources, and 27% of outputs go to domestic market.7 Governance, a form of soft infrastructure, is often poor.  At the same time, hard infrastructure to link the SEZ to other parts of the country is missing. Since firms investing in Cambodia’s SEZ are only responsible for investing in infrastructure inside the SEZ, the infrastructure outside of the SEZ lacks. ADB calls such SEZs without any link to domestic economy “little more than export-processing zones”.8 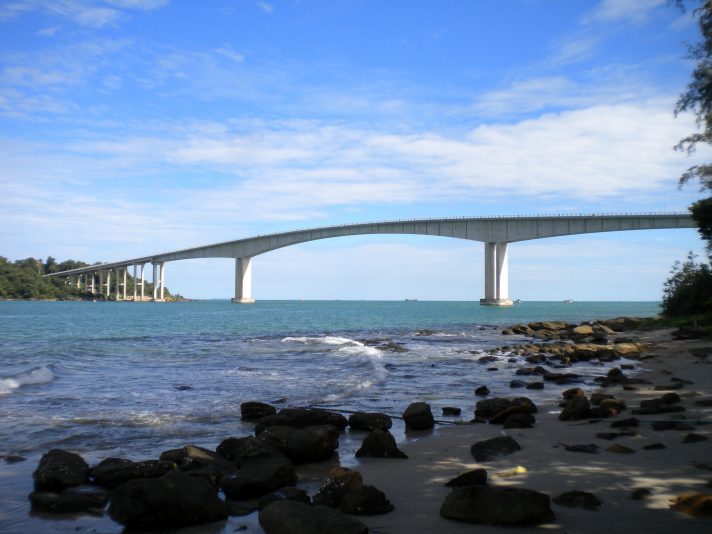 Bridge and roads at Sihanoukville SEZ. Photo by Wikirictor via Wikipedia. Licensed under CC BY-SA 3.0.

Some Impacts of Poor Infrastructure

In some LMC SEZs, poor hard infrastructure is an impediment to foreign investment. In Myanmar, development of SEZs is faced with a key challenge, sustainable electricity. While the price of electricity is low and therefore perhaps a benefit for investors, the price is financially unsustainable for Myanmar, with the Ministry of Electricity and Energy running on a loss; this situation has not changed over the years.9 A lack of staff housing in the SEZ poses another challenge, deterring many labourers from entering the SEZ.10

The infrastructure in SEZs may be poorly managed by the local government, with the result that these SEZs seem like segregated places with limited access to public services like power and roads. For example, because SEZs in Cambodia are almost entirely privately operated and managed, basic infrastructure in the SEZ such as electricity is being charged at a higher price than outside the SEZ, creating friction.11 Power interruptions occur often, requiring expensive backup generators.12 Myanmar SEZ are similar: 65% of the foreign firms in Thilawa SEZ report energy shortage to be a constraint.13 This gap in infrastructure also acts as a deterrent to potential investors. For instance, investors turn away from Myanmar since its infrastructure connecting to the neighbouring market Thailand is poor, and electricity supply is unstable.14

Aid contributions go some way to fill the infrastructure gap in SEZs. For instance, a bridge across the Mekong River connecting Phnom Penh to Kandal Province in Cambodia is being opened, with the financial assistance of South Korea.15 Villagers expect that this bridge will enable them to sell their products in Phnom Penh. However, while some SEZs are located where ports can easily be developed, lagging infrastructure holds them back. For instance, inland waterway and sea routes in Vietnam are not optimally used due to inadequate investment.16These waterways have the potential to connect the inland to seaport SEZs such as Van Don SEZ. Only 1% of the investment in infrastructure in this SEZ went to developing inland waterway transport.17 This can lead to unbalanced development between coastal SEZs and inland parts of the country.

The Need for Soft Infrastructure

However, new roads, waterways and bridges are only a part of an efficient transportation network. These networks operate only as well as the capacity of those working on it. Even though a newly built bridge had the potential to reduce the shipping time between Bangkok and Hanoi from two weeks to three days, limited capacity, along with bureaucratic and administrative bottlenecks, delayed the process by weeks.18 Procedural issues are another problem. There are frequent stops at customs by the police and as a result, long border delays.19 Thus, customs officials have requested more training related to one stop service centers for customs, single stop inspections, and e-custom procedures.20 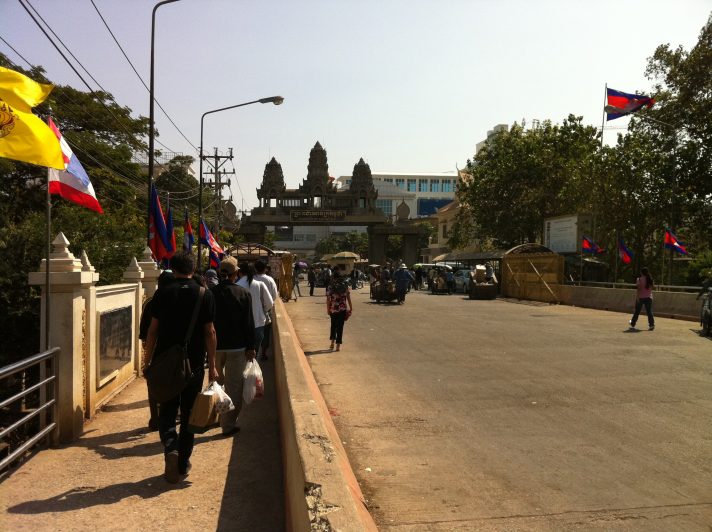 Border Crossing at Poipet, between Thailand and Cambodia. Photo by Jorge Láscar via Wikimedia. Licensed under CC BY 2.0.

These trainings, another type of soft infrastructure, can become a potential focus for aid. However, there is limited information disaggregated to this level of detail about aid flows to this kind of training. Yet there is a need: according to a survey conducted by the Mekong Institute, the most needed capacity building related to infrastructure for firms in LMC SEZs is on customs infrastructure, and cross-border issues.21

In addition, training is also needed to upgrade skills of the local labour force. Two successful models have been developed in the LMCs to enable skills upgrades. The first is the Thailand Plus One model, which was developed by Japanese companies in Thailand’s industrial zones. This model enables Japanese firms in Thailand to transfer technology as well as increase capital per worker to neighboring LMCs.22 The second is the Vietnam Plus One model, which features a “train the trainer” program, to help develop skills transfer and retention of skilled labour.23 These programs have been positive for countries that are low in skilled labour, such as Laos.24

Despite these programs, challenges remain, including the lack of technology infrastructure, low R&D spending, and limited vocational and technical skills.25 The LMCs have also had difficulty attracting foreign investment due to a lack of skilled labour. In Myanmar, insufficient skilled labour prevents advanced manufacturing industries and import substitution business from flourishing.26 Improving such soft infrastructure can help to better link SEZs with the neighboring countries, including by promoting investor and trade confidence.

Infrastructure relevant to health, from physical structures to skills and knowledge, is also needed. However, this is frequently neglected by investors in SEZs. For example, in Myanmar’s Thilawa SEZ, only two out of the 82 approved investors do business related to managing health risks, one in medicine and one in waste management.27 None of Cambodia’s four SEZs (Phnom Penh SEZ, Sihanoukville SEZ, Poipet O’neang SEZ and Koh Kong SEZ) have yet approved an investor conducting business in health-related industry. However, ADB indicates that SEZs can bring health risks such as hazardous waste for local communities in the Mekong Region.28 Since most SEZs are located in outlying areas, both hard infrastructure such as roads, and soft infrastructure such as waste management are less developed than in urban areas.29 Infrastructure that needs more investment includes disease data collection systems, water sanitation systems, waste management facilities, good-conditioned roads, and health services.30 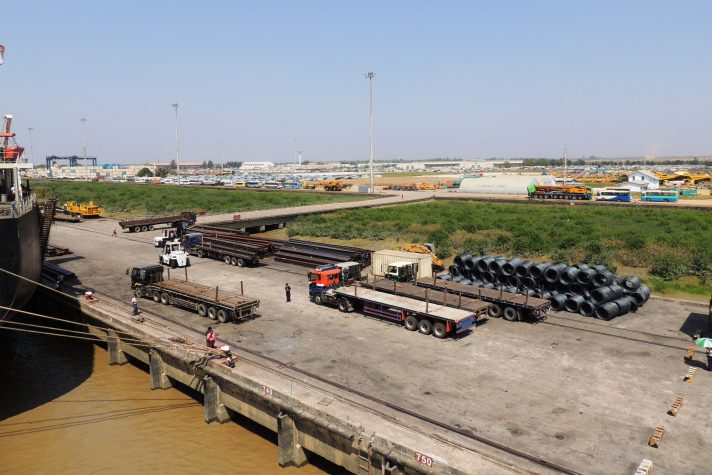 The Thilawa Terminal is adjacent to the soon-to-be opened Thilawa SEZ. Photo by Harry and Rowena Kennedy via Flickr. Licensed under CC BY-NC-ND 2.0.

Even though there are some international and local NGOs that aim to fill the gap between the high demand of sanitation and small proportion of ODA devoted to health, their impacts are still limited due to insufficient funding. Mismanagement of funds can be another challenge. In Myanmar, organizations helping local communities in sanitation improvement are faced with the challenge of layered accounting procedures, since they have limited funding and capacity to develop a financial management team.31 Donor benchmarks sometimes do not take into account these on the ground realities. These benchmarks are set to assess the success of the aid in health, but not effectiveness or sustainability. For example, WTO has multiple targets for aid in sanitation and health, including coverage for drinking-water supply, hygiene promotion and sanitation.32 While Myanmar turns out to be doing quite well in terms of meeting the target, the human capital and financial management of healthcare, as mentioned above, is still lacking. Thus, more programs emphasising monitoring is needed. For example, the Vietnam Rural Sanitation and Hygiene Program implemented by UNICEF seeks to ensure that infrastructure necessary for the sustainability of aid is in place. This includes training materials, standards for open defecation free (ODF) verification and certification, and capability of staff.33 Such programs could help SEZs be more sustainable and beneficial for local communities.