SDG 7 – “Ensure access to affordable, reliable, sustainable and modern energy for all” – has a monitoring framework with five targets and six indicators. These will be used to monitor progress toward achieving global sustainable energy access as part of the 2030 Agenda.

The means of implementation, focusing on financial issues, are addressed as well, in Targets 7.A and 7.B. Efforts required to achieve this goal include reducing demand and using a larger proportion of energy from cleaner sources.1

This goal will be reviewed at the High Level Political Forum in July 2018, along with SDGs 6 (Clean Water and Sanitation), 11 (Sustainable Cities and Communities), 12 (Responsible Consumption and Production), and 15 (Life on Land). SDG 17 (Partnerships for the Goals) is reviewed annually.

Rural populations in these countries have disproportionately low access to electricity, and also lack access to clean cooking and heating fuels.6 Women and children are vulnerable, feeling the effect of energy poverty more than men.7

SDG 7 refers to “modern energy”. This generally means non-solid fuels such as biogas, while solid fuels such as charcoal are generally considered polluting and non-modern. Both the International Energy Agency8 and the World Health Organisation (WHO)9 focus their definitions primarily on access to modern cooking fuels. However, rather than referring to “non-solid fuels”, WHO (the custodian agency for SDG 7.1.2) defines modern energy as “access to clean fuels and technologies”. While data is currently only collected on cooking fuels, data will eventually be collected on other energy uses, such as heating and lighting.10 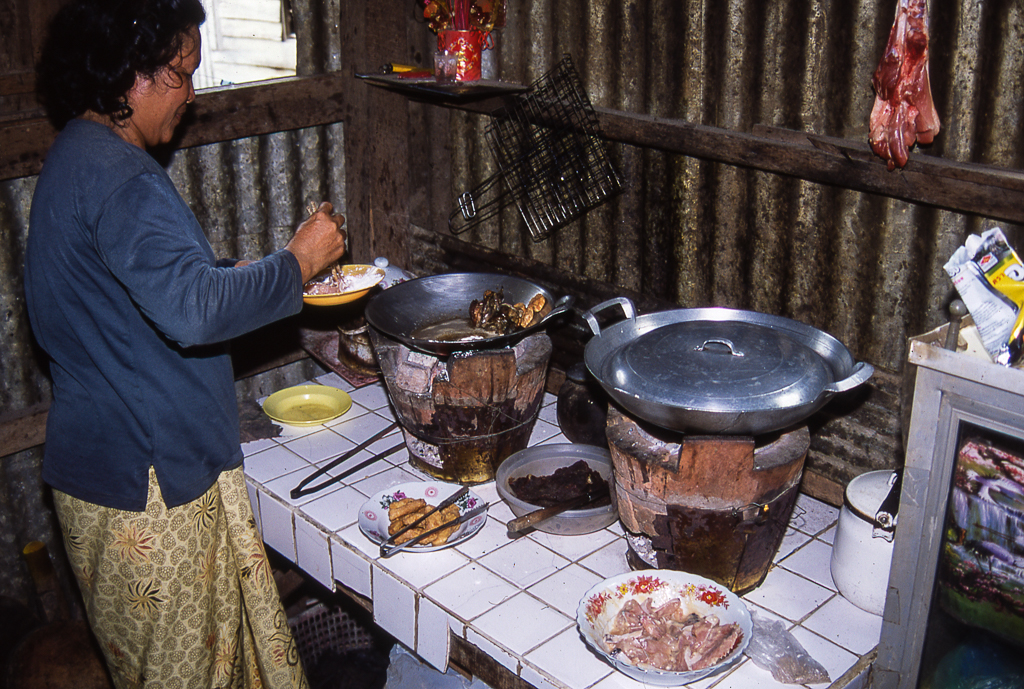 Sisaphon, Cambodia. August 2003. This two-stove white-tile kitchen is in the home of Master Performer Nong Chok, an opera singer and teacher who survived the Khmer Rouge. His wife cooks up a special meal in the well ventilated rear room of the house. The 3-point bucket stove is the most common cooking device in urban homes. Perfect for a wok or a pot of rice, its fuel – charcoal or wood – is added through an opening at the base.
Photo by Alan Morgan. Licensed under CC BY-NC-ND 2.0.

As part of the water-energy-food nexus with SDGs 2 (Zero Hunger) and 6 (Clean Water and Sanitation), SDG 7 plays an essential role in achieving all of the other SDGs. 125 of 169 targets included in the SDGs are linked to energy.11 Increasing energy consumption, especially the burning of fossil fuels, has significant social and environmental consequences and costs. For instance, air pollution caused by use of fossil fuels damages people’s health and also adversely affects the growth potential of economies in the Asia-Pacific region.12 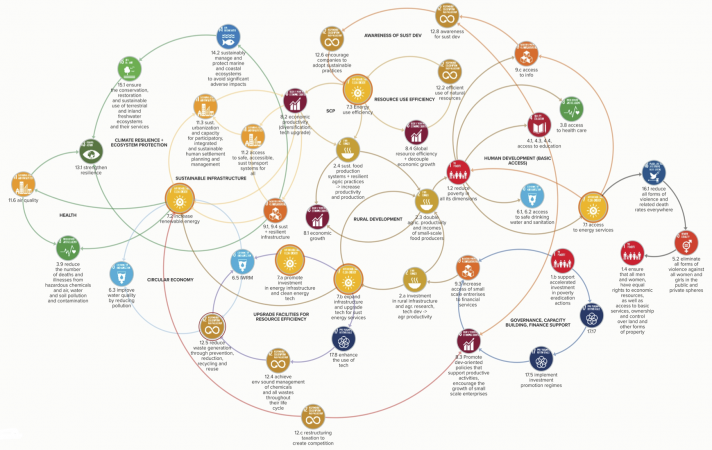 SDG 15 is interlinked with many of the other SDGs. This map is not comprehensive and shows only some of the interlinkages. Source: UNESCAP. Accessed May 16, 2018.

National energy policies of the Lower Mekong countries indicate a willingness to align with the targets of Goal 7 and related SDGs. The reality, however, is that significant financial resources still need to be invested in infrastructure and technology (Target 7.B.1) to effectively ensure access to energy, especially for Cambodia, Laos and Myanmar. Official development asssitance for least developed countries will continue to be necessary.16 Public and private sector financing will be key sources for renewable energy development and energy efficiency.17 Governments can encourage investment by developing incentives for clean energy and reduce risk by maintaining a stable regulatory environment.18 A lack of harmonized standards across the LMCs compounds the risk, as it leads to economic inefficiency of investments and high transaction costs. To combat this, integrated, cross-sectoral approaches are necessary, as is a commitment to regional cooperation.19

Additional work to meet Target 7.A will also be necessary. (“By 2030, enhance international cooperation to facilitate access to clean energy research and technology, including renewable energy, energy efficiency and advanced and cleaner fossil-fuel technology, and promote investment in energy infrastructure and clean energy technology.”) Here too, regional cooperation will be needed, and both ESCAP (the Economic and Social Commission for Asia and the Pacific)20 and ASEAN (Association of Southeast Asian Nations)21 have identified this a step to implementing SDG 7 for their member countries.

Data for both of these targets are not yet available.

Based on existing and planned policies, the Asia-Pacific region will achieve only the most basic level of near universal electricity access by 2030.22 As the region makes up 60 percent of the world’s total population, regional success in SDG 7 will have a great impact on global success.23

The Asia-Pacific region is characterized by growing energy demands, a strong reliance on unsustainable energy sources, and marked inequalities in access to electricity.24 In the LMCs, three countries are still considered least developed countries – Cambodia, Myanmar, and Lao PDR. They will continue to see an expansion in economic development and thus, energy needs. Infrastructure and grid-related issues and regulatory and administrative hurdles are major impediments to the deployment of renewable energy, which remains at near standstill despite significant cost reductions in recent years.25 Inequalities in access to electricity continue to be a major problem. Ten percent of ASEAN’s 64 million people lack access to electricity, and of these, over 2.13 million rely on non-modern fuels for cooking.26

In the LMCs, universal electrification remains a priority for Cambodia, Myanmar, and Lao PDR,27 while grid access to electricity in a modern energy system is already virtually universal in Thailand and Vietnam.28 Countries with a comparatively low access to grid electricity, like Cambodia, also have large disparities in access between urban and rural areas. While 97 percent of urban residents in Cambodia had access to electricity in 2012, this was the case for only 18 percent of rural residents.29

Overall progress in this goal for ASEAN has been better than expected.30 For example, access to electricity has expanded in Myanmar, Cambodia, and Laos, partly due to increasing electricity production from hydropower plants (and coal-fired plants in Cambodia).31,32 This is controversial, however. Hydropower potential has been identified as a source of clean energy, recognized by the Clean Development Mechanism. Yet there is no uniform definition of renewable energy, and large hydropower plants can have undesirable environmental and social impacts.33 Work on increasing access to energy supply and clean fuels and technology for ASEAN needs to be accelerated.34

Each Lower Mekong country has unique needs. Laos, as a landlocked country, faces the geographical challenges of no seaports and remoteness and isolation from world markets.35 Thailand, on the other hand, has already achieved universal electrification targets and is working on developing an efficient energy system that integrates new and renewable energy, smart grids, energy storage technology, small power producers, hybrid firms and electric vehicles.36

Access to clean cooking fuels and technologies ranges from as low as 6 percent of the population in Laos (2016), to 74 percent in Thailand (2016).37 Conversely, use of renewable energy forms only 22.9 percent of Thailand’s total energy consumption, the lowest proportion in the LMCs in 2015, while Cambodia uses 64.9 percent of renewable energy in its energy mix.38 Thailand leads the way in installed solar power generating capacity, with growth from 49MW in 2010 to 2753MW as of September 2016.39 UNESCAP emphasizes the need for national as well as regional targets to meet consumer needs and cultural preferences.40 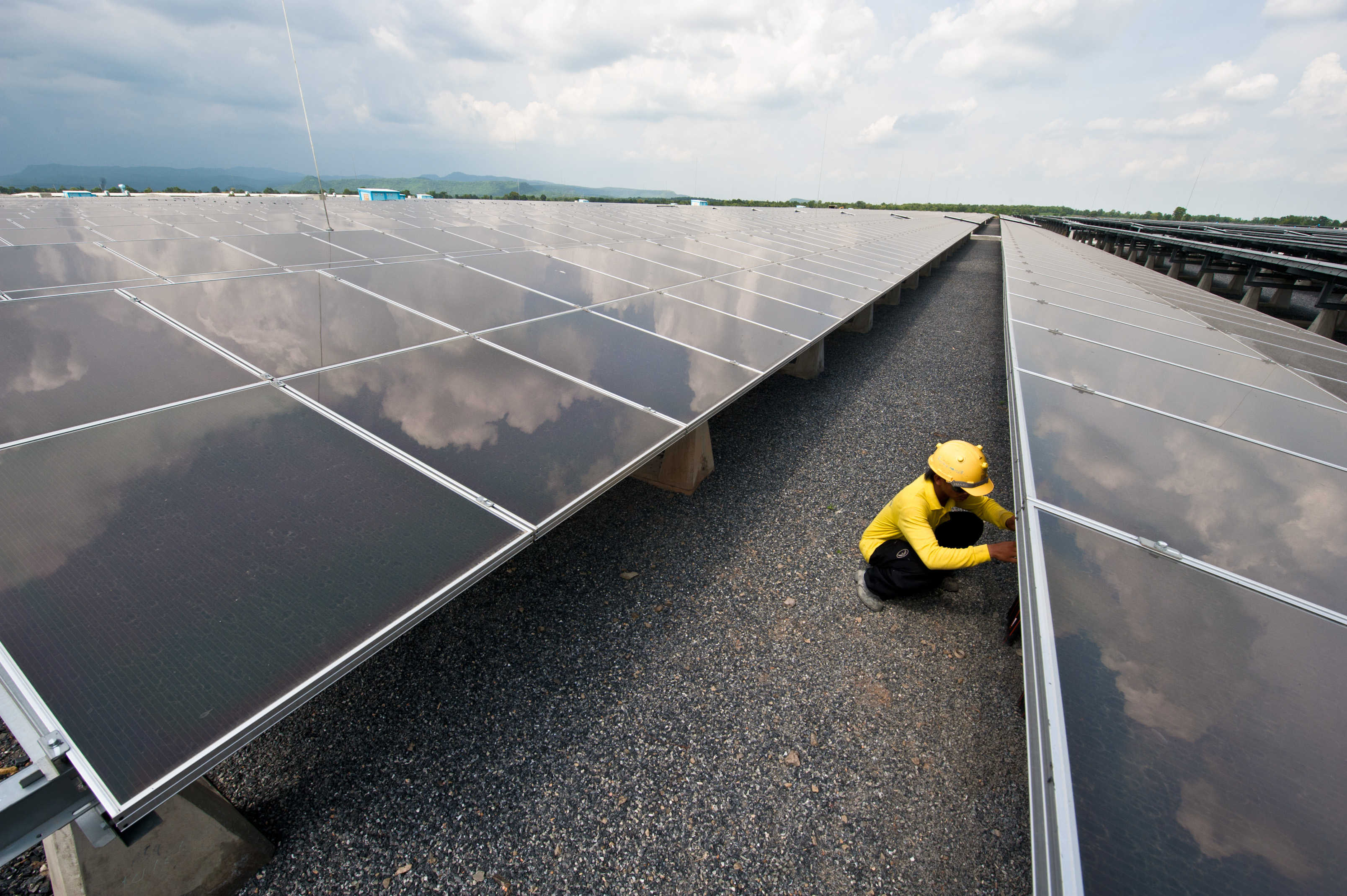 Building energy infrastructure is expensive and sometimes involves trans-boundary projects, requiring coordination between locations with resources and those who need them. Impacts such as air pollution can only be managed by regional cooperation. Under the recommendation of the Asia-Pacific Forum on Sustainable Development (APFSD)41, ESCAP has established the intergovernmental Committee on Energy to facilitate regional energy governance. The next step for this group will be to develop a regional cooperation framework.42

The Asian and Pacific Energy Forum was also established43 as a platform to promote regional cooperation for energy security and the sustainable use of energy in the region. The forum met in 2018 for the second time to review progress on SDG 7.44 Attendees of this meeting made a renewed and targeted commitment to providing regional capacity-building support. They also encouraged increasing the available baseline data and information necessary for addressing the energy inequalities standing in the way of achieving SDG 7. Promised activities include assisting countries with developing national road maps for implementing SDG 7, supporting expert working groups and conducting studies on key energy trends and issues for the region.45

ASEAN has also included energy on its policy agenda. The Master Plan on ASEAN Connectivity 2025 overlaps with SDG 7 in four of ASEAN’s five key areas: poverty eradication, infrastructure and connectivity, sustainable management of natural resources and sustainable consumption and production.46 Some specific recommendations include consciously shifting investment to renewable generation and storage to ensure that economic growth can be balanced with environmental protection, as it is expected that a lot of energy infrastructure will be built in ASEAN countries in the coming decades.47

Noting a lack of financial and human capital, ASEAN promotes development cooperation to assist in providing better services in rural and remote areas in the least developed ASEAN member countries, including Cambodia, Myanmar and Lao PDR.48 ASEAN has suggested establishing a regional infrastructure council that supports planning, establishes technical standards and sets criteria for quality expectations and the adaptiveness of infrastructure development in the region. This council would help coordinate infrastructure development, including that for energy, across the ASEAN region.49

There are six global custodian agencies for SDG 7:

These bodies are responsible for collecting data and reporting on SDG 7 indicators. All of them, with the exception of OECD, jointly produce “The Energy Progress Report”, which reports on global, regional and country-level progress in the targets of SDG 7. This is the successor to the “Global Tracking Framework”, previously produced under the Sustainable Energy for All initiative.50 Global data on SDG 7 is made publicly available by the custodian agencies as well as ESCAP, although recent LMC data is not yet available through ESCAP.

Baseline data exists for at least half of the countries and of the populations in every region where the indicator is relevant for all four of the substantive indicators. At the Asia-Pacific regional level, SDG 7, SDG 8 (Decent Work and Economic Growth) and SDG 9 (Industry, Innovation and Infrastructure) have more baseline data than other goals.51 However, the two means of implementation indicators are lacking. As at May 2018, Indicator 7.A.1 has an internationally established methodology and standards but no baseline data, while indicator 7.B.1 remains lacking in both methodology and baseline data.52 It is expected that work on the methodology for 7.B.1 will be completed by 2019.53

Improvements to tracking SDG 7 need to be made. The custodian agencies for SDG 7 note that household survey questionnaires need to more accurately reflect the nature and quality of service for electricity and clean cooking.54 In addition, it is not possible to track the affordability and reliability of energy access using the current indicators, and technological advances in solar power are making it difficult to accurately reflect trends in rural electrification.55 Equally important is to strengthen statistical capacity, particularly in the developing countries, and to conduct research on the energy efficiency of consuming sectors outside of the major economies to inform policy interventions.56