Infrastructure development has both positive and negative impacts on many different communities. Such development can take up large amounts of land and require many people to move. They impact various segments of communities differently, especially women. For instance, women are rarely represented in public participation processes for infrastructure projects that significantly impact water, like dams and mines. Yet, women are more likely to collect water for their families, so would notice shifts to water quality first.1 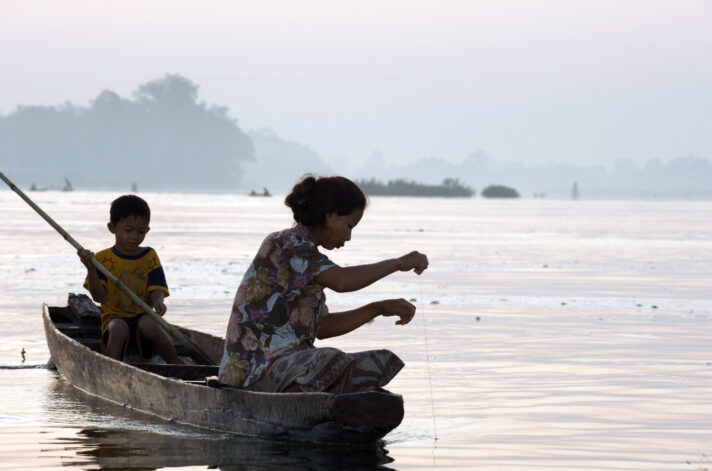 Women in the Mekong often participate in the economy by fishing, a livelihood that is highly impacted by infrastructure development such as dams. In this case a woman takes care of her child while fishing. Photo by Patrick Dugan via Flickr. Licensed under CC BY-NC-ND 2.0.

Gender mainstreaming is slowly becoming a required element in projects financed by regional development banks, such as the Asian Development Bank. However, implementation remains simplistic. For instance, ADB infrastructure projects are required to include a “Gender Equity and Mainstreaming” element. Some projects address this by simply filling in, “Some gender elements”.2

Each of the Mekong countries has its unique challenges. Yet, regional patterns emerge. The Lower Mekong Region sees a combination of cultural expectations, gaps in education and literacy levels, and limited access to information creating a disparity between men and women, and between women of different demographics.

It is easiest to understand gender impacts of infrastructure by looking at a project stage by stage. While each project is different, most generally follow the same stages to completion. These stages include Project Scoping, Assessment, Approval, Construction, and Post-Construction.

Project scoping involves figuring out what need could be met by a project, and designing the project. Initial cost estimates are made, and project financiers are found.

Involving women during this stage includes addressing women’s agendas in project design. However, culturally embedded beliefs, while an important part of society, may also contribute negatively to gender-responsive project design. For instance, Cambodian, Laos, and Vietnamese culture considers it unseemly for women to study science, including engineering. Thus, fewer women are represented in this field. The result is that women’s engagement in infrastructure design, if included, is discounted.3

Some aid programs aim to address the gender gap in the sciences. For instance, USAID works in the LMCs to promote women in the fields of Science, Technology, Engineering, and Mathematics (STEM). It has invested in training female scientists by providing scholarships for Vietnamese women engineers, exchanges for women, and facilitating technical exchanges among partner countries.4 In time, this may mean that more women are included in infrastructure project design. 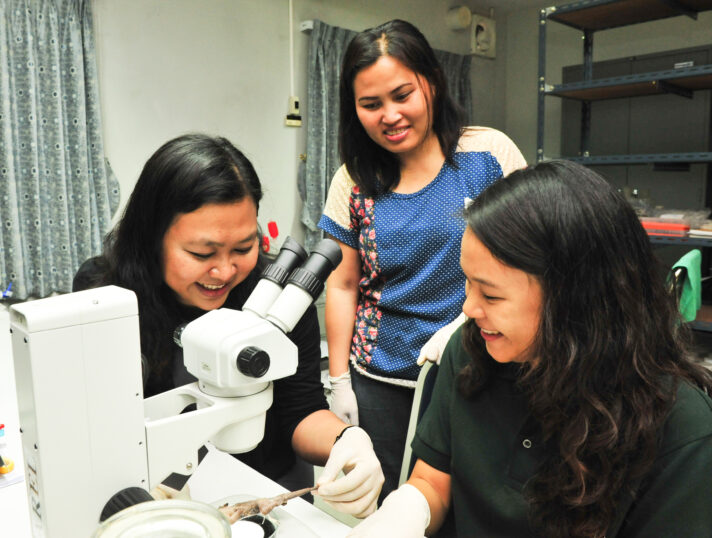 Women scientists work in USAID Partnerships for Enhanced Engagement in Research Science project on “Biodiversity and conservation in the Lower Mekong: empowering female herpetologists through capacity building and regional networking” at Kasetsart University’s lab in Thailand. Photo by Richard Nyberg/USAID via Flickr. Licensed under CC BY-NC 2.0.

In addition, little focus is placed on women’s opinions and needs when designing infrastructure.5 International development agencies like the World Bank6, OECD7, and the International Alliance of Women8 acknowledge that women are impacted differently than men with respect to infrastructure use. Yet, these differences are not usually explicitly considered. For instance, the AC Energy Green Bond project, sponsored by the ADB, defines itself as a renewable energy project which can boost economic growth and might “directly or indirectly” narrow gender gaps.9 However, this project does not specifically promote gender equity by providing women with explicit opportunities, services or resources, or use inclusive language.

Public participation processes, now mandated by law in the LMCs, are another way that women can make their voices heard during this stage of project development. However, these processes are often ineffective. For instance, there is no requirement to meaningfully address power imbalances due to different language abilities or educational achievement causing women to be shut out of discussions. The education gender gap in the LMCs varies, but all rank in the bottom half globally. Laos and Cambodia rank 105 and 119, respectively, among 149 countries; Vietnam 101; Myanmar 98; and Thailand, the most developed of the LMCs, 81/149.10

Furthermore, so-called “super-infrastructure” projects are commonly located far from urban metropolises. Rural areas in the Lower Mekong Region continue to have lower levels of education, literacy and other capacity elements. In addition, the population of the LMCs remains predominantly rural and many living there are ethnic minorities or indigenous peoples. This means more rural people are impacted by infrastructure development, and these impacts add onto existing gender issues to make rural women disproportionately vulnerable. 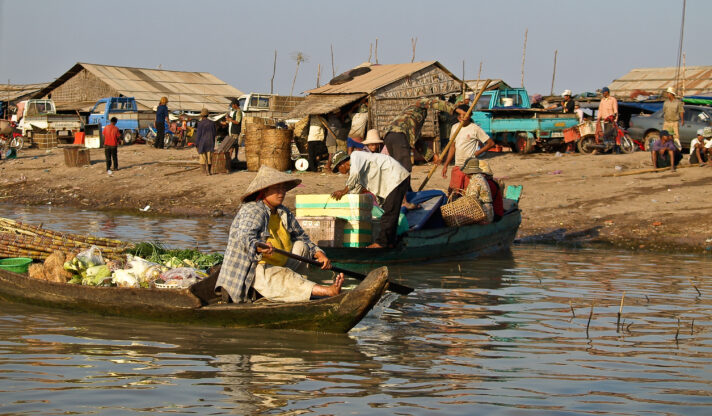 Rural women, such as these Cambodia women dependent on the Tonle Sap, are particularly vulnerable to the impacts of infrastructure development. Photo by Anguskirk via Flickr. Licensed under CC BY-NC-ND 2.0.

Together, these elements mean that women are limited in their ability to take advantage of the benefits that infrastructure projects could bring. An example of the benefit can be seen in small-scale renewable energy and transport infrastructure projects. The gendered division of labor and the predominance of traditional cooking methods in many areas in the LMCs mean that women are disproportionately responsible for collecting water and wood. Clean stoves and improved roads could reduce the time women take to collect water and wood, allowing them time to attend school, improve agricultural production, or take on informal home-based enterprises if they desire.11

Some programs have been initiated to consider women’s needs when developing new energy infrastructure projects. The Power to Poor (P2P) Program, initiated by Electricité du Laos (EDL), uses gender-sensitive poverty criterion to target those in need of electric assistance in Laos, especially female-headed households.12 This program conducted consultation and participation inclusive of women, and presents information on electricity in an accessible way.13

During project assessment, the environmental and social elements of a project are assessed. Examples of environmental impacts include minerals leaking into land, dams changing water flows, or air pollution from coal smelters. Social impacts include forced migration due to mine development, livelihoods being impacted by changing waterways, or increased asthma due to air pollution. Women are disproportionately impacted when they are migrated to locations far from a market where they might have sold goods, because their livelihoods are often more precarious than men, and because as primary caregivers they may not be able to take care of their health as well. 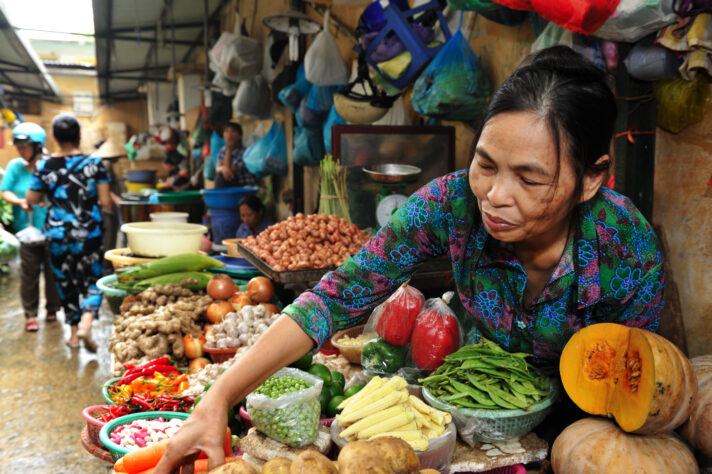 Women impacted by infrastructure development may suffer if they are relocated far from a market where they sell products. Photo by UN Women Asia and the Pacific via Flickr. Licensed under CC BY-NC-ND 2.0.

This stage is also another opportunity for public participation. However, opinions differ between the project proponent and community members on how this should be done, contributing to dissatisfaction around large projects. For instance, regarding the Don Sahong hydropower dam project, located in Laos, 500 women supported by Oxfam and GreenID, participated in community consultations to express their concerns over this project.14 Despite this, they felt that the final project result did not sufficiently take into account their concerns.

In order for project assessment processes to be responsive to gender, national policies mandating them need to have a gender element. For instance, Laos’ 8th Five-Year National Socio-economic Development Plan 2016-2020 does not mention gender in the context of national energy development. Cambodia’s Guideline for formulating the National Strategic Development Plan 2019-2023 references gender, but not in the context of projects.15, 16

At the project approval phase, a project should have completed and passed any legally required assessments. The government entity in the sector responsible for the project will issue an approval to the project proponent. While legislation may require this approval to be announced in an open and public way, in reality such announcements do not reach all affected people. For instance, those living at the project site may not have access to media or internet. In combination with being located far from the national capital where governmental processes take place, they may not know that a decision has been made. If an announcement is made in print, impacted stakeholders may not be able to read it, whether because of literacy issues, or because it is not in a language they understand. Women, especially those who live in rural areas, are statistically less literate and educated than men, but also disproportionately represented in activities that may be impacted by the approval, such as water collection or agricultural work.

Construction begins after approval has been received, and the length of time it takes varies widely. Impacts of construction should have been envisioned in preparation for assessment, but approvals may be given despite knowing that there will be significant impacts.

One major cause of impacts at this stage is the relocation of those living on the proposed project site. Historically, this has caused land conflicts and resulted in the loss of livelihoods. For example, the Nam Ou River in Laos was chosen as a site for a dam project by Chinese developer PowerChina Resources. Women living in villages on the Nam Ou River made a living collecting and selling a particular freshwater weed grown in the riverbed. Required to leave due to the construction of the dam, these women lost their main source of income.17 Monetary compensation, while provided, did not account for this loss. Of course, not all women take issue with the loss of a traditional livelihood. However, for others, these changes have greater impacts. Low ability to compensate for the loss of a traditional livelihood is related to lower education and lower levels of experience with different livelihood skills.18

Further, relocation sometimes means being sent to a location far from one’s original community. This impacts a family’s ability to access natural resources that sustain their livelihoods, thus also impacting their ability to cope with changes.19Distances to traditionally accessed water and food resources may be quite far. As women are by far the ones who take care of water, food, and home, these changes have significantly greater impact on women than men. 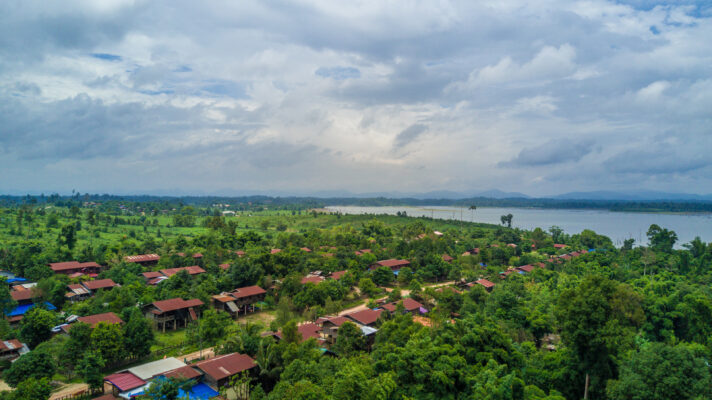 Aerial view of resettlement areas along the Nakai Reservoir in Lao PDR. Photo by Asian Development Bank via Flickr. Licensed under CC BY-NC 2.0.

Once the project is built it becomes operational. At this point, any impacts on women identified at previous stages, but remaining unaddressed, continue to have an impact. Unidentified issues, like gendered needs, may plague the project. Overall, these issues lead to a continuation, and perhaps a growth, of gender disparity. On the other hand, an inclusively designed project may have the potential to reduce gender differences and increase gender equity.