Since the establishment of the Shenzhen SEZ in China during the 1980s, Special Economic Zones (SEZs) as a development model have grown in popularity in Asia, alongside official development aid. SEZs have been promoted as being a resilient form of economic development, with the potential to involve local communities.1 They are targeted toward foreign investors, especially through beneficial policies and regulations.2 Although financing for SEZs is distinct from development aid, the two have significant overlap. 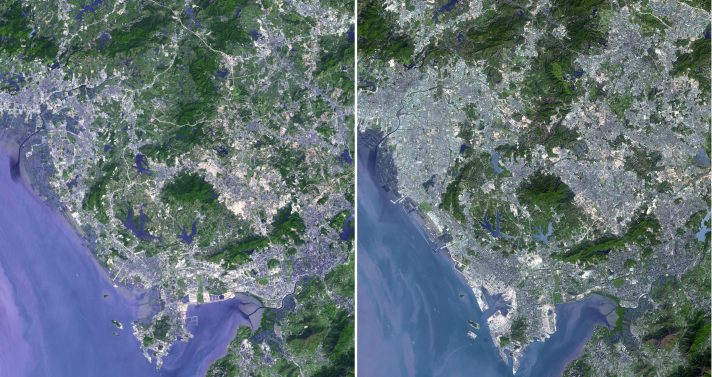 Shenzhen, previously a small fishing village, was developed into an SEZ in the 1980s. It is now one of the busiest ports and cities in the world. This image shows the level of Shenzhen’s development in 1999 on the left, and in 2008 on the right. Image by NASA. Image may be used for any purpose without prior permission with the exception of special cases indicated here.

How SEZs are used and promoted

In general, SEZs are intended to foster competitive development of a country, a region or an urban area.3 This goal overlaps with the aim of aid, which is to promote economic development and welfare.4 In the Lower Mekong Countries, SEZs are specifically intended to promote cross-border trade through export-oriented manufacturing, by encouraging domestic and international investment in specific locations.5 For instance, the cross-border economic zone in the Golden Triangle of Thailand, Laos and Myanmar, developed under the Lancang-Mekong Cooperation scheme. It was envisioned to expand economic links for Thailand, Myanmar, Laos and China.6 Development aid can contribute to this in various ways, such as by connecting different economies with relevant infrastructure. For instance, 75% of Chinese aid goes to developing natural resources and building infrastructure.7 Approximately half of this aid contributed to transportation infrastructure such as road construction.8 With more highways connecting one country to another, cross-border trade can flourish.

At the Golden Triangle of Myanmar, Thailand and Laos there is a cross-border Special Economic Zone. Photo by Anthony Tong Lee via Flickr. Licensed under CC BY-ND 2.0.

SEZs are promoted by multilateral development banks like Asia Development Bank (ADB) as development tools to be used alongside official development aid. ADB suggests that, if designed and regulated properly, SEZs could bring in foreign investment, encourage better policy reforms, and improve domestic industries.9 However, development through SEZs may not be so inclusive of local communities. In reality, there are few links between the SEZ and the local economy it is in.10 For example, in Cambodia, an SEZ is located at the Greater Mekong Subregion (GMS) corridor, which is well placed for border trade. However, the government has not done enough to make use of its potential.11

In addition, SEZs do not usually provide opportunities for skills upgrades for local employees. As a report by ADB shows, a large proportion of local employees in Tak SEZ (Thailand) are semi-skilled laborers, and only a small proportion are non-production workers (e.g., management, sales and administration).12 Finally, large amounts of money have been invested in increasing the potential for foreign investment and international export, with a disproportionately low amount of attention being paid to whether such investments will be beneficial for local communities. For example, large-scale service industries, like casinos, are planned in the three proposed SEZs in Vietnam, including the Van Don SEZ.13 It is estimated that $12 billion is needed to develop the Van Don SEZ, half of which should come from domestic resources. 14 In a country where GDP per capita is only $2342.20,15 such spending, without explicit benefit to local communities, is significant.  An additional $330 million will be invested into developing an international airport.16

Official development aid goes some way to fill this gap. In fact, there is some overlap of financiers of development aid with investors in SEZ in the LMCs. Top financiers of official development aid (ODA) in the LMCs are Japan, ADB, Korea, China, U.S, EU, and the Global Fund.17 Japan and China are also major investors in SEZs in the region. In Cambodia, Chinese investors make up the biggest portion of foreign investments in SEZs, which accounted for 29.92% of all foreign investment in 2016, followed by Japan 22.78% and Thailand 4.61%.18 In Myanmar SEZs, the biggest investor is Singapore, with $452.91 million invested at Thilawa SEZ, followed by Japan ($361.05 million), and Thailand ($125.31 million).19 In Laos SEZs,  29 of the 51 companies are from China, followed by Thailand and Lao (5 companies each), Malaysia (3 companies) and Singapore (2 companies).20

Only some of the LMCs are visualized here due to availability of data.

Infrastructure is necessary to connect the SEZ with the rest of the country. However, this development does not always keep pace with the development of the SEZ. Generally, high trade costs can mean poor-quality transportation infrastructure. However, substantial investment in road improvements does not guarantee good trade due to poor soft infrastructure (defined as institutions that are essential to the economy such as governance, health and education21) in the LMCs. Examples of issues include lengthy border delays and frequent stops by the police.22 Thus, development aid dedicated to social infrastructure like governance and regulation may be conducive to more inclusive SEZ development.

If development aid is used to facilitate infrastructure development around SEZs, there can be an increase of connectivity. For example, before the establishment of East-West Economic Corridor, many Thai traders took boats across the Mekong River to sell their items in Vietnam, which took a long time.23 But after a bridge was built, traders took buses or cars instead, which was more time efficient. Thus, as prioritized by Chinese investors, hard infrastructure projects as a form of development aid such as roads can promote connectivity of local communities.

However, simply having such installations is not enough, since low skills, poor technology uptake, or limited understanding of regulations by local communities may mean that the increased connectivity cannot be used. For example, the three proposed SEZs in Vietnam bring with them the mission to build “smart cities”, with a focus on high-tech industries.[ref]Nhan Dan. 2019. Developing smart cities in Vietnam. Accessed July 4th, 2019.[/ref] However, this does not necessarily benefit all, as consultations are less than inclusive, and these smart cities will not be accessed by all.24 Digital awareness and system synchronization in Vietnam remains lacking, despite ODA into smart city development.25 In addition, there is a lack of skilled labor in Vietnamese market, which could limit the benefit of high-tech industries for Vietnamese workers and citizens.26 In general, however, SEZ financiers pay only limited attention to improving local people’s access to technology. In this circumstance, aid directed towards soft infrastructure is helpful. Japanese aid in Cambodia is an interesting case, as the country has provided aid to establish SEZs.27 In 2016, Japanese ODA to Cambodia included $1084 million in loan aid, $1831 million in grant aid, and $808 million in technical assistance.28 The Phnom Penh SEZ’s facilities are supported by the Minebea industrial zone, where Japanese firms have created an environment of learning and capacity building.29

The Second Thai-Lao Friendship Bridge connects the two countries and is near the Savan-Seno SEZ in Lao PDR. Photo by Premica Pata via Wikimedia. Licensed under GNU Free Documentation License Version 1.2.

Indeed, while SEZ brings about more employment opportunities, it does not necessarily empower local people to benefit from businesses in SEZ. While as mentioned above, most financiers prioritize infrastructure in SEZ, in some SEZs, in order to attract more attention from foreign investors, governments prioritize entertainment businesses. For example, the Savan-Seno SEZ in Laos remained a place primarily filled by casinos and hotels during the first several years after the opening of the second Thai-Lao Friendship Bridge in 2007. Critics connect this to issues around sex work and child labour around the SEZ.30 In addition, despite the fact that much aid is provided for economic infrastructure, including energy, they do not necessarily benefit the local people. SEZs in Myanmar, for example, are considered to be part of the Belt Road Initiative, and some of the SEZs export gas to the Yunnan Province of China, rather than retaining it for use in Myanmar.31 In addition, much of the land used for entertainment businesses are expropriated from locals. The Savan-Seno SEZ is built on land which was previously used for agricultural purposes.32 However, those directly impacted by this expropriation of land are neither adequately consulted nor properly compensated. Nor is there transparency – local government officials have said the compensation amount is not available until the land concessions are approved.33 Also, in Thailand’s Nakhon Panom SEZ, the land was expropriated from local villagers by the military junta in 2014, who refused to discuss compensation.34 Local civil society organizations that protested against this arbitrary expropriation of land reported that they were threatened and harrassed by the police.35