The estimated combined population for the Lower Mekong countries was 242.8 million in 2018.1 Vietnam had the largest population at 96.5 million, while Laos had the smallest at 7 million.

The Lower Mekong countries had an average annual population growth rate of 1.12 percent in the period 2010–2016. Thailand was the lowest at 0.4 percent, followed by Myanmar on 0.8 percent, Vietnam 1.1 percent, Cambodia 1.6 percent and Laos 1.7 percent.2 Thailand’s lower birth rate is attributed to better information on family planning, but also reflects an international trend toward slowed population growth associated with improved economic status.3 According to UN projections, Thailand will be the only country in the Lower Mekong to drop into negative population growth (-0.11 percent) by 2025–2030.4

The populations of the Lower Mekong countries are young. An average of one in five are 0–14 years old, with the highest proportions in Laos (34 percent) and Cambodia (31 percent), while just 17 percent are in this age group in Thailand.5

Not surprisingly, this young population is increasingly connected to the world. Internet penetration in the region is rising rapidly, particularly as smartphones with low-cost internet plans become more widely available.6

Looking at average life expectancy at birth forecasts for 2015–2020, Lower Mekong countries split into two groups: Vietnam (76.5 years) and Thailand (75 years) are significantly ahead of Cambodia (70 years), Laos (67.5) and Myanmar (66.5 years).7 The longest life expectancy in the Lower Mekong is held by Vietnamese women, who can expect to live to 81 – just one year less than women in the United States of America.

The growth in life expectancy figures in recent years also has a wide spread – in just the period 2000–2015, Cambodia saw a jump of 10 years and Laos almost 8 years, while Myanmar and Thailand gained an additional 4 years and Vietnam 2.5 years.8

Even so, Vietnam’s population is focused in two areas: the Red River Delta, including greater Hanoi, and the Mekong Delta, including greater Ho Chi Minh City. Unlike other parts of ASEAN, and with the exception of Thailand, growth is projected to continue through 2050. This will increase density and may strain resources, contribute to urban-rural migration, and create greater demand for efficient and sustainable development practices.

Current migration patterns are shaped by the pull of employment opportunities. By 2006 unskilled labor was being drawn from Cambodia, Lao PDR and Myanmar into Thailand, while Lao PDR and Cambodia saw an influx of higher skilled laborers from Vietnam.10 High skilled labor, sourced from China’s Yunnan and Guangxi provinces, was flowing into neighboring Lao PDR and Myanmar; with significant Chinese migration also reported in Cambodia. Education, vocational training and eventually increased mobility of labor associated with the ASEAN Economic Community (AEC)11—as well as economic growth differentials across the Mekong region—will shape migration patterns in the coming years.

Migration within countries is also increasingly common. To some extent, this is related to development trends, which sometimes displace people due to land transfers12 and economic stresses, as well as to increased urbanization.

As the Asia Development Bank has noted, rural-to-urban migration is common in developing countries (where an emerging city-based middle class creates consumer demand that will employ migrants).13 The Lower Mekong countries reflect this dynamic with an average urban population growth rate of 2.6 percent in 2017,14 ranging from 1.7 percent in Myanmar to 3.3 percent in Cambodia and Laos. There is a corresponding decline in the percentage of the population employed in agricultural production. 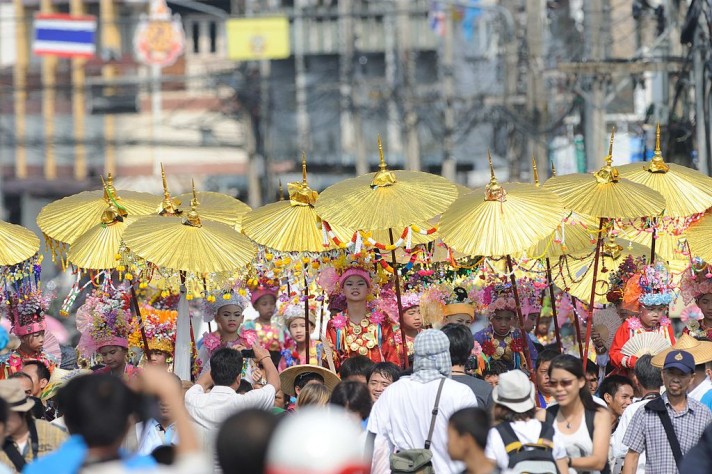 Poi Sang Long Festival being celebrated by a Shan community in Thailand. Photo by Niwat Tantayanusorn via WikiMedia Commons. Licensed under CC BY-SA 4.0.

The region’s earliest inhabitants were mostly from the Mon-Khmer language family. Later influxes of people from southern China who spoke languages from the Tai (including Thai and Lao), Indian and Burmese linguistic groups16 added to the region’s diversity and linguistic divergences.

There are as many as 150 distinct ethnic and indigenous groups across the region. Myanmar and Laos are among the most diverse countries in the world, with a high percentage of indigenous groups, collectively comprising 35–70 percent of the populations.

While the other three Lower Mekong countries are more homogenous, they also have significant populations of ethnic minorities and indigenous people. Among these are persons descended from Chinese merchants—who, especially during the colonial period, played a key role in commerce17—or from various national ethnic groups found in neighboring countries for similar reasons, or due to historic changes in boundaries. Among these are significant populations of ethnic Khmer in southern Vietnam and ethnic Vietnamese in Cambodia and Laos.

Another example of minorities are those who hold religious beliefs differing from the majority in their society, such as Islam or Christianity. Buddhism is the majority-held religious credo in four of the five countries, while in Vietnam it represented the largest faction at 45.3 percent.18 Theravada Buddhism dominates all countries except Vietnam, where Mahayana Buddhism is dominant.

With the exception of Myanmar, all Lower Mekong countries conduct a population and housing census every ten years. Before Myanmar’s 2014 census, released in  2015, the last official census was  in 1983. Laos undertook its most recent population and housing census in June 2014. Cambodia’s most recent census occurred between March 3 – 13, 2019. Other specialized surveys and censuses of population, economic and agricultural activities are also conducted by some countries.

Related to population and censuses