Despite strong economic growth in Lower Mekong economies, workers in many of the countries continue to earn comparatively low wages. As of October 2018, the minimum monthly wage in Myanmar was 144,000 kyat (about US$91 per month).1 The figure for Laos was the equivalent of US$130 per month2 and for Vietnam US$118–171, depending on location.3 The highest minimum wages are in Thailand – the equivalent of US$278–298 per month. In some cases there have been significant wage rises: the minimum wage for Cambodia’s garment workers has more than doubled in 6 years, from US$80 per month in 20134 to US$182 from 1 January 2019.5 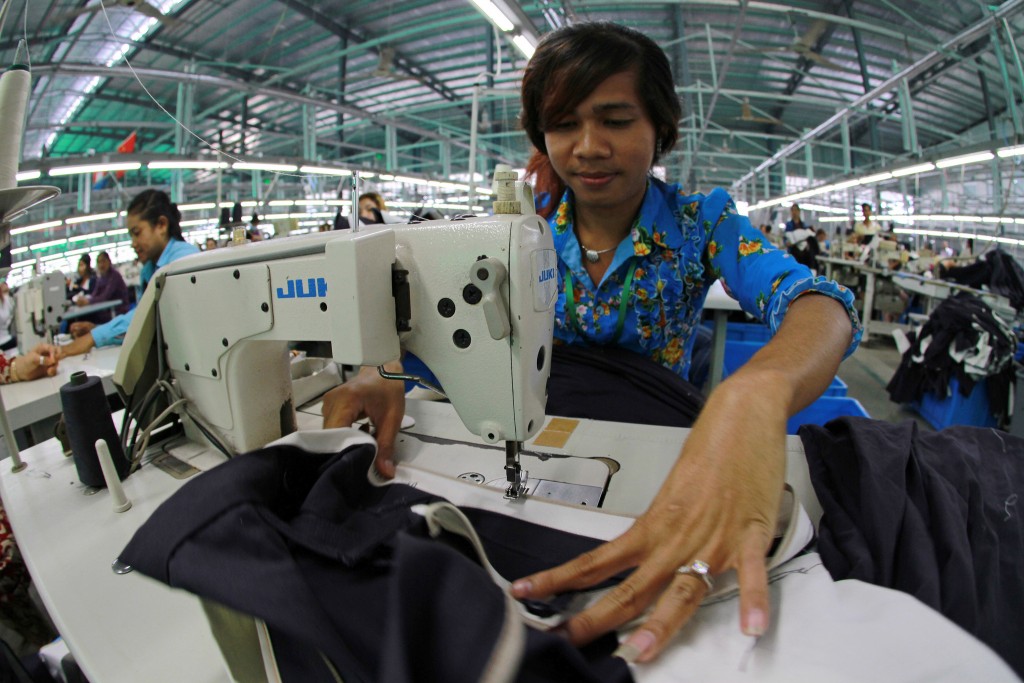 A worker sews a garter to a skirt in a garment factory outside Phnom Penh, Cambodia. Photo by World Bank, Flickr. Taken 19 February 2013. Licensed under CC BY-NC-ND 2.0.

Agriculture is still the largest employer in most Lower Mekong countries, with Thailand having the lowest percentage at 32.28% of the total labor force.6 The share of the agricultural sector has fallen by 20% in the past two decades in Vietnam and Thailand, which have seen steady advances by the service sector.7 Tourism is a growing source of employment in Cambodia: it directly provided 9.7 percent of all jobs in 2012,8 rising to 13.6 percent in 2017.9 The sector is forecast to directly account for 17.8% of total employment by 2028.10

Informal labor dominates in most countries. Around 74 percent of the workforce in Myanmar can be classified as informal,11 as can those in Cambodia and Laos. Informal labor includes work in very small family enterprises and is typically not covered by labor regulations such as the minimum wage.

The Lower Mekong countries have varying mechanisms for establishing a minimum wage, with several opting to set regional rates associated with variances in cost of living.

Cambodia’s 1997 Labor Law authorizes the Ministry of Labor and Vocational Training to set national minimum wages, and the Ministry relies on recommendations from a tripartite panel that includes government, employers associations and labor unions.12The minimum wage so far applies only to the garment and shoe sector. The ILO has noted that “…on average, the base rate of pay makes up only around 65% of Cambodian garment workers’ take-home pay, suggesting that elements of pay other than the minimum wage itself are quite significant.”13

Thailand set a national minimum wage in 2013 of 300 Thai baht (about USD$8.64) per day.17 The cabinet decision to declare a nationwide rate was a departure from the earlier practice of regional rates and provided a major windfall to poorer parts of the country. A difference between provinces was partly reintroduced on 1 January 2017.18 New minimum daily wage rates from 308–330 baht (varying from province to province) became effective from 1 April 2018.19

Vietnam, like Thailand, has used a method for determining minimum wage that applies varying rates associated with a location’s cost of living. The highest wages are in urban Hanoi and Ho Chi Minh City. In 2018, minimum monthly wages were lifted by 6.5 percent, to a range of  VND 2.76–3.98 million (US$118–171).20

Women often receive lower wages than men. An International Labour Organization report on 32 developing countries released in 2016 showed an earnings gap between young Cambodian women and men of 35%, fourth-highest of the 23 countries surveyed for that measure. Vietnam, the only other Lower Mekong country surveyed, had an overall wage gap of 15%.22 Women and men have near parity in Thailand where women earned 1.4% less for similar work.23

Historical differentials in minimum wage and gender parity, as well as general employment opportunities, contribute to the ‘pull factors’ encouraging labor migration within the region.

Thailand evolved from a country of origin of migrant laborers to a key destination for labor. It has the 14th largest number of immigrants of all countries, at 4.5 million people. Its neighbor Myanmar is 20th in the world for the number of emigrants at 3.1 m.24 Myanmar-Thailand is the 16th largest migration corridor in the world. An estimated 1.9–3 million  Myanmar migrants live and work in Thailand, a large proportion of whom are unregistered.25 Vietnam is 25th globally for emigrants, with 2.6 m, and the 11th highest remittance receiving country, getting USD$12.3 b in 2015.26

Cambodia has signed Memorandums of Understanding (MOUs) with Thailand, Malaysia and the Republic of Korea. In 2016, remittance inflows from Cambodians working outside the country were estimated at US$431 million.27 In April 2017, Cambodian Labor Minister Ith Samheng was quoted saying that more than one million Cambodians worked overseas.28 Illegal border crossings from Cambodia to Thailand are common. In 2015, 55,626 Cambodians were deported through the Poipet checkpoint.29 Deportations from Cambodia are most commonly to Vietnam, with with 2,570 Vietnamese deportees in 2016.30

Thailand is the key destination country for most Lao migrant workers, more than half of whom are women; and nearly a third of these have been employed as household laborers, with food sales and agriculture being the next most common employment activities.31Laos reportedly raised its minimum wage in part to keep workers from seeking employment in other countries (particularly Thailand), as well to establish conditions that would be more attractive to foreign investment.32 As with those from Cambodia and Myanmar, many Lao migrant workers have been undocumented.

Both Cambodia and Laos are also destinations for foreign workers, particularly from China and Vietnam. Laos has  encouraged an influx of skilled and semi-skilled workers to provide the labor necessary for its construction boom. In 2015, Cambodia began a crack-down on undocumented foreigners. Worksites were raided and scores of Vietnamese and Chinese workers were among those deported.

ASEAN has been implementing the ASEAN Economic Community (AEC) since 2007. The AEC has the goal of ASEAN economic integration through the creation of an economic space in which there will be a free flow of goods, services, foreign direct investment and skilled labor. While the AEC will facilitate the movement of skilled and professional employees across borders, it is likely to do little for the 88% of ASEAN laborers who are unskilled, many of whom have engaged in irregular migration from Myanmar, Laos and Cambodia to Thailand.33

In 2007 the ASEAN Declaration on the Protection and Promotion of the Rights of Migrant Workers was adopted, but right to 2017, limited efforts have been made to enforce the obligations in the declaration. Philippines President Rodrigo Duterte said in February 2017 that he planned to push harder for the adoption of a binding regional treaty to protect the human rights of migrant workers during his chairmanship of ASEAN.34 The Asian Forum for Human Rights and Development (Forum Asia) pointed out in 2016 that a majority of migrant workers deployed in ASEAN countries are women who are vulnerable to human trafficking and exploitation.35

Modern slavery and human trafficking are significant issues in the Lower Mekong. Modern slavery typically refers to conditions such as debt bondage and other types of forced labour.

The US State Department publishes a regular report on human trafficking. Countries are ranked into one of four tiers: Tier 1, Tier 2, Tier 2 Watchlist and Tier 3. The ranking is based on a government’s efforts to combat trafficking, not the scale of the country’s problem. Tier 1 countries have the best response to trafficking; Tier 3 countries are doing comparatively little. In the 2018 Report, Cambodia, Thailand and Vietnam are placed in Tier 2 while Laos and Myanmar (which the report refers to as Burma) are two steps lower on Tier 3, the poorest rating.39 The report details what each government is doing, and outlines recommendations for further action.