REDD+ is a voluntary program intended to help developing countries contribute to climate change mitigation efforts. In order to do this, countries undergo three phases: preparation, implementation, and measurement and evaluation.1 It is a complex process and to date, in the Mekong Region, most of the resources have been spent on the preparation phase, also known as “readiness” activities. 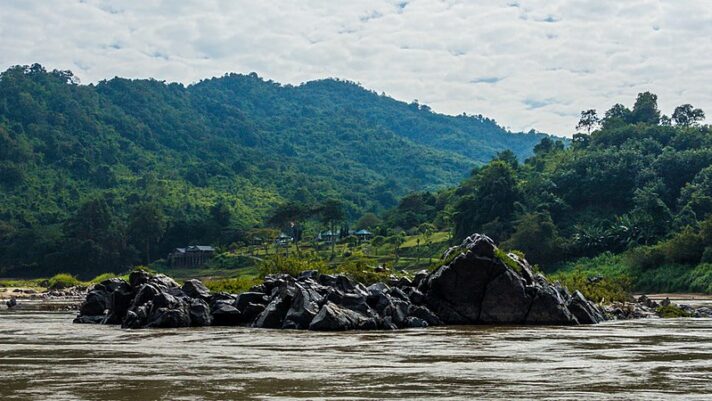 Mountainous forest as seen from the Mekong River. Photo by Klim Levine/Visions of Domino via Wikimedia. Licensed under CC BY 2.0.

REDD+ is based on the idea that deforestation increases emissions, and that deforestation continues to occur in developing countries because the financial incentives to conserve are lacking.3 Thus, REDD+ takes an estimate of the worth of a country’s forests and related ecosystems, simplifying it into an economically accountable system while also projecting potential future emissions due to projected deforestation (FRL and FREL).4 Then, after the appropriate international frameworks are agreed financing can be obtained to implement activities that potentially reduce emissions, conserve and enhance carbon stocks and help with sustainable management of forests5, as compared to the projections. Investments are typically large-scale and investors are purchasing carbon credits and offsets. Carbon credits are a certificate or permit purchased by a company allowing it to produce a certain amount of emissions.6 A carbon offset is the practice of supporting the reduction of emissions or sustainable production in one location to compensate for emissions produced in another location.7 The incentive to conserve forests arises because payment of investments are intended to be based on results.8 However, REDD+, while popular, is considered a controversial mechanism.9

REDD+ in the Mekong Region

All five countries of the Lower Mekong Region are participating in REDD+, but they are at different stages of readiness and implementation. Because REDD+ implementation is fragmented and complex, it is difficult to get a full and accurate sense of all REDD+ related projects and activities. Below are some examples of related projects by country.

In 2017 Cambodia released a National REDD+ Strategy. It is unclear what government entity has overall responsibility for REDD+, although the National Council on Sustainable Development is responsible for climate change issues.11

Laos has participated in REDD+ related activities since as early as 2004.12 However, illegal logging continues in the country, with most of it linked to infrastructure development. The responsibility for REDD+ has been tasked to two ministries, which has slowed movement on policy and other relevant issues.13

Myanmar has had REDD+ related projects since 201514, primarily in the Ayeyarwady District, although readiness activities have been ongoing since 2013.15 A National REDD+ Taskforce guides REDD+ activities, and is chaired by the Ministry of Natural Resources and Environmental Conservation.16

REDD+ was adopted in Vietnam in 2009.17 Projects in Cao Phong and Hieu Commune continue.18 Some of the earlier projects were considered to be a positive example of the government wanting to engage with Indigenous Peoples, but have been critiqued for not taking enough time to ensure full, prior and informed consent.19

Thailand has been working on REDD+ Readiness since 201620 and at the end of 2020 published its FREL and FRL.21 The overall responsibility for REDD+ is with the Ministry of Natural Resources and Environment, which has delegated that DNP is the national focal point for REDD+.22

REDD+ has been promoted by the UNFCCC, FAO, and the Forest Carbon Partnership Facility as a cost-effective way to lower carbon emissions, thereby mitigating climate change. Stopping deforestation is seen as a quick-acting solution that has additional ecological and environmental benefits.23

However, the assumptions on which the REDD+ program is built do not necessarily match the complexity of the Mekong Region reality. For instance, the main drivers of deforestation in the region include both legal and illegal logging and the conversion of forest land to agricultural land.24 Illegal logging continues to occur in protected areas, even those named as REDD+ projects, with little being done to stop these activities.25 REDD+ does not address the aspect of corruption in deforestation, nor does it address the political will necessary to effectively implement policy.26 Ironically, REDD+ systems of accounting mean that deforestation can occur, and perhaps even increase, yet it can still be counted as a benefit and positive, resulting in payments.27 In other words, REDD+ appears to be rewarding continued deforestation. 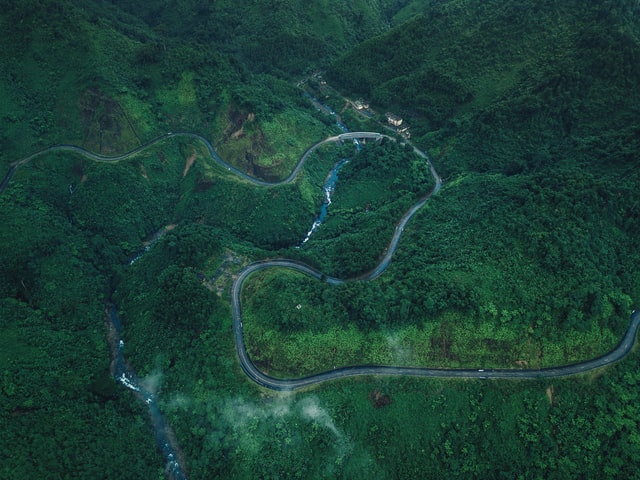 Areas of green in mountainous areas of Vietnam. Photo by Silas Baisch via Unsplash. Licensed under Unsplash License.

An additional complexity is the transboundary impacts of deforestation. Based as it is at the national or project level, there are no mechanisms to address the negative impacts of a REDD+ project in a country other than its origin. For example, a study showed that a REDD+ project in Vietnam saw a reduction in deforestation, but did so at the expense of forests abroad, including in neighbouring Laos and Cambodia.28 Another more recent study linked REDD+ projects with transboundary land grabbing.29 Funding facilities continue to sign REDD+ project agreements without addressing these issues.30 In this way, it has been argued that REDD+ actually creates legitimate pathways for actors to continue in the longstanding conflicts on land tenure security, land grabbing, and corruption in the Mekong Region.31

The design of REDD+ has been criticized for favouring large-scale development of forest resources to the exclusion of smallholders and Indigenous Peoples. In fact, it has been shown that not only are local communities undervalued in the REDD+ process, they bear the cost of the programme.32 In other cases, the work indirectly targets Indigenous Peoples by restricting their forest access33, rather than focusing on actual drivers of deforestation.34 Critics have noted that this “financialisation of nature” is unsustainable.35 At the same time, Indigenous communities in Myanmar have proposed an alternative to the REDD+ model.

A New TREES standard: will it help?

Architecture for REDD+ Transactions approved TREES 2.0 mid-2021. Referring to “The REDD+ Environmental Excellent Standard”, TREES 2.0 is considered by some to be the first credible attempt at REDD+ implementation, with US$1 Billion in funding through a public-private alliance between the US, Norway, the UK, and the private sector called Lowering Emissions by Accelerating Forest Finance (LEAF Coalition). It specifies requirements for the quantification, monitoring, reporting and verification of Greenhouse Gas (GHG) emission reductions and removals from REDD+ activities at a jurisdictional and national scale.36 At the same time, there is a concern that if governments adopt this standard, it will stop private sector projects, which have historically generated the most credits for reducing emissions.37 Regardless of a more stringent standard, TREES remains based on the measurement challenges inherent in accounting credits for deforestation. Because a baseline measurement is determined on a hypothetical, there is incentive to inflate the baseline in order to achieve a greater degree of change.38 It remains to be seen whether TREES 2.0 will be able to address some of these credibility issues.