The monitoring framework for SDG 13 – “Take urgent action to combat climate change and its impacts” – is made up of five targets and eight indicators. These will be used to monitor progress in combating climate change as part of the 2030 Agenda. The goal acknowledges that vulnerable nations including least developed countries such as Cambodia, landlocked countries and small island states, are in particular need of resources to adapt to climate-related hazards and natural disasters.1 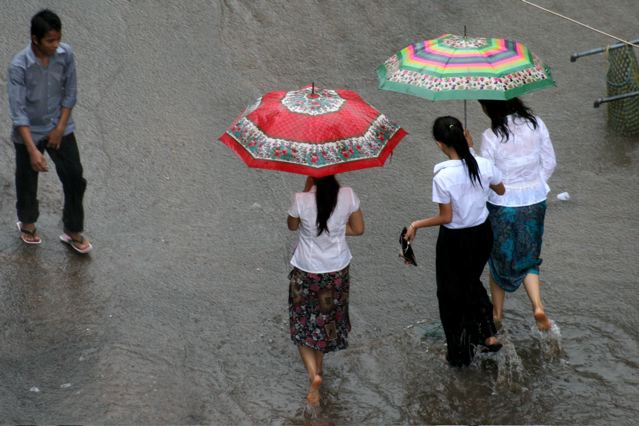 More extreme and erratic rainfall is one of the impacts of climate change; when rains are heavy in Cambodia, streets flood. Photo by Julie Rigsby, Wikimedia Commons. Licensed under CC BY 2.0.

SDG 13 recognizes that collective action is needed to limit the rise in global mean temperature to 2°C, a commitment made in the Paris Agreement. The consequences of a more than 2° increase would be severe and would have impacts beyond national borders. Avoiding these impacts will require a transformation in global energy, industry, transport, food, agriculture and forestry sectors.2

SDG 13 will be reviewed as part of the High Level Political Forum in 2019, along with SDG 4 (Education), 8 (Decent Work and Economic Growth), 10 (Reduced Inequalities) and 16 (Peace, Justice, and Strong Institutions). SDG 17 (Partnerships for the goals) is reviewed annually.4

Climate change was not included in the earlier Millennium Development Goals. However, the first three indicators for MDG target 7B (7.1 Proportion of land covered by forest, 7.2 CO2 emissions per capita and by GDP and 7.3 Consumption of ozone depleting substances) were related to technical aspects of climate change impacts. Now, other SDGs, such as SDGs 14 (Life below water) and 15 (Life on land), cover these technical areas. SDG 13 instead focuses on preparedness, integration, education and awareness-raising and is closely related to international agreements including the UNFCCC, the Paris Agreement, and the Sendai Framework for Disaster Risk Reduction 2015–2030.

SDG 13 is unique in all the SDGs in that it includes an asterisk referring to the UNFCCC as the “primary international, intergovernmental forum for negotiating the global response to climate change”.5 This is because the importance of climate change to sustainable development was recognized, but SDG negotiators did not want to take away from the ongoing negotiations of what would become the Paris Agreement under the UNFCCC.6

The UNFCCC was adopted in May 1992, and has been ratified by all members of the United Nations.7 It specifies how international treaties can be negotiated to further the goals of the UNFCCC. It was under this framework that the Paris Agreement was adopted in December 2015. It covers greenhouse gas emissions, mitigation and finance from 2020 onward. Many of the indicators of SDG 13, in deference to work being done under the UNFCCC, are closely connected to the Paris Agreement and its timelines.8 As a result, data availability for SDG 13 indicators is very poor, and the methodology of five of the eight indicators is not expected to be ready until 2020.9

SDG 13 is also closely linked with the Sendai Framework.10 The Sendai Framework is a 15-year, voluntary, non-binding agreement which aims for “the substantial reduction of disaster risk and losses in lives, livelihoods and health and in the economic, physical, social, cultural and environmental assets of persons, businesses, communities and countries”.11

Climate change has been recognized by the UN as the main accelerator of all other global trends in food security, water scarcity, and chaotic urbanization. In 2015, the Secretary General of the UN stated: “Let us always remember that climate change and sustainable development are two sides of the same coin”.12 The development agenda is closely interlinked with the climate agenda: it has been estimated that as many as 154 of the 169 SDG targets are aligned with climate actions.13 The message is clear: seeing all SDGs as parts of an interlinked goal is absolutely necessary for successful implementation of SDG 13. 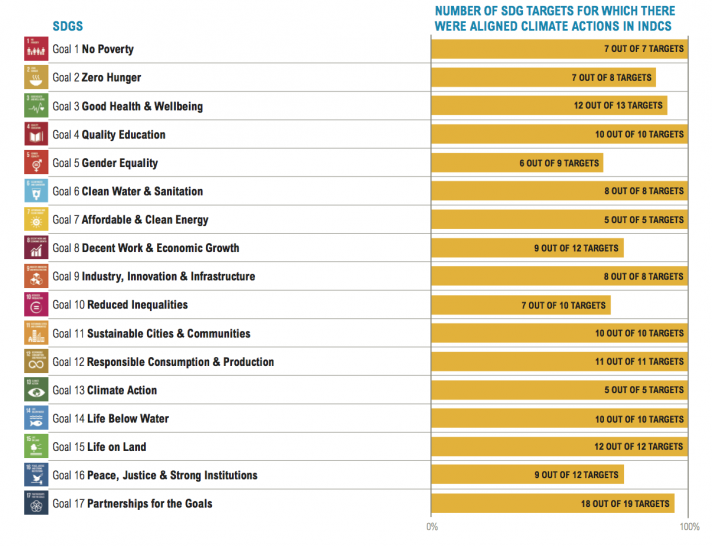 Not all countries have the same capacity to cope with the impacts of climate change. Developed country financial assistance to developing countries is enshrined in the UNFCCC, and quantified in the Paris Agreement at US$100 billion per year.14 SDG target 13.A is based directly on these commitments. (13.A states: “Implement the commitment undertaken by developed-country parties…to a goal of mobilizing jointly $100 billion annually by 2020…to address the needs of developing countries in the context of meaningful mitigation actions and transparency on implementation and fully operationalize the Green Climate Fund through its capitalization as soon as possible.”)

The Green Climate Fund and the Global Environment Facility are operating entities of the financing mechanism under the UNFCCC. The Green Climate Fund, named in SDG 13.A, aims to support developing countries to limit greenhouse gas emissions and adapt to climate change.15 However, despite its direct connection with SDG 13, neither the Fund’s investment criteria nor its policy documents make any direct mention to the role it plays in the SDGs. In its last review of funding applications, only six (including one Cambodian project) of 23 applications specifically mentioned the SDGs. It has been suggested that additional work be made to integrate the SDGs with the Green Climate Fund to strengthen its role with the SDGs.16

Other funds include the Special Climate Change Fund, the Adaptation Fund, and the Least Developed Countries Fund. Other financing solutions include carbon credit mechanisms, disaster risk insurance, and results-based financing.17 Nationally Appropriate Mitigation Actions (NAMAs), which are voluntary actions to reduce greenhouse gas emissions that fit in a country’s sustainable development priorities, are being promoted as a promising alternative climate financing solution.18 ESCAP (the UN’s Economic and Social Commission for Asia and the Pacific) has been supporting a number of countries, including Cambodia and Vietnam, in developing NAMAs.19 ESCAP  also developed a regional action agenda to finance climate action in Asia and the Pacific in 2017, although it is not directly connected to SDG 13.20 A regional network of climate finance practitioners was also established to exchange knowledge, good practices and lessons learned.21 Given the timeframe of the Paris Agreement, it would be expected that financing mechanisms that are more integrated with SDG 13 be ready for 2020.

Because of its focus on developing countries, the Green Climate Fund also supports SDG 13.B. The Fund has policies on gender and social inclusion as well as indigenous peoples, although the connection with the SDGs is not yet explicit.22 It remains to be seen what specialized support will be available for other vulnerable and marginalized communities.

Climate change impacts, such as rising sea levels and an increase in extreme weather events, are expected to hit Southeast Asia particularly hard.23 This will impact not only the region’s biodiversity, but also the large number of people dependent on fisheries and agriculture for their livelihoods.24 Lower Mekong countries have been addressing this. For example, all the LMCs are participants in programs such as UN-REDD+, and all have incorporated climate change into law and policy, which corresponds with indicator 13.2.1. Thailand25 and Lao PDR26 each have policies on disaster risk reduction, while Vietnam has a law on the same (indicator 13.1.1).27 Cambodia and Myanmar each have both a policy and a law28,29,30,31 and each have policies on disaster risk reduction. 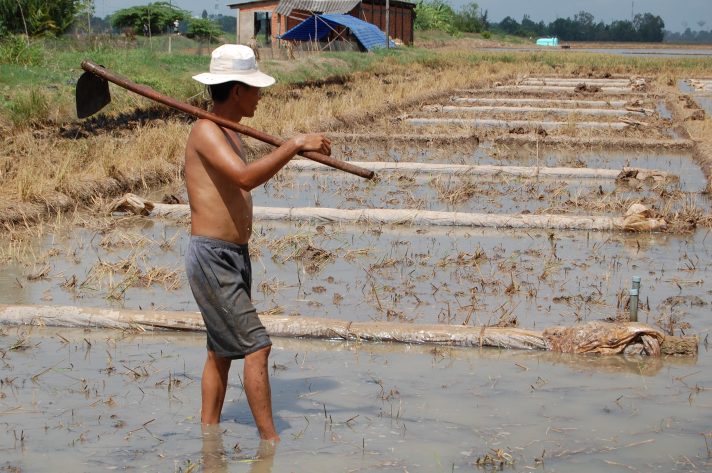 Climate change will affect land use in the Lower Mekong region, especially for those dependent on agriculture. Some climate change adaptation projects, like this one in Vietnam, look at adapting rice-growing techniques to be more climate-proof. Photo by V. Meadu, via Flickr. Licensed under CC BY-NC-SA 2.0.

ASEAN (the Association of Southeast Asian Nations) has recognized the importance of cooperation on climate issues affecting Southeast Asia, such as deforestation and carbon dioxide emissions.32 It has formed agreements, provided guidelines, undertaken initiatives and established institutional mechanisms to address vulnerability to impacts of climate change. For example, SDG 13 is connected with three of the five policy priorities of ASEAN: sustainable management of natural resources, sustainable consumption and production, and resilience.33 In addition, the concepts of resilience, adaptation and transformation have been included in the ASEAN Community Vision 2025 to guide policy development.34

In 2015, ASEAN signed a declaration (Declaration on Institutionalizing the Resilience of ASEAN and Its Communities and Peoples to Disasters and Climate Change) committing to economic, social, cultural, physical and environmental measures that will reduce vulnerability to disaster and climate-related risks.35 A major challenge to addressing climate issues has to do with capacity weaknesses, indicating that a focus on capacity building is imperative for the achievement of SDGs.36

Regional cooperation has also been strong at the Asia-Pacific level. A regional climate change agenda was developed at the end of 2017, though this is primarily connected with the Paris Agreement rather than the SDGs.37 It is likely that after the Paris Agreement parties take stock of the work they have done so far to implement the agreement in 2018, and further methodological work on the SDG indicators has been completed, that a stronger sense of how regions and sub-regions can support SDG 13 will be possible.

General climate change data is available, including through the ASEAN Climate Change Action Database (ACCAD). This is an ASEAN-specific database, developed by the Southeast Asia Network of Climate Change Offices, with the support of UNEP. It also aggregates information for the Greater Mekong Subregion, which includes the LMCs and China.

Data availability for the SDG 13 indicators is very poor, however. Five of the eight SDG 13 indicators are Tier III38 (no internationally established methodology or standards are yet available). Only 13.1.2 (closely connected with the Sendai Framework for Disaster Risk Reduction39) is considered a Tier I indicator, and the other two (13.1.1 and 13.1.3) are considered Tier II.40 Thus, globally, only Indicator 13.1.2 has any data at all.

Work on SDG 13.2.1 awaits methodological work being done on National Determined Contributions for the Paris Agreement. Guidance for developing this indicator is expected after final negotiations to operationalize the Paris Agreement in December 2018. Methodological work by the IPCC (Intergovernmental Panel on Climate Change) is due to be completed by 2020.42 A similar timeframe is expected for 13.3.143, 13.3.244, 13.A.145, and 13.B.146 as they are also all connected with the Paris Agreement. A gender action plan is being developed under the Lima work program on gender that may impact Target 13.b.47