The Lower Mekong Region is one of the most vulnerable areas to climate change, which has the potential to jeopardize human health. The World Health Organization considers water-borne diseases, undernutrition and mosquito-borne diseases priority health concerns for the region, and climate change can transform those diseases into health emergencies.1 Safe water and food sources are already becoming more scarce, and environmental changes would create epidemics of mosquito-borne diseases.2 If climate conditions remain unchanged, instances of disease epidemics are estimated to become alarmingly high and the pressure on the health sector will most likely exceed the capacity to respond. Poverty, social inequalities and weak health systems further slow this capacity to respond and leave behind the most vulnerable populations.3

Even if emission levels rapidly decrease immediately, climate change impacts on disease patterns will continue to be felt for several decades.4 However, at present, it is difficult to predict with certainty what exactly these impacts will be on human health in the LMCs. While further research would help to quantify these impacts, countries should not wait to take the potential for impacts seriously, since this may leave countries underprepared.5 In fact, the LMCs are currently not prepared for these challenges.6 Water-borne diseases, undernutrition and dengue fever have the potential to disproportionately impact vulnerable populations like the poor, children, the elderly and women.7 To prevent the worst health outcomes – epidemics of health issues causing death – countries urgently need to implement adaptation and mitigation strategies.8 However, the LMCs remain very focussed on economic growth, whilst environmental health and social inequalities receive less attention.9 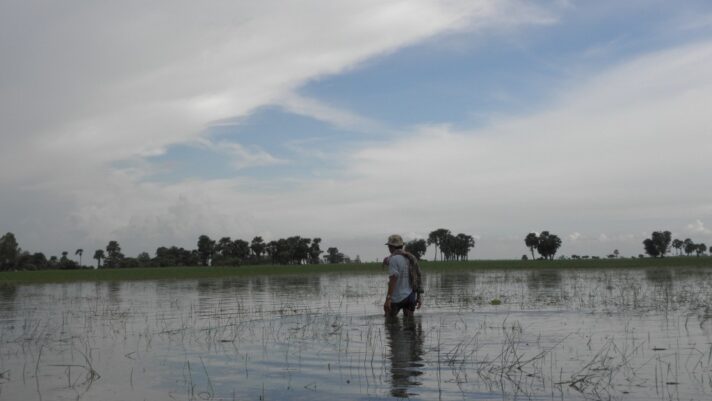 Floods inundate a rice field, which causes concerns for farmers who do not know how much of their crops they can salvage. Extreme weather patterns like these are also prime conditions for mosquito breeding. Photo by Cecile Pichon via Flickr. Licensed under CC BY-SA 2.0.

Water-borne diseases are among the most concerning health threats for the LMCs, since they cause extremely severe symptoms of diarrhoea, which in turn create one of the largest burdens of disease, or the impact of a disease as measured by financial cost, deaths, lost productivity, and other indicators.10 People living in poverty, without an understanding of healthy practices, live in unhygienic conditions and rely on contaminated water sources for drinking and washing, which puts them more at risk.11 Meanwhile, even the common health practice of using bottled water is becoming insufficient. Studies in Vietnam found that even bottled water was contaminated with pathogens, which increases the risk for diarrheal diseases. 12

The LMCs have reported high numbers of deaths due to contaminated water sources. Children make up a large proportion of those deaths, since they are particularly at risk of more serious symptoms of disease. 13 In 2016, 281 people died from diarrhoea through contaminated water sources in Lao PDR, with 213 of those deaths being children under 5. Myanmar shows the highest total number among all LMCs, with 3471 deaths in 2016. About one third of those were children under 5.14 These numbers are not expected to decrease significantly in the near future, since climate change will substantially impact access to safe water sources and thus increase the prevalence of water-borne diseases. 15 Climate hazards, such as heavy rainfalls and floods, carry pathogens and contaminate safe water sources. Droughts lead to lower water flow and levels, which increases the growth pace of pathogens. Competition for freshwater sources will become more common and more people will have to rely on potentially contaminated water sources to fulfil daily needs.16

Available data shows evidence that the impact of climate change on water-borne diseases in the LMCs will be substantial, despite gaps in the data.17 Not all the LMCs have sub-national level data on access to safe water sources, which is better than national level data since it shows sub-national variations to help detect variability in availability of clean water, thus allowing sources of water-borne diseases to be pinpointed. For the countries with this data, large disparities are present. In some Cambodian provinces, for example, less than 10% of the population have access to safe water sources.18 One case study from Lao PDR reported that over 40% of a district’s population was regularly drinking from untreated water sources. Climate variations over the previous years have increased water salinity, which increased people’s dependence on those less safe sources.19

Water quality may also be overestimated. Most studies assess water quality from large water channels like the Mekong River. Pathogens are diluted in larger bodies of water, which reduces their concentration.20 However, many households rely on small water sources for drinking, which are often much more contaminated with pollutants. Data using those sources would give a different picture of water quality in a country.21

In addition, while studies show an association between decreased water availability and increased diarrheal diseases, quantifying the true impact remains poorly understood.22 Yet, available data does show cause for concern in the Mekong Region.

Dengue fever is a vector-borne disease transmitted through mosquitoes, which has the potential to become a public health emergency.24 There is limited understanding of the disease, in part due to poor reporting,25 and this potentially life-threatening disease currently has no cure. Due to their geographical area and climate, the LMCs are already prone to epidemic dengue cycles.26 However, climate change can exacerbate the situation, since prolonged rains and increased temperatures provide ideal breeding conditions for mosquitoes.27 Children are at highest risk of developing serious courses of the disease.

Unusually high numbers of dengue fever cases were reported in four of the five Lower Mekong Countries in 2019 (Cambodia, Lao PDR, Thailand and Vietnam).28 Recent reports show an eight-fold increase in dengue cases in Cambodia and a 6-fold increase in Lao PDR, compared to the same time period in 2018.29 Dengue is spreading at a very high pace and the number of deaths due to dengue fever is increasing.30  Vietnam reported 50 deaths and Lao PDR 59 deaths between January and October 2019.31 Dengue was also unusually prevalent in Myanmar, and according to a recent news article, 123 people died of the disease between January and November 2019. 32 These numbers can partly be explained by increased national reporting33, but such a sharp rise is actually very uncommon.34 Other reasons for the sharp rise in Dengue include changes in weather patterns, increased travel, and increased urbanization.35

Reporting of dengue cases has historically been insufficient. Underreporting or delayed reporting of cases is typical and non-hospitalized cases mostly go unrecorded. This also means that there is limited understanding of the disease in populations with limited access to hospitals, such as those living in rural areas and those unable to pay for hospital services. These gaps hinder the detection of outbreaks and thus an early response.36

Additional capacity concerns limit the usefulness of data on Dengue in the Mekong Region. Data availability and reporting varies a lot between the countries, making collaborations and comparisons difficult. Regions in come countries, like Lao PDR, still conduct paper-based reporting, which is more prone to errors. Furthermore, the media commonly publishes numbers on disease outbreaks before official government reports, raising concerns regarding data validity and quality.37

At present, Dengue fever is not receiving sufficient attention from decision-makers. Considering that Dengue epidemics can occur unexpectedly, such outbreaks might overwhelm the LMCs’ capacity to adequately respond.38 In terms of the global development agenda, Dengue fever is included, although not explicitly, in SDG 3.3, which aims to end the epidemics of communicable diseases. Many other SDGs are interlinked with the prevention of Dengue. In particular, SDG 13: Climate action, is extremely relevant, since it has a great impact on transmission patterns. Furthermore, SDG 4: Quality education, will increase knowledge and thus the impact of prevention.39

Undernutrition is a critical state of poor health and comes from lacking access to food sources, insufficient nutrient intake or infectious diseases. Undernutrition affects people at all ages, but it is particularly severe for children, since it greatly impacts child development.40. Stunting, wasting and underweight are the most prevalent forms of undernutrition in the LMCs. Stunting is described as low height for age, whilst wasting is described as low weight for height.41 Stunting indicates that children have not reached their full genetic physical and cognitive potential due to chronic undernutrition. Stunted children are expected to suffer from impaired brain development, which will negatively impact their learning skills and thus their labor opportunities.42. Wasting usually occurs when children lose weight very fast and it can be life-threatening with severe impacts on cognitive and physical development.43 The consequences of these impacts are irreversible.

Prevalence of stunting in children under 5 is extremely high in Lao PDR, with 43.8% of all children being stunted in 2011. Cambodia recorded 32.4% in 2014, similar to Myanmar, with almost 30% prevalence in 2016.44 Stunting in children is connected to maternal health; for instance, if a mother has poor nutrition her child is more likely to be stunted. Women are more likely to have limited food consumption, in part due to socioeconomic circumstances as well as cultural beliefs. A study from Cambodia also found that lack of knowledge was a significant contributor to poor diets.45

Climate change can significantly contribute to undernutrition by destroying food security. Food security means that people have constant physical, social and economic access to food sources, which meet the required amount and quality to live a healthy life.48 The food sector is one of the most vulnerable sectors to climate change.49 Drought, heavy rainfalls, extreme weather events and high CO2 levels limit availability and access to food sources, reduce the nutritional quality of food, and raise food prices.50 If climate hazards become more prevalent, the number of undernourished people will rapidly increase as well. Poor people living in rural areas, often dependent on agricultural work, will suffer most.51 Women are disproportionately impacted and have a 10% higher chance of being food insecure in comparison to men.52 To cope with food shortage, women are also likely to reduce their personal food intake or prepare lower-quality foods for their families.53

Undernutrition has been a public health concern for many years and was already part of the MDG agenda. The additional threat of the unpredictability of climate change on this concern and on food security has been acknowledged by ASEAN.54  Part of the ASEAN regional response has been to establish the ASEAN Post-2015 Health Development Agenda.55 Furthermore, all countries, including the LMCs, have national policies in place covering food security and child undernutrition.56 On the global agenda, SDG 2: Zero hunger targets these issues. Progress in achieving SDG2 is measured by the indicators of stunting and wasting. While a good start, these numbers may not give a full understanding of the nutritional situation in a country. Prevalence numbers do not reflect undernourishment, which also means that inequality in undernutrition is not reflected in the data. For instance, some countries may show low levels of malnutrition, but the severity might be extremely high. Since the SDGs are aiming to support the ones who are furthest behind, data reflecting these gaps are needed.57