The Lower Mekong region is home to some of the world’s most dynamic cities. Bangkok, Ho Chi Minh City, Hanoi, and Yangon all have populations in excess of 5 million and are still growing. Phnom Penh and Vientiane are smaller but their growth has been dramatic. Phnom Penh’s population doubled between 1998 and 2017, to over 2 million people in the metropolitan area.1 As well as being commercial and often governance centers, these major cities are tourist destinations and home to places of historic and cultural significance.

The two biggest cities in the Lower Mekong countries, Bangkok and Ho Chi Minh City, are expected to grow from 9 and 7.1 million people respectively in 2014 to 11.5 and 10.2 million by 2030.2 Although the capital cities of Mekong nations are also usually their most populated and economically active, Vietnam, where Hanoi is the capital, and Myanmar, where Naypyidaw is the capital but Yangon is the largest city, are exceptions.

Urbanization is projected to increase considerably, driven by the increasing market orientation of economies, improved transport, and the regional policy of open borders. Much of the urbanization is found along water bodies, which make them natural centers for transport, as well as serving as water sources. Almost all of the region’s major cities are situated on rivers.

This demographic shift from the countryside to cities will not only concentrate populations but will increase demands on urban sanitation, water, food, transport and energy distribution systems. This raises serious questions for urban planners and administrators about how to cope with the ever-increasing needs of residents. Despite decentralization of public administration in Mekong nations and increased decision-making at sub-national levels, current urban governance and planning is considered generally weak across the region, with limited technical capacity within local government agencies.

Most of the region’s urban inhabitants work as day laborers or small-scale entrepreneurs, making their incomes relatively low and unreliable. Although official rates of urban poverty are lower than rural ones, income inequality is high in many cities, where multiple levels of society are juxtaposed. The constantly-changing urban landscape means that some neighborhoods are being gentrified, as wealthier residents and businesses catering to them seek new areas to settle, often out-pricing and displacing long-time inhabitants. While this trend is not unique to the Mekong, it has sped-up due to the pace of economic growth.

The state of urban infrastructure varies across the Lower Mekong. Urban populations in Thailand, Vietnam and Cambodia have near universal access to safe water, while the figure is 93 percent in Myanmar and 86 percent in Laos.4

In 2015, 90 percent of Thailand’s urban population had access to improved sanitation facilities – just a small improvement on the year 2000 figure of 89 percent.5 The other Lower Mekong states started from much lower bases and have seen significant improvements. Myanmar improved its access to sanitation from 78 percent of the urban population in 2000 to 84 percent in 2015. The change in Cambodia was extraordinary, literally doubling the access to improved sanitation, from 43 percent of urban dwellers in 2000 to 88 percent in 2015.6

Traffic congestion is a persistent problem in the region’s large cities. A 2016 study found that out of 1,064 cities, Bangkok had the highest number of peak hours spent in congestion.7 Another study found that Bangkok drivers spent 36 percent of their travel time idling – the highest percentage of all cities studied.8 Traffic jams have significant negative impacts on urban areas, including traffic accidents that result in deaths and injuries, air pollution, and loss of productivity. Parking is also a problem in many cities where an increase in automobiles has not included a commensurate increase in parking. 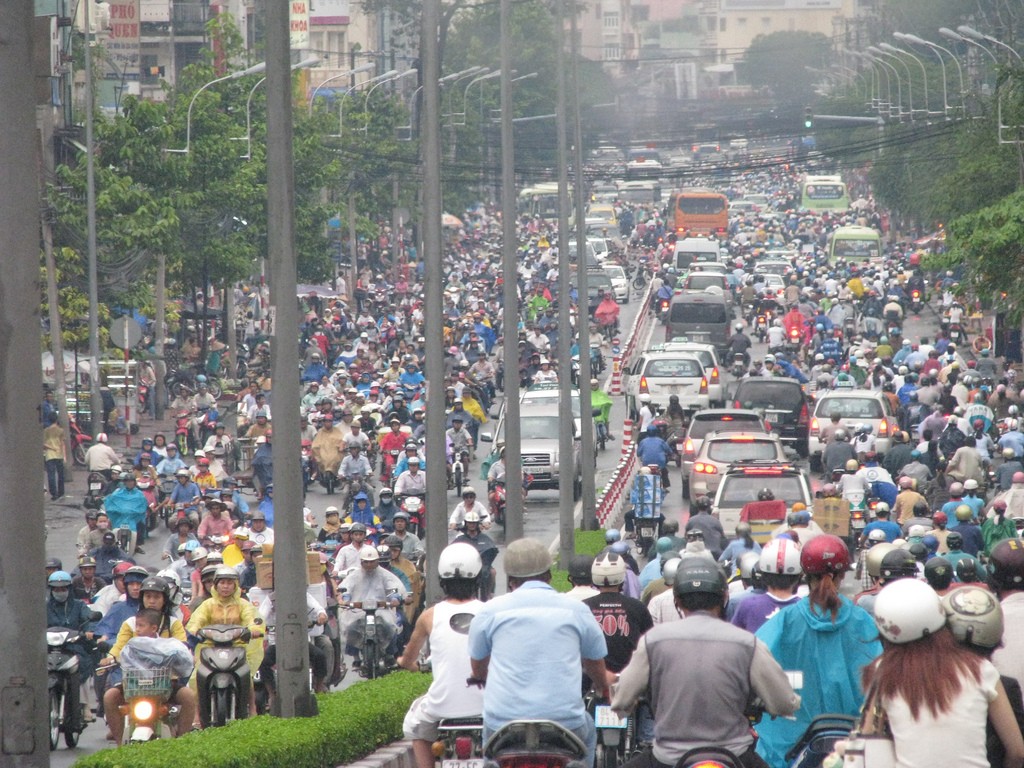 While many major cities have bus systems, only Bangkok and Yangon’s public transport includes rail, although Yangon’s system, which dates from the colonial era, is ageing. Both Hanoi and Ho Chi Minh City are constructing light rail lines.

Around the region, rapid urbanization without adequate urban planning has resulted in the proliferation of slums. These are defined as households lacking one or more of the key features of adequate living space, adequate durability, access to improved water and access to improved sanitation. In 2014, slum-dwellers accounted for 55 percent of the urban population in Cambodia, 41 percent in Myanmar, 31 percent in Laos , 27 percent in Vietnam and 25 percent in Thailand.9

SDG 11, Make cities inclusive, safe, resilient and sustainable, has as a specific goal: “By 2030, ensure access for all to adequate, safe and affordable housing and basic services and upgrade slums.”

In the Lower Mekong countries several ministries at the national, provincial and municipal level are involved in managing urban development, however it is still led centrally by the following line-ministries.

Cambodia: Ministry of Land Management, Urban Planning and Construction (MLMUPC) guided by the National Strategic Development Plan (NSDP) 2014-2018. The Ministry is in the process of completing a Draft National Urban Development Strategy Framework.

Laos: The Department of Housing and Urban Planning (DHUP) of the Ministry of Public Works and Transport (MPWT) guided by the National Socio-economic Development Plan (NSEDP) 2011-2015 and the National Urban Sector Strategy.

Thailand: Department of Public Works and Town & Country Planning (DPT) in the Ministry of Interior (MOI)

Related to urban administration and development