The management of water resources is becoming a critical issue in the region as competition for water increases and climate change takes hold. At the same time, the rapid conversion of forests to other uses has diminished the environmental capacity to regulate water at the natural hydrological level. To date, the lack of a strong governance and policy framework at the national or regional levels has further exacerbated problems. 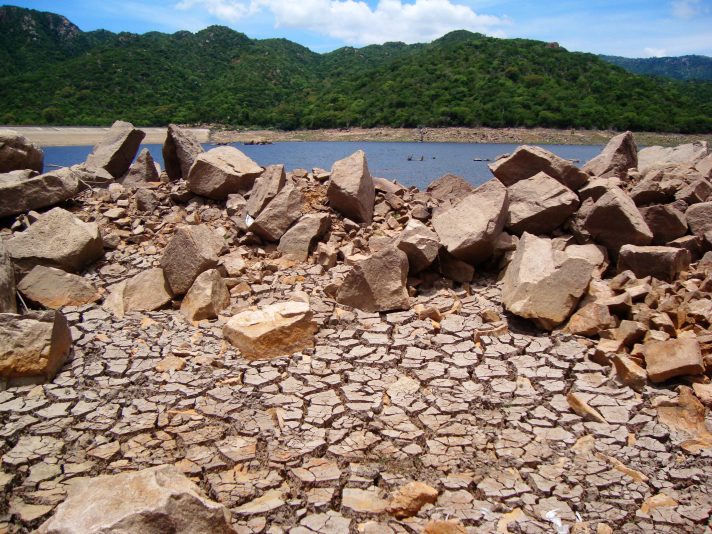 Climate change, and the extreme weather that is associated with it, represents one of the greatest challenges to the Mekong region’s management of water. Assumptions about hydrological cycles and water supply, based on the knowledge of generations, no longer hold true. Water stress is expected to  increase significantly as rising temperatures affect both the timing and quantity of water available for use, as well as biodiversity, with impacts to the region’s food supply. Some climate change models project a net increase in rainfall of about 5 percent across the Greater Mekong Basin,1 with little change and even decreases in rainfall projected for Cambodia and the Vietnamese Delta.2 Others project little change in net rainfall.

Overall, climate change modeling projects shorter wet seasons, longer and drier dry seasons, increases in temperature which will increase evaporation, and an increase in extreme weather events, including typhoons and periodic flooding. These changes are expected to have a strong impact on the hydrology of the region.

In late 2015 through 2016, the Lower Mekong region, particularly southern and central Vietnam, southern Laos, Cambodia, Thailand and Myanmar, suffered their worst drought in 90 years. The drought, along with record breaking high temperatures, was due in part to a  super ‘El Nino’, a naturally occurring phenomenon, during which the normal Pacific trade winds break down, and disrupt normal weather patterns. In the Mekong region, this  phenomenon causes temperatures to rise and delays the annual rains. However, in the record-breaking year, scientists reported that the El Nino only accounted for 8-10 percent in the temperature rise, citing climate change as a greater factor for that.3

The VIIRS fire dataset (view source document) show’s all fires detected during the time period 3 March till 27th April 2016. A significantly hot month with record temperatures for the region. From March to June this year, water levels in the Tonle Sap reached record low levels due to the extreme heat and drought. Zooming into the dataset around the Tonle sap indicates an extremely intense fire that destroyed a significant amount of flooded forest. Source: https://www.iucn.org/news/flooded-forest-fires-major-threat-tonle-sap. Map created by ODI September 2016.

The drought resulted in severe water shortages and competition for water across the region and contributed to significant reductions in rice yields. Reduced water flows also led to salt water intrusion in the coastal provinces.

The Vegetation Health Index estimates vegetation health (condition) based on moisture conditions (VCI), thermal conditions (TCI) and their combination (VHI). Vegetation health is often used to estimate crop condition and anticipated yield. If the indices are lower than 40 indicating different level of vegetation stress, losses of crop and pasture production might be expected; if the indices are higher than 60 (favorable condition) plentiful production might be expected. VH is very useful for an advanced prediction of crop losses. View the source data

In southern Vietnam, the problem is not so much a lack of water but the wrong kind of water. When the Mekong’s flow is reduced, due in part to climate change, there is inadequate fresh water filling the delta and seawater then intrudes into both surface and ground water.  In 2016, a lack of adequate freshwater making it to the Lower Mekong Delta resulted in saltwater incursion from as much as 45-100 km inland in Vietnam’s coastal provinces.13 An estimated 92,000 – 150,000 hectares of rice were lost or damaged by saltwater intrusion.14 To recover such  damaged land for rice farming is  costly. While shrimp farm is more suitable for brackish water, motivating conversion from rice to shrimp farms in some areas, high levels of salinity also affected shrimp production.15 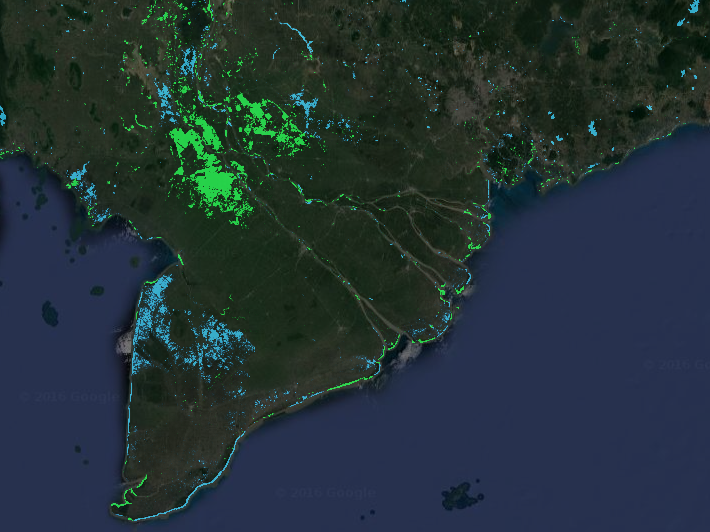 At the opposite end of the spectrum, the region will be increasingly  vulnerable to seasonal flooding in extremes. While a normal cycle of seasonal flooding is necessary and manageable, typhoons and unusually heavy monsoonal rains may then result in extraordinary floods. Since 2008, there have been at least three major typhoons (Nargis, Ketsana and Komen) causing massive flooding and costly storm damage in various parts of the region. In 2011, Typhoon Ketsana brought on torrential rains in Vietnam, Cambodia, Laos and Thailand. In 2015, northern Vietnam experienced a week-long record rainfall that also led to floods and landslides that  were particularly damaging in Quang Ninh province (see Disasters and emergency response for more on these). Climate change models project that similar incidences of extreme weather will increase in both frequency and intensity.

Because of the dynamics we describe on the ground water page, increased rainfall will not necessarily adequately recharge ground water. With the loss of the regulating services of forests, massive run-off from heavy rains will increase the volume of floods, while also contributing to decline in soil quality and  the silting up of rivers.

Some landscapes will be more vulnerable to flooding and/or drought than others.

Environmental stresses related to global climate change are not the only cause for concern. Ever-increasing demand and competition for water resources are both caused and affected by localized environmental changes that are largely driven by economic development. Some of these result from population growth and the need to provide water and food to the region’s citizens. By 2020, the combination of population growth and rising affluence is expected to have increased demand for water by about 60 percent, in comparison to 1995. At the same time, by 2040, water availability per capita may be half of that in 1995, even without considering climate change effects.16

Other increasing demands on water relate to the expansion of tourism, agro-industry, manufacturing, and extractive industries, all of which require water. The demand for irrigation water is expected to double between 1995 and 2040. Water is also in demand to fuel hydropower dams and to provide for transport. As a critical resource under considerable pressure, increasingly governments will be forced to prioritize how water is used.

One short-term solution has been to access ground water, particularly for domestic consumption but also increasingly for commercial and industrial use. This is not a durable solution. Ground water is being over-exploited, as is surface water, during the dry season. Wells in many areas of the region ran dry in the 2016 drought.

Four areas of risk measured are: “Recent Forest Loss”, “Historical Forest Loss”, “Erosion Risk”, and “Fire Risk”. Risk scores range from 1-5, where a score of 4 and above indicates watershed health is more likely to suffer as a result of exposure to that stressor. Source: Global Forest Watch. The GFW Aquaduct map project has more detail on how the risk scores are calculated, as well as the source data.

At the regional level, the transborder nature of the riverscapes, watersheds and aquifers also creates competition between countries. China controls the upper reaches of the Mekong, Salween, and Red rivers. Dams in the Upper Mekong Basin in China have impacts on water and sediment flows, in regard to both timing and amount,17 as have dams in Vietnam’s central highlands. Laos has proceeded with plans to construct two dams (the Xayabouri and the Don Sahong) on the mainstream Mekong, even though concerns have been raised by Cambodia and Vietnam downstream. The impacts that such dams are projected to have on the regions’ hydrology are so great that a number of scientists, environmental organizations, civil society groups and indigenous people, have raised alarm bells about them. Some dam projects, such as the Myitsone on the Salween in Myanmar, have been suspended, while others have been taken off the table completely or have been cancelled. An example of this is the Dong Nai 6 and 6a dams which the Vietnamese government cancelled for environmental reasons.

In 2016, Thailand forged ahead with plans to divert water from Mekong tributaries into their own water-starved development, depriving downstream countries of needed water.18

All of these issues suggest the need for a much stronger focus on shared and improved water governance at both regional and national levels as well as a need to manage the ecosystems services on which water relies in more sustainable ways.