Because of the transborder nature of water ecosystems, a regional approach to water governance and the management of water resources is fundamental to both sustainable development and the assurance of water rights.

Hydrobasins in the Lower Mekong. View the full map in Map Explorer.

This need was recognized as early as 1957 with the initiation of The Mekong Committee (also named the Committee for Coordination of Investigations on the Lower Mekong Basin) comprised of Cambodia, Thailand, Laos, and Vietnam and the endorsed by the UN. The subsequent period of war and political instability in much of the region disrupted development along the Mekong. The Khmer Rouge’s withdrawal of Cambodia from The Mekong Committee in 1977 led to the institution of the Interim Mekong Committee, participated by Laos, Thailand, and Vietnam with little development undertaken during this time.

The Agreement on Cooperation for Sustainable Development of the Mekong River Basin, signed by all four countries in 1995, marked the start of a new era of development, recognizing the transborder nature of water resources. The agreement also instituted the Mekong River Commission, which has been the dominant body for member states to:

However, agreements are non-binding and the MRC has only advisory and no governance authority. 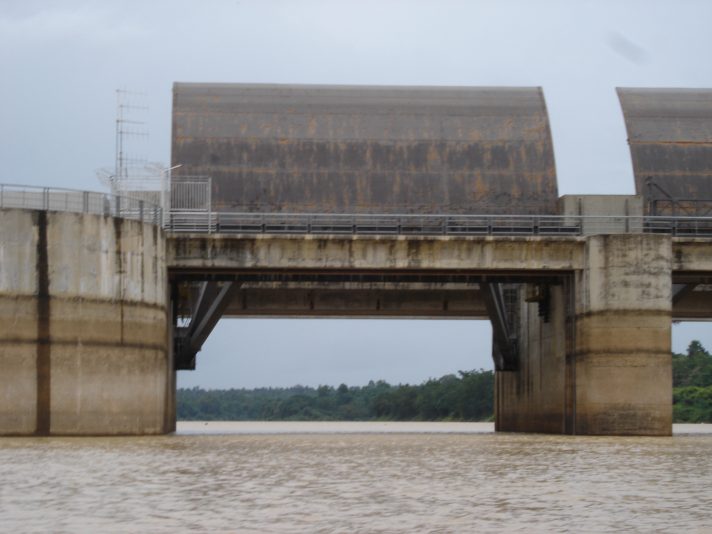 Pak Mun Dam, located 5.5 km west of the confluence of the Mun and Mekong Rivers in Ubon Ratchathani Province, Thailand. Photo by Water, Food and Livelihoods in River Basins via Flickr. Licensed under CC-BY-2.0.

In recent years, the varying priorities of the member states – which do not include the other two Mekong countries, China and Myanmar – have become increasingly apparent.  For instance, Laos has moved ahead on the development of mainstream Mekong Dams, even with concerns raised by downstream countries. In the meantime, Thai activists in particular have blamed China’s development of upstream dams for impacts to their fisheries and for floods believed to be associated with China’s release of water from dam reservoirs. In 2016, Thailand moved forward on plans to divert large quantities of water from Mekong tributaries.  The MRC proved incapable of mediating solutions that would be acceptable to all countries.

In 2016, the institution of the ASEAN Economic Community (AEC) and the initiation of the China-led Asian Infrastructure Investment Bank – both with interests in the development of the Lower Mekong Region –   signaled the beginning of a shift in how transborder development issues may be managed in the future.  Both call for an intensification and acceleration of development activities in the Mekong region, posing significant challenges for sustainable water governance and equitable access to water. To learn more about these issues, please see trends and challenges of water management.