Rivers and lakes are two types of surface water. In Cambodia, Laos, Myanmar, Thailand and Vietnam (or the Lower Mekong Countries), the majority of surface water is organized into large river systems that network into streams, lakes, ponds and wetlands, and flow into deltas. It is a freshwater resource.

The Mekong River is discussed separately, here. The other river systems in the region are described briefly below.

Rivers are the key source of freshwater for all people living in the region, regardless of whether they are located close or far in terms of distance to the main riverway. The 60 million people living directly along the Mekong are dependent on it for their foods and livelihoods, More than 240 million people living in the Lower Mekong Countries benefit both directly and indirectly from the resources that the Mekong and other rivers provide, including rice, fish, water for domestic use, and water for industrial use. Rivers help the economy, provide food and water security, and perform important ecological functions.

However, the region’s rivers are currently under threat, due to a variety of impacts, including climate change, agribusiness, and hydropower development.

Like the Mekong, the Salween and Red rivers originate in China, while the Ayerwaddy and the Chaophraya originate in the mountains of Myanmar and Thailand respectively. The Salween has the second largest river basin in the region, after the Mekong.

Rivers are critical not just because of their water but because of the sediment they carry.  Sediment is critical for replenishing flood plains and deltas and re-enriching soils. As the hydrology of the landscape changes so do the sediment flows. If too much sediment enters a river as a consequence of deforestation or environmental degradation, its weight may cause it to be deposited too early, silting up parts of the river and further affecting water flows and the ecology of fish. Sediments may also be trapped behind dams and in reservoirs. This means that not enough sediment makes it downstream to be deposited in floodplains and deltas.  This leads to a loss in soil fertility and the subsidence or shrinking of deltas.

Please zoom in and out to see rivers in greater detail. For an overview of rivers and lakes with hydrosheds, please visit the map explorer.

Since 2007, the Mekong and Salween rivers have been considered part of the world’s top ten rivers at risk. 1

Threats to the rivers include dams, over-extraction (of water and sand), over-fishing, pollution, transport and shipping, climate change, loss of watershed forests and wetlands, and invasive species.

The most important lake in the region is the Tonle Sap, or “Great” Lake. As a key aspect of the Mekong River’s flood pulse, it plays a critical role in maintaining the environmental health and biodiversity of the Lower Mekong River. Located in the northeast of Cambodia, it has been considered a UNESCO Biosphere Reserve since 1997.2 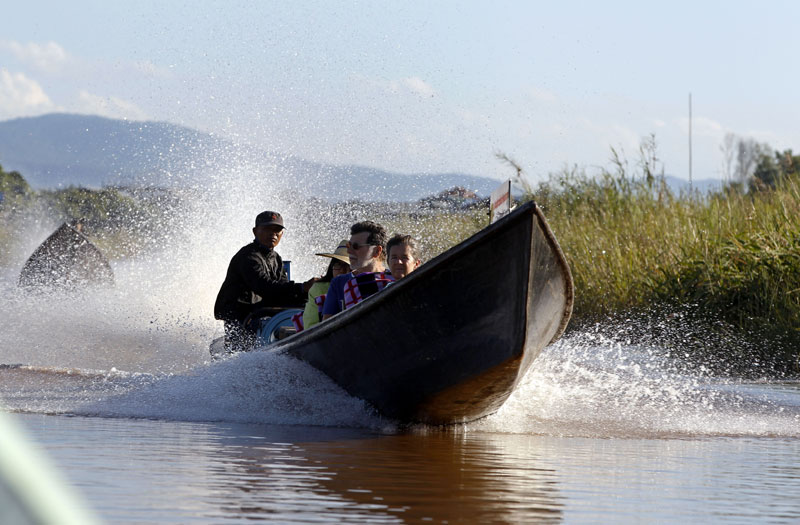 Other important lakes include Myanmar’s Indawgyi, which is Southeast Asia’s largest lake and one of its most biodiverse; and Inle, another large and biodiverse lake in Myanmar, increasingly important for tourism.

Read more about the region’s most important river system, the Mekong.