The water that collects under the soil’s surface is called ‘ground water’.

When water seeps into the earth after rain or a flood, it fills the spaces between the rocks and soil particles providing moisture for plants, and then percolates down into larger spaces called aquifers, which can be likened to underground ponds, lakes or rivers. Ground water naturally flows to the surface again as springs and wetlands. 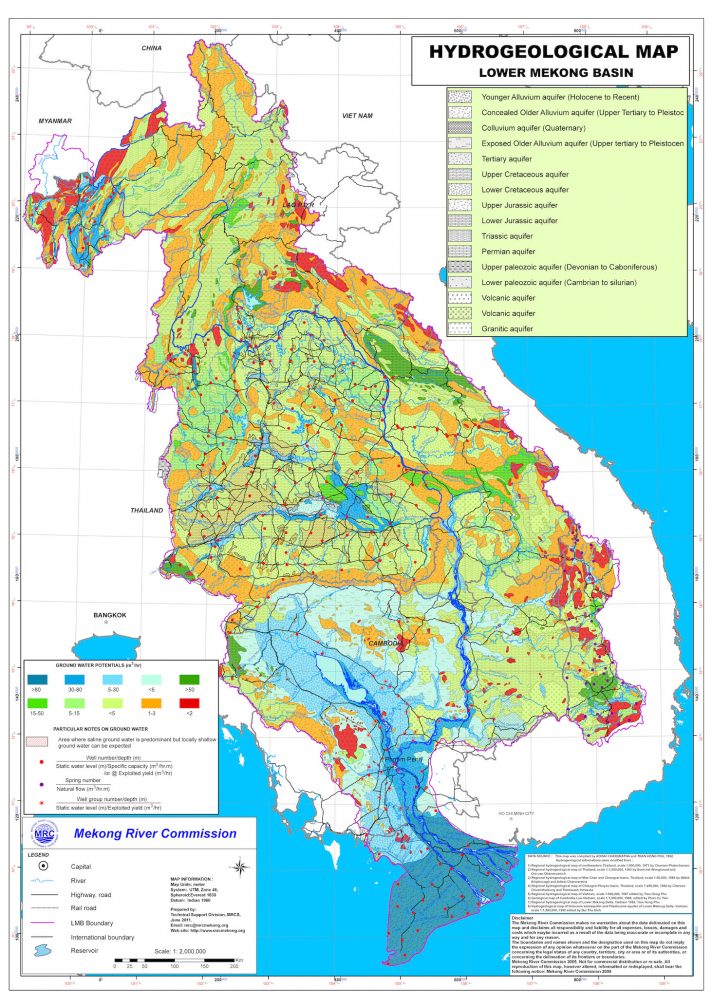 This study undertaken by the Mekong River Commission (MRC) in 1978 (and only recently published) details aquifers and soil layers at the time. It is likely that much of this data is now outdated, however they are a good baseline for any future studies.

In the Lower Mekong Basin, total ground water reserves are thought to be about 100 to 300 km3.1

While there are eight main transboundary aquifer systems in the Lower Mekong Basin, they are not extensive as many are located along high elevation areas that are characterized by low-yield bedrock, which is not conducive to ground water collection.2

Ground water is often favored for household use (via wells), city water systems, and industrial purposes (especially commercial agriculture) as it tends to be less affected by pollution and can be accessed in any season. For instance, freshwater aquifers located in the mountains of Laos and Vietnam’s central highlands, are pumped to provide irrigation for coffee plantations.

While surface water has been the dominant water source for the Mekong region in the past, household wells and large-scale, deeper pumping for municipal and industrial purposes—including irrigation—have increasingly tapped into ground water over the last few decades. The huge proliferation of wells, mostly since the 1990s, demonstrates this. In the Mekong Delta alone, there are now more than one million wells.3

There is growing evidence that ground water is being exploited at unsustainable levels.4 5 At the same time, there is increasing interest in further expanding the use of ground water for agricultural irrigation and aquaculture.6 Preliminary research, as early as 2003, suggests that they are mostly not adequate for this purpose—at least for the Lower Mekong Basin aquifers.7

To be sustainable, ground water must be recharged faster than it is drawn down.

The region’s hydro-geology is such that many aquifers are typically recharged upstream, where watersheds are being damaged by deforestation. Rather than rain and flood waters percolating into the ground as they would in an intact forest, more often water quickly drains off the surface into rivers and is lost during the wet season.

An extensive system of shallow aquifers around Cambodia’s Tonle Sap, Bassac and Mekong rivers is recharged from seasonal flooding, but the recharge rate is slow and extraction is outpacing it.8

As aquifers run dry, they contribute to ‘land subsidence’, or the lowering of land-surface elevation. In other words, the ground above the aquifer starts to sink. This affects the depth and duration of flooding, and can damage infrastructure. As an example, the heavy (and mostly unregulated) extraction of ground water in Siem Reap, combined with the loss of forest and disruption of the natural hydrology that recharges aquifers, put the Angkorian temples at risk by the early 2000s.9 While the subsequent institution of a centralized water system was an important step to better managing the environment, the over-extraction of ground water and the disruption of the upstream watersheds necessary for aquifer recharge continue to pose risks to the World Heritage site.

Coastal and delta cities are particularly vulnerable to land subsidence, which globally now exceeds absolute sea level rise up to a factor of ten. That is ground levels are dropping 10 times faster than sea level is rising. 10 Ho Chi Minh City and Bangkok are both on track to sink below sea level if action is not taken to reverse the trend.11

The delta risk data evaluates the risk to deltas due to sea level rise and human drivers of delta land subsistence. Note: The Hong Delta here is an alternative name for the Red River Delta in northern Vietnam. Source: Deltas at Risk. Created by ODI September 2016. Licensed under CC BY-SA 4.0.

Subsidence also leads to saltwater intrusion in coastal and delta landscapes. This is not just due to inadequate surface water reaching the lower reaches of a river, but also due to the depletion of ground water. The empty spaces created by over-pumping become vulnerable to the infiltration of saltwater, making ground water brackish and unusable for drinking and most agricultural purposes. In the process, saltwater also raises the level of soil salination, progressively rendering it unusable for agriculture.12 Between late 2015 and May 2016—in a record-breaking seasonal drought—over 50 percent of the arable lands in the Vietnamese Mekong Delta were affected by saltwater intrusion, and as much as 70 percent of the annual rice yield was lost.13

A further consequence of intensive pumping and land subsidence is the intensification of ground water contamination by arsenic, which is pulled from deeply embedded clays as the ground structure breaks down. This renders ground water unfit for consumption. Arsenic also contaminates shallow wells when certain bacteria breakdown soil and sediment particles as water filters through the ground.14 Arsenic contamination is an issue on Vietnam’s Red River Delta, where it has even affected drinking water in Hanoi15 and is pervasive in much of the Mekong Delta in Vietnam and Cambodia.

A Stanford University study in Cambodia noted that the development of dams could further exacerbate arsenic contamination16 by creating unnatural reservoirs and associated wetlands that remain saturated year-round. The bacteria associated with breaking down and releasing arsenic would thrive in such conditions. In 2009, UNICEF estimated that as many as 2.25 million Cambodians could be at risk for arsenic poisoning, also called arsenicosis. More than 100 million people have been poisoned by drinking arsenic-laced water in South and Southeast Asia.

Arsenicosis or arsenic poisoning is caused by elevated levels of arsenic in the body. Arsenic is a naturally occurring metalloid found in many minerals, usually in combination with sulphur and metals, and is often present in soils and sediment. Arsenic poisoning is caused by drinking contaminated well water over a long period of time. Arsenic may also be absorbed into food crops such as rice when irrigated with ground water. Since arsenic is flavorless and odorless, people are not aware they are being poisoned until symptoms are advanced. When the disease becomes acute, symptoms include changes in skin pigmentation, severe diarrhoea, vomiting, cramping, blood in urine, headaches and confusion, and eventually coma and death.

When industrial activities increase—as they have in the Lower Mekong Region—ground water is further subject to contamination by man-made products such as gasoline, oil, pesticides, and other chemicals that may seep into the ground water and make it unsafe for human or animal use. Ground water may also be contaminated by improperly treated sewage or human waste.

Until recently, little attention has been given to ground water in most of the region, since water from all sources has been seen as an abundant resource. The dynamics and status of the region’s ground water systems are not yet well-understood, and have not been systematically monitored; however, recent research suggests that ground water capacity is limited, already being over-exploited and subject to pollution.17