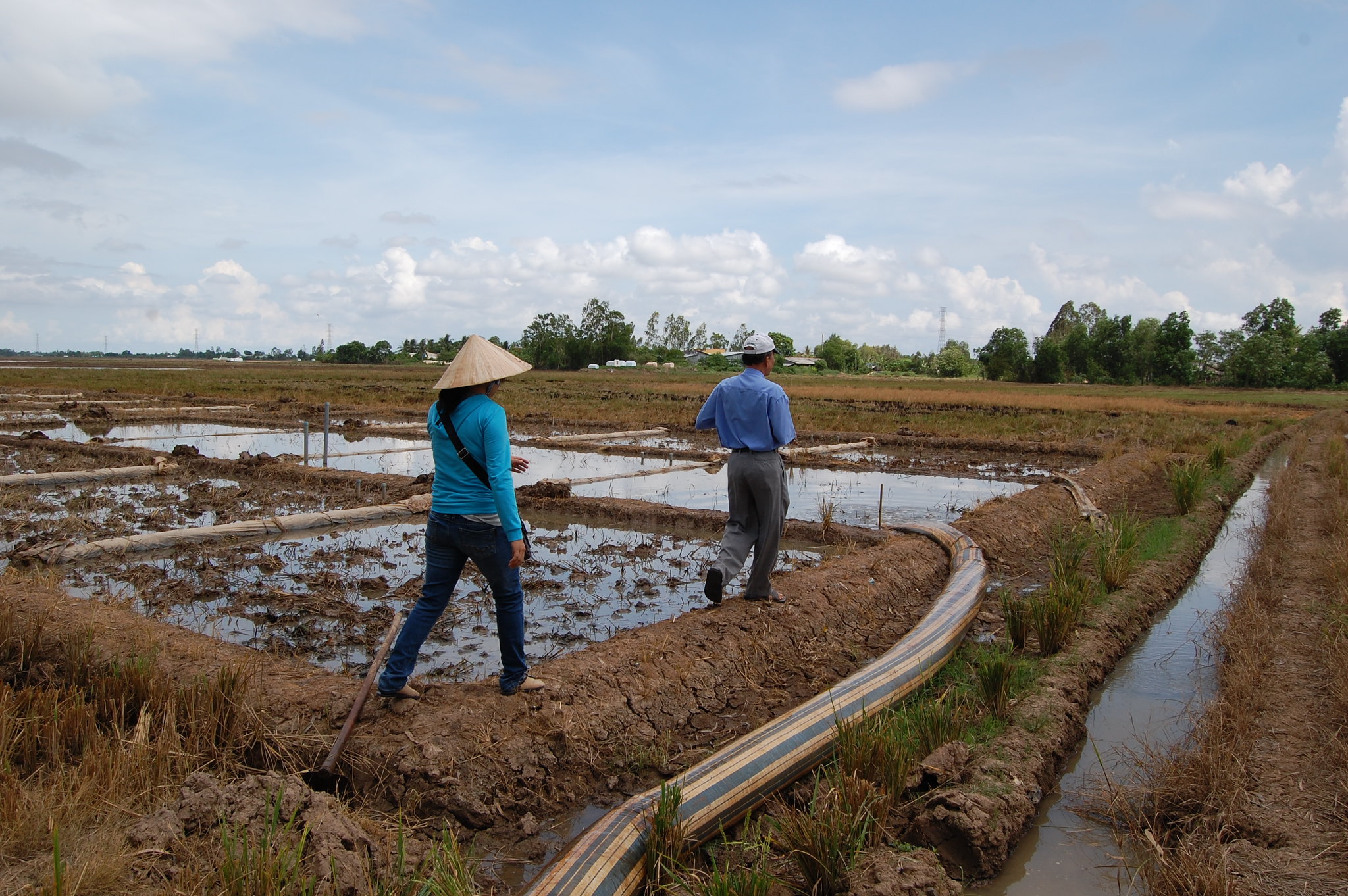 In the above photograph, climate change adaptation might be to develop climate resistant crop varieties, whereas a climate change mitigation project might be to improve the capacity of the soil to sequester carbon. Source: V. Meadu (CCAFS) via Flickr, License: CC-A-NC-SA-2.0.

Adaptation projects are usually more locally focused, although national support is necessary in the form of strategic planning and policy making. Each country in the LMR has developed and approved national level climate change strategies that address adaptation. The UNFCCC has also developed a process by which least developed countries develop “National Adaptation Programs of Action”, identifying urgent and immediate adaptation needs of each country.4

A regional approach to adaptation is also very useful, given that climate change does not observe country borders. This is particularly important in a region like the Lower Mekong Subregion, where over 60 million people, primarily poor and living in rural communities, are linked by and highly dependent on a single water source – the Mekong River.

At the regional level, adaptation primarily looks like capacity building5 and collecting data.6 In contrast to mitigation projects, which require synchronized efforts at a national, regional, or international scale, adaptation efforts can look like many different things. This is because each project needs to respond to the unique needs of the people on the ground. As such, in a middle income country such as Thailand you see a community focused case study on adaptation to sea level rise,7 while in the lower middle income countries highly dependent on agriculture and fisheries, you see climate smart agriculture being developed in Lao PDR, 8 rural road development in Cambodia,9 small scale water management infrastructure development in the dry zone of Myanmar,10 and sewerage and flood prevention facility upgrades in an urban setting in Vietnam.11 Of course, these are just a few of the many projects ongoing in the region. As these examples suggest, the majority of adaptation projects in the LMC are on capacity building, scientific innovation, or infrastructure development. Slowly gaining traction are adaptation projects using ecosystem-based approaches, emphasizing environmental conservation and sustainability approaches. Leading the region in this area is Vietnam, with projects such as mangrove rehabilitation.12

Climate change requires, and has attracted, the attention of the international community. It has been enshrined in the Paris Agreement, forms the meat of SDG 13 on Climate Change, and is implied in SDG 15 Life on Land. Projects using adaptation strategies like the ones stated above have had the ability to tap into a variety of streams of funding, including multilateral funding specific to climate change adaptation. Examples include the Adaptation Fund and the Pilot Program for Climate Resistance. Other funds, like the Global Environment Facility, the Nordic Development Fund, and the Green Climate Fund, are open to fund both adaptation and mitigation activities.

It might seem excessive to spend so much time clarifying what climate change adaptation actually is. After all, the nexus between adaptation and mitigation is recognized, not least with regard to financing. For example, the UNFCCC’s Adaptation Fund, which funds adaptation activities, is primarily funded by GHG emissions activities conducted under the Clean Development Mechanism. Yet, ambiguities in the definition of “adaptation”, especially in high-level, international conventions like the Paris Agreement, has led to confusion in how exactly to take action.15

Because climate change adaptation projects touch on a wide range of other project sectors, project managers do seek co-financing. Further, as the LMC develop, grow, and shift in economic status, they will need to be able to access different types of financing. However, without proper definition, projects run the risk of duplication, inefficiencies, and losing sight of its adaptation aims, and the purpose of adaptation specific funding is muddied. Coordination and cooperation is needed to fully address the risks associated with climate change.

Another concern is that development funds have occasionally been provided with regard to internationally agreed safeguards. The future framework for development financing will need to incorporate climate finance. Some Asia-Pacific countries already devote significant domestic resources to climate change activities. While some countries raise funds domestically, others rely almost exclusively on bilateral and multilateral funds. Cambodia, for example, depends on international sources for 86 per cent of its climate-related expenditure.16