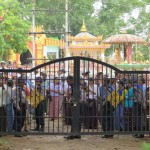 Three activists have been sentenced to four months in prison for holding a prayer session in support of student demonstrations earlier this year, the latest in a string of convictions for violating Burma’s controversial Peaceful Assembly Law.

Myint Myint Aye, 57, Khin May Si, 65, and May Thet Oo, 54, were founding guilty of holding an assembly without permission by the Meikhtila Township Court on 10 July, a breach of Article 18 punishable with up to six months in prison.

“They said they were just praying but they held placards while walking to the pagoda, which was performed like a public rally and requires a permit,” said township court Justice Maung Lwin. “Since they held a public assembly, I’ve decided on my own decision that they should serve four months in prison.”