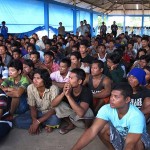 Authorities in Papua New Guinea have rescued eight fishermen held on board a Thai-owned refrigerated cargo ship, and dozens of other boats are still being sought in response to an Associated Press report that included satellite photos and locations of slave vessels at sea.

Officials said the fishermen appeared to be part of a larger group of forced labourers being transported from Thailand to be distributed onto various fishing boats, said George Gigauri, head of the International Organization for Migration in Port Moresby, which has assisted with the operation. He added that nearly 20 other crewmembers from the Blissful Reefer have not yet been questioned, and that if victims of trafficking are found, “there are lives at risk.”