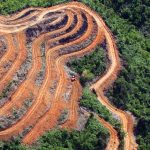 Borneo, home to animals like orangutans, rhinos, elephants, and proboscis monkeys is also host to some of the fastest plantation expansion in the world. Now, a new study published on September 9 in Nature’s open access journal Scientific Reports examines how much of this expansion has been happening at the expense of primary forest. It finds that plantations in Indonesian Borneo have historically driven less deforestation than researchers expected – but this seems to be changing. Borneo is the planet’s third-largest island, demarcated by three countries: Indonesia, Malaysia, and – occupying a tiny corner of the Malaysian side – Brunei. Its relative geographical isolation has led to the evolution of unique species, with 44 of its more-than 200 known mammals endemic to the island, meaning they’re found nowhere else in the world. Along with Sumatra, Borneo is the only place on Earth where elephants, orangutans, and rhinos coexist. Its mountainous rainforest comprises at least 15,000 plant species, of which 6,000 are endemic.