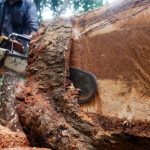 Despite the presence of a blanket ban by the Cambodian government on all trade in Siamese rosewood since 2013, exports of the precious timber to Vietnam increased in the third quarter of this year, according to Vietnamese customs data compiled by US-based NGO Forest Trends. Between January and June, 17 cubic metres of rosewood, valued at $38,151, were registered as entering Vietnam from Cambodia. By the end of September, that figure had increased more than five-fold to 90 cubic metres, with a registered total value of $258,983. In 2013, the same year that Cambodia outlawed its trade, Siamese rosewood was listed by the UN Convention on International Trade in Endangered Species as a protected species. Under the convention, cross-border trade in listed species must be accompanied by import and export permits issued by both countries’ CITES Management Authorities, which are staffed by employees of each countries’ government.