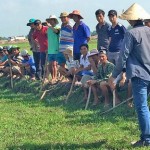 Cambodian and Vietnamese officials will visit Svay Rieng province next week as part of efforts to resolve ongoing border disputes, but the exclusion of journalists has sparked criticism over the negotiations’ lack of transparency.

Border Post 203 in Kampong Ro district has been a flashpoint in a rumbling conflict between the two nations, with violence erupting between Vietnamese civilians and authorities and a visiting group of Cambodians on June 28.

According to Cambodian Border Affairs Committee vice chairwoman Koy Pisey, the Cambodian delegation will be led by Foreign Ministry Secretary of State Long Visalo, and the clash will be on the agenda on July 16.