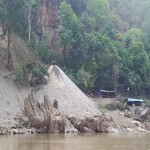 An Australian company contracted to assess the potential environmental and social impact of the planned Mongton dam has responded to recent criticism of the consultation process, saying that interference with its data collection efforts could lead to “suboptimal outcomes for the affected communities.”

The Snowy Mountains Engineering Corporation (SMEC) has faced significant local opposition since holding its first public consultations on the project on March 10 in Taunggyi, Shan State. It cancelled a planned public meeting on April 30 in Shan State’s Kunhing—a township in the path of the proposed dam’s massive reservoir—where hundreds of locals had gathered to protest the project.

SMEC was appointed to conduct the Environmental Impact Assessment (EIA) and Social Impact Assessment (SIA) for the hydropower project which is backed by three Chinese companies, China Three Gorges Corporation, China Southern Power Grid and Sinohydro; the state-owned Electricity Generating Authority of Thailand (EGAT); and local conglomerate the International Group of Entrepreneurs, owned by the sons of Union Solidarity and Development Party lawmaker Aung Thaung, who was placed on a US Treasury blacklist last October.