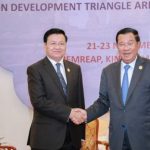 Just weeks after Laos announced its plans to begin constructing a third mainstream dam in the Lower Mekong River region, Prime Minister Hun Sen used a bilateral meeting with his Laotian counterpart to signal that the controversial Don Sahong dam will no longer receive opposition from Phnom Penh. “After Cambodia inspected the situation, it does not have a problem with this development project,” Hun Sen wrote on his Facebook page, thanking Laos for its pledge to sell low-cost electricity to Cambodian provinces located near the dam. Laos first announced its plans to build the controversial 260-megawatt dam in 2015. According to a 1995 Mekong River Commission agreement, Cambodia, Laos, Thailand and Vietnam must engage in joint discussions before big development projects are launched. But critics say downstream countries have no real power to impact the plans, since Laos began constructing two controversial dams, the Xayaburi and Don Sahong, despite concerns from Cambodia and Vietnam. Cambodia’s about-face shows the consultation process has failed to ensure concerns from downstream countries are addressed, said Maureen Harris, Southeast Asia program director for NGO International Rivers.