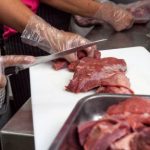 SLN Meat Supplies, the company behind Cambodia’s first industrial slaughterhouse, is hoping to secure an export contract to supply $50 million worth of halal beef to a Malaysian distributor. This would be the company’s first overseas export agreement, and a much-needed boost to secure regular orders of Australian live cattle imports. Hor Sim Leang, SLN’s managing director, said on November 24 that the company hopes to finalise a memorandum of understanding in the coming weeks with Malaysia’s Halal Industry Development Corporation after the chairman of the company, Rizuan Bin Abd Hamid, brought a delegation for a site visit. “The $50 million worth of beef that we agreed on is still being negotiated and we hope that when they come back in the next couple of weeks for another inspection, we will finalise the deal,” he said, adding that the HDC believed it could get a better deal sourcing from Cambodia rather than importing Australian beef directly. “This would be our first export agreement and we are still hoping that we will sign agreements with China and Laos soon,” he said.