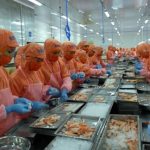 It has been five years since the economic restructuring programme was launched, and despite some improvements to the Vietnamese economy, there has been little change in the growth model. For that reason, many have called for a reconsideration of the restructuring methods used over the past five years, saying that identifying their drawbacks and working out solutions to them will push through and steer restructuring efforts onto the right path in the time ahead. The restructuring programme for the 2011-2015 period brought about some noticeable results, but failed to meet many fundamental targets.  According to Tran Dinh Thien, Director of the Vietnam Institute of Economics, restructuring is a key task to which prominence was given by the 11th Party Central Committee. But when it was put into practice, the process took place at a very slow pace. He said the problem might lie in a lack of motivation for restructuring, which led to results below expectations. Specifically, the public investment mechanism was in fact largely unchanged and was still based on the practice of asking and giving, while the budget was increasingly strained and public debt was growing quickly. The banking system has weathered the storm, but the mass of bad debt has remained mostly unresolved and has even grown in size.