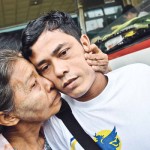 U Aung Kyaw, deputy director of the Department of Relief and Resettlement, said on 10 July that the return of the 123 fishermen was the first in two years.