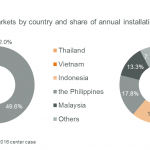 The Association of Southeast Asian Nations or ASEAN is a political and economic organization of ten Southeast Asian countries. Formed in 1967 by Indonesia, Malaysia, the Philippines, Singapore and Thailand, membership has since expanded to include Brunei, Cambodia, Laos, Myanmar and Vietnam. Covering more than 4.5 million square kilometres and comprising a population of more than 600 million people, ASEAN is about the size of the European Union. But these are probably the only similarities the two economic unions share. While the EU currently has more economic power, is further developed and is a politically more integrated trade zone, when it comes to GDP growth, ASEAN, is by far the more dynamic. For the last five years, its annual GDP growth averaged around 6%. In 2015, the organization’s combined nominal GDP had grown to more than USD 2.6 trillion. If ASEAN were a single entity, it would rank as the seventh largest economy in the world behind the USA, China, Japan, Germany, France and the United Kingdom. With such economic growth levels expected to continue, ASEAN is fast becoming a major economic force in Asia and a driver of global growth.