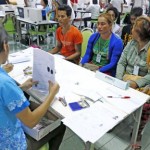 More than 100,000 Cambodian workers in Thailand could face arrest and deportation after the deadline for reapplying for a work permit extension came and went.

The Thai government had previously pushed back a March 31 deadline, giving undocumented workers until June 30 to extend their work permits for a year, in which time they were expected to be issued passports by their respective governments.