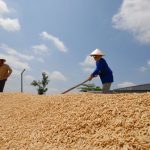 Young people are leaving the Mekong Delta, Vietnam’s rice bowl, while the region’s economic growth is declining. These issues were discussed at the conference about socio-economic development of the Mekong Delta 30 years after the economic reforms implemented in 1986 held by Vietnam Academy of Social Sciences on October 28. Nguyen Van Sanh, Director of the Mekong Delta Research Development Institute, said the Mekong Delta had recorded many achievements in the past years but its current situation was worrying. “The region’s GDP in 1990 is half again as much as Ho Chi Minh City’s but this has changed because of the shortcomings in the region’s economic structure,” he said. For a long time, Mekong Delta depended on rice fields. It only pays more attention to aquaculture and fruit recently. It has hardly developed any industrial zones or service industries back then, causing difficulties for 2.8 million households. The region recorded annual economic growth of 10% in the 2001-2010 period, but this had fallen to 8.8% during the 2011-2014 period and 8% in 2015. Agriculture has become less important, as it only accounted for 33% of the region’s GDP last year compared to 54% in 2000. Meanwhile, construction and industrial zones accounted for 26%, up from 18% in 2000 and the service industry was 41%, up from 28%.