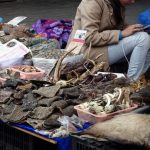 Mongla lies on the border of the Xishuangbanna Dai Autonomous Prefecture in southwestern China and Shan State in northeastern Myanmar. Situated in the heart of the Golden Triangle, the city is known among other sad epithets as the wildlife trafficking capital of the world and for drugs, gambling, and prostitution. Despite officially belonging to Myanmar, the area operates as a special armed region, making it both difficult and expensive for most Myanmarese and non-Chinese nationals to visit. Furthermore, its overwhelming influence from China—ranging from its currency, technology, and infrastructure to the language, entertainment, and food—also deters Myanmarese and foreign tourists in Myanmar from visiting Mongla. Instead, it is frequented annually by hundreds of thousands of visitors from mainland China, who drive across the border “illegally” from Daluo without a visa or border pass. Despite their unauthorized status, there is little that is either secret or mysterious about their travel and whereabouts. Mainland Chinese enter Myanmar on roads that circumvent the official port of entry, but are still monitored by local government officials, who jot down names and receive US$8 in cash per visitor.