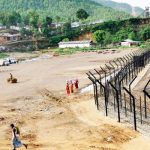 Pilgrims, traders and adventurous holidaymakers can soon look forward to the opening of a new border gate between India and Myanmar, officials say. Immigration Minister U Thein Swe said the new international border gate at Tamu, Sagaing Region, would open soon. He said the Indian authorities were “enthusiastic” about the opening. “We’ve already met with the Indian ambassador, who said his government wanted to open the gate. We expect it will be open within the next four months,” he said, adding that the signing of the agreement was now under discussion between the two governments’ foreign ministries. The minister was responding in the Amyotha Hluttaw to a question from MP U Maung Maung Latt (NLD; Sagaing 9) who had asked when the Tamu border gate could open to permit tourists to enter. “The Tamu border gate will promote improvements in religious, social and commercial contacts,” he told MPs. The Tamu gate would be the fifth, after Tachileik, Myawady, Htee Khee and Kawthoung, where tourists can already cross.