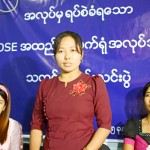 Factory workers have had enough of the arbitration council, the nascent, quasi-judicial body established to resolve labour disputes through mediation.

Nearly 200 garment workers fired in the wake of the new minimum wage have decided to by-pass the conciliation system altogether, alleging that the members are biased in favour of employers. After the Yangon arbitration body recommended the Asia Rose garment factory rehire just seven of the 196 sacked employees while compensating the others, the out-of-work factory hands decided on 21 September to sue their bosses.

The workers allege they were fired without due warning as the factory attempted to cull its payroll following the enforcement of a minimum wage three times more than the former industry standard.

“The employer did not include enough witnesses before the council gave their order. The council also made its decision without getting any proof from the factory, so we do not trust them,” said Ma Khaing Maw Lwin, a member of the Asia Rose factory’s union.