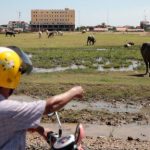 Chea Sophat stood on the gravel embankment of a road as he pointed to what was once his rice field, an unfenced, 4,000-square-metre waterlogged plot with a handful of buffaloes wallowing in the mud. Across the Tonle Sap river, Phnom Penh was celebrating the festivities of the Water Festival – longboat races, music concerts, an appearance by the King – but on Chroy Changvar, 63-year-old Sophat was consumed by worry. “The land was used for farming before the company filled it with sand. Now I cannot use it,” he said, pointing to mounds of sand scattered around his plot that have destroyed the land’s ability to drain. Passing motorbikes and cars tossed up clouds of cement dust and sand on the nearby road being constructed for what has been dubbed the “City of the Future”. Sophat’s land is in the process of being seized by the Phnom Penh Municipality to facilitate the development of the $1.6 billion Chroy Changvar satellite city. The 387-hectare development promises modern condominium and villa residences, a sports stadium, a business district and even a new bridge and rail system connecting it with the city.