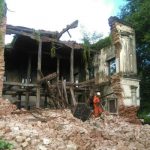 A powerful 6.8 magnitude earthquake hit central Myanmar on August 24, the US Geological Survey reported. The quake, which the agency said struck at a depth of 84 kilometres, was felt in Yangon, as well as in the Thai and Bangladesh capitals. Officials from Myanmar’s Relief and Resettlement Department confirmed four casualties, as well as damage to 68 stupas and pagodas. The epicentre was near Chauk, a town on the Ayeyarwady River around 30 kilometres south of Bagan, Myanmar’s most famous archaeological site and home to more than 2,500 Buddhist monuments. “Some famous pagodas were damaged during the earthquake,” a tourist police officer from Bagan said, adding some of the damage in the major tourist destination was “serious”. Soe Win, a regional MP from the township in Magwe region, told AFP the tremors lasted for several minutes.