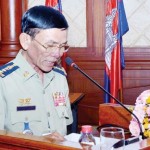 Drug use in Cambodia’s prison system is not limited to inmates alone. Prison guards too have been found to be using illicit substances, senior prison officials have acknowledged, with the government set to launch an investigation into the prevalence of drug use among prison staff in rural areas.

Speaking during an annual meeting of the Ministry of Interior on 25 February, Huy Hoeun, deputy director general of prisons, said that Correctional Centre 4 (CC4) in Pursat province had recently carried out some blood testing of both prisoners and guards, and found traces of drugs in some staff members, as well as the inmates.