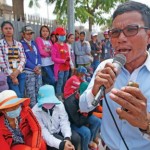 In a strongly worded defence of the proposed trade union law, employer association CAMFEBA released a position paper on 2 September claiming the law would curb instances of illegal strikes and a proliferation of minority unions, which it says is needed to harmonise the country’s troubled industrial relations.

With an average of seven registered unions per factory, across more than 600 garment and footwear exporters, the Cambodia Federation of Employers and Business Associations, or CAMFEBA, said the multiplicity of unions impeded consensus-building and restrictions were needed on the number of people needed to form a union.