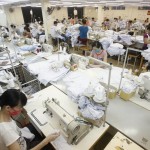 Vietnam looks to raise its minimum monthly salary by just above 10 percent next year, the lowest level since 2013, a move that apparently bows to the growing pressure of the corporate sector.
Under a government decree that took effect early this year, Vietnam raised the wage floor to VND2.15-3.1 million (US$101.4-$146.2), or 15 percent, depending on the location. The government also approved a minimum-wage hike of around 15 percent in 2014.
But at a recent dialogue on wage polices, Vu Tien Loc, chairman of the Vietnam Chamber of Commerce and Industry, told the press that his organization proposed an increase of “above 10 percent” to offset the recent currency depreciation and make sure that the salary raise is in line with the current labor productivity.