The Lower Mekong is one of the most disaster-prone regions in the world. Its five countries are frequently affected by natural disasters such as flooding, typhoons and droughts.

Thailand and Myanmar were among countries hit by the 2004 tsunami that killed 228,000 people, and in Thailand alone, resulted in damages of more than US$2.2 billion.1 In 2008, Myanmar suffered Cyclone Nargis, which caused the country’s worst natural disaster on record, killing 84,537, affecting 2.4 million more people, and causing an estimated US$10 billion in economic damage2 In July 2015, Myanmar was again hit by a large typhoon, Cyclone Komen, causing massive flooding and storm damage in its  western region. The emergency  affected 1.6 million people3. At the same time, northern Vietnam fell victim to a week-long monsoon, resulting in record rains, and leading to floods and landslides that  were particularly damaging in Quang Ninh province (see also “large scale accidents and man-made disasters” below.)

As devastating as those  disasters were, the most expensive disaster the region has seen  to date was the 2011 flooding that inundated large areas of Thailand, Cambodia and southern Vietnam and cost Thailand alone an estimated $46 billion4, making it the one of the costliest natural disasters in history.5 While the floods were blamed on exceptionally heavy monsoon rains, in Thailand there were disputes over whether mismanagement of Thai dams had contributed to the crisis. Bangkok was largely saved from flooding but at the cost of other areas. Thailand’s auto industry, a major contributor to its GDP, suffered significantly. The floods are correlated with a significant contraction in Thailand’s industrial growth in 2011. (See “Industry sector annual growth” on Industries.)

Although the Lower Mekong Basin is naturally subject to cycles of seasonal flooding and occasional drought, these are exacerbated by  loss of forests and changes to natural hydrology. The average annual flood damage for the Lower Mekong Basin is estimated to be US$60–70 million per year and is concentrated in Vietnam and Cambodia.6 Floods are also the main cause of disasters in Laos, in terms of both frequency and consequence. In 2014, Cambodia experienced severe flooding from the Tonle Sap eastward, while there were simultaneous droughts in Oddar Meanchey in the northwest, and Takeo in the south. 7

From early 2015 to mid-2016, the Lower Mekong states experienced a historically severe and prolonged drought, considered to be the worst ever in Vietnam,8 and the worst recorded in 50 years for Cambodia.9  In March 2015, Thailand declared 28 provinces disaster regions, with drought having destroyed 112,000 ha of farmland and affected more than 63,000 families.10 In June, Cambodians were reporting that wells were running dry.11 In July and August when deluging rains threatened crops in some provinces, other Cambodian provinces were still in drought.

Attributed to the 2014-2016 El Niño weather event, the drought peaked between February and May 2016, with Vietnam the most severely affected country in the region. During this period, 2 million people were estimated to be without access to water for consumption and domestic use, while a further 2 million lost income due to lost and damaged livelihoods. Over one million people were food insecure, and total costed recovery needs for the 18 affected provinces were estimated at VND 27,241.2 billion (equivalent to US$1,221 million).12

Cambodia was also impacted severely, with water shortages recorded in most of the country’s 25 provinces and 2.5 million people severely affected.13 Agricultural households with low productivity and resilience are still affected, despite rains bringing some relief in late July, 2016.14

In Myanmar, 146 villages were drought-affected in 2015, with this figure growing to 300 in 2016.15 Myanmar’s Department of Meteorology has recorded other El Niño impacts, including unusual rainfall patterns, acute water shortages, extreme temperatures and increased fire risk.16 Thailand’s government issued a warning about drought risk in February 2016,17 then announcing in June 2016 that monsoonal rain had relieved the situation.18 A campaign of water diversion from the Mekong and its tributaries carried out in Thailand during early 2016 is well documented.19 20 21

Vietnam, with its long South China Sea coastline, is prone to typhoons, which average five to six per year and result in flooding, infrastructure and property damage, and sometimes high human casualties. In 2009, Typhoon Ketsana destroyed or damaged nearly half a million homes in Vietnam and required the evacuation of more than 400,000 people. Both Cambodia and Laos also suffered significant damage.22

The region is not without risk of earthquakes. Myanmar lies along the Sagaing fault-line which means that earthquakes are a significant hazard. The most recent are the 2011 Tachilek and 2012 Shwebo earthquakes, both at 6.8 magnitude, which left hundreds dead and many more injured.23 Thailand sits on 14 fault lines crossing 22 provinces, though its earthquakes have been less severe than those in Myanmar. The most recent severe earthquake in Thailand was the 2014 6.0 magnitude Chiang Rai earthquake, which damaged houses and property.24 The 2004 tsunami was a knock-on effect of a major earthquake in Indonesia.

Historically, forest fires have not been a major concern in the Lower Mekong countries but are expected to be more frequent as temperatures increase and the region endures longer and more intense dry spells. In one such dry spell in early 2015, fires raged across parts of Thailand and Vietnam, destroying thousands of hectares of forest and causing life threatening air pollution.

Frequent urban fires in the region’s densely packed cities destroyed major markets in every Lower Mekong country in 2014 and 2015. They are often associated with faulty electrical systems and dry periods.

Other large-scale accidents and man-made disasters also threaten the environment and public safety. For example, an oil spill occurred off the coast of Thailand’s Rayong province in 2013, with varying estimates of its damage, also demonstrating the country’s lack of preparedness to deal with such emergencies.25 In July 2015, heavy rains triggered landslides and collapsed a number of small coal mines, burying  a  town in northern Vietnam’s Quang Ninh province, dumping toxic waste into Ha Long Bay and potentially threatening the Ha Long Bay World Heritage Site. Vietnam responded swiftly to the accident, securing World Heritage Site from pollution, but overall damages amounted to at least US$123.8 million; seventeen people were killed.26 The incident highlighted risks associated with industrial development, particularly when combined with a natural disaster.

The Lower Mekong, along with the rest of ASEAN, is vulnerable to pandemics. Since 2000, the region has contained outbreaks of SARS and avian flu. 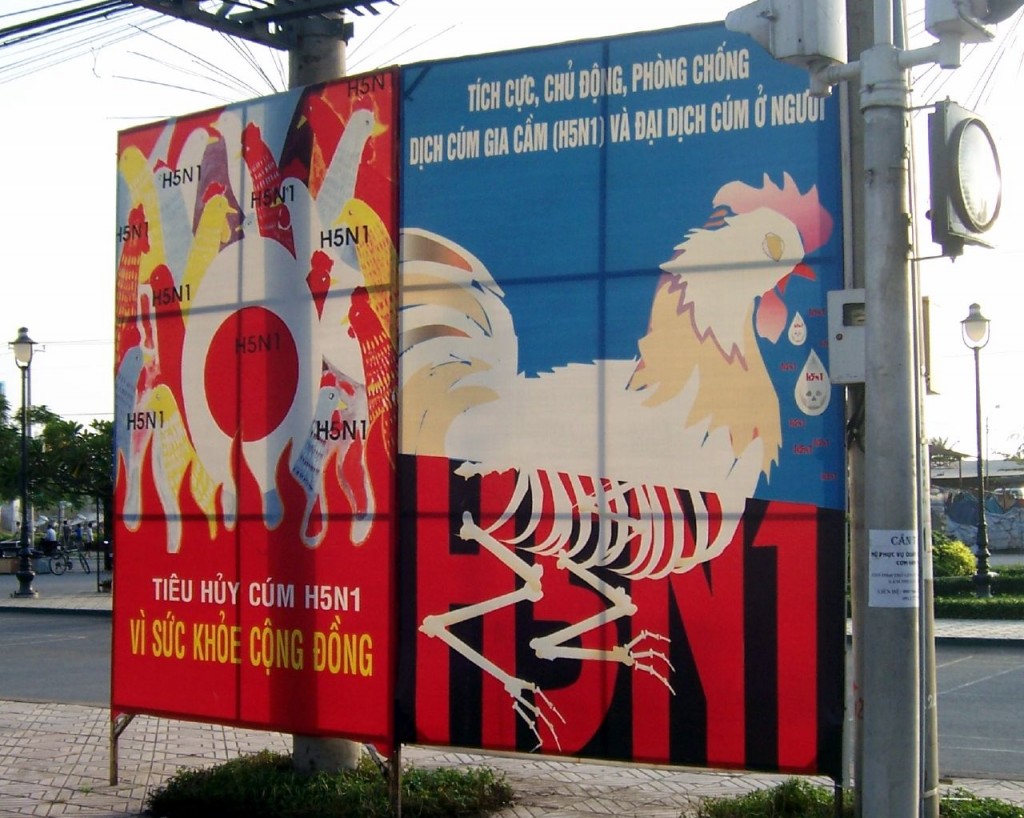 The Mekong region has been identified as high risk for climate change. Increases in temperature, changes in seasonal precipitation, and the length and intensity of dry spells will have enormous implications for agriculture and fisheries, with the potential to threaten food and water security and increase tensions between countries.

Much of the Lower Mekong region is in low lying areas making it extremely vulnerable to rising sea level and salinization. A predicted sea-level rise of 30cm by the year 2050 is expected to accelerate salt water intrusion.27 In some areas of southern Vietnam, salt water has already intruded up to 60km28 upstream of the Mekong Delta into local river systems, threatening thousands of hectares of rice and shrimp farms and affecting fresh water supply.

Other disasters associated with environmental change are landslides and river bank collapses, which follow on forest clearing and river dredging. These have led to loss of life, land and sometimes property in all countries.

Cambodia’s rate of death by lightning has been estimated at 7.8 deaths per million people for the years 2007-2011, one of the highest lightning death rates in the world.29 Vietnam and Thailand also have high rates of lightning strikes. Some experts in the region believe that lightning incidents and casualties have been increasing in recent years, as temperatures also increase.30

The threat of pandemics in Southeast Asian and worldwide is expected to rise due to global travel, rapid urbanization, environmental changes, and increasing virulence of disease. ASEAN and its member states are pursuing strategies to reduce risks, respond to outbreaks, and contain disease but the limitations of health care systems in several Lower Mekong countries add significantly to that challenge. Efforts to stop ebola from entering the Mekong states during a severe outbreak in parts of West Africa in 2014 are an example of the attention that governments are paying to such threats.

Of the Lower Mekong countries, Vietnam and Thailand have the most developed DRR capacity. Since 1995, the European Commission has committed more than € 31.7 million for disaster preparedness projects, focusing on the most disaster-prone areas across the Mekong region: € 13 million in Cambodia, € 6 million in Lao PDR, and € 12.7 million in Vietnam.31 Similarly, USAID’s Lower Mekong Initiative Pacific Resilience Disaster Response Expert Exchange promotes disaster preparedness among the governments of the five Lower Mekong countries. 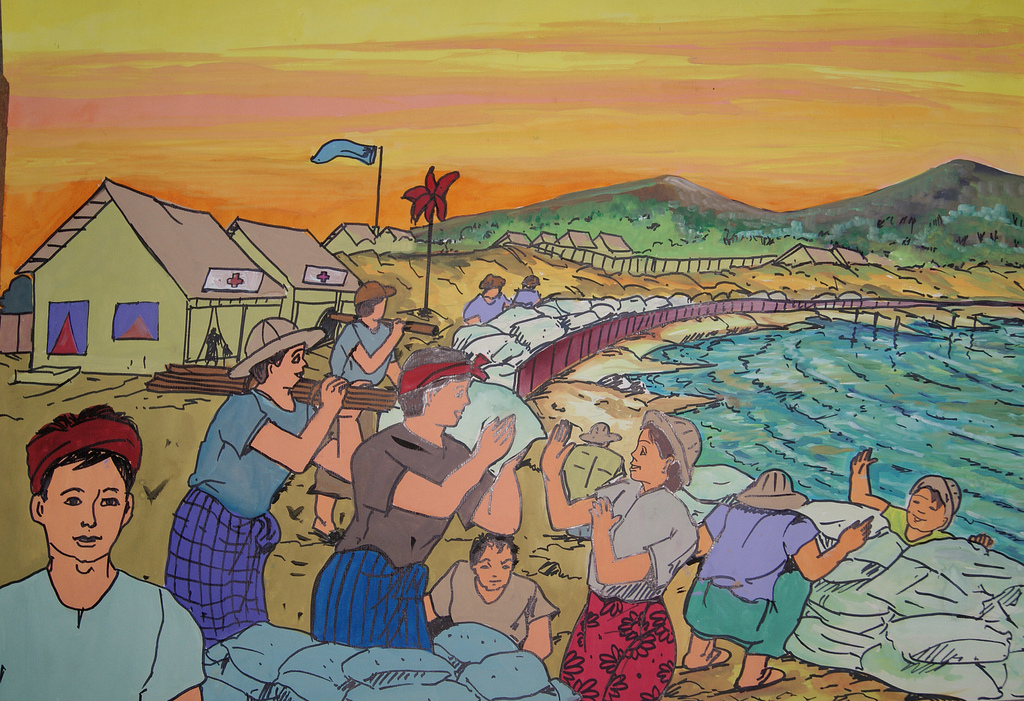 Myanmar – One of the winners of the ASEAN and SAARC drawing competition for 2011. Photo by: UN ISDR. License under Creative Commons Attribution-Non Commercial-NoDerivs 2.0 Generic

In 2005, ASEAN states signed the ASEAN Agreement on Disaster Management and Emergency Response (AADMER), which is among the first legally binding disaster management agreements in the world. The agreement led to the establishment of the ASEAN Coordinating Centre for Humanitarian Assistance on Disaster Management (AHA Centre) in 2011 in Bali, Indonesia. The AHA Centre facilitates cooperation and coordination among ASEAN member states with the UN and international NGOs for disaster management and emergency response.

Working through the Climate Change and Adaptation Initiative and two programs, the Flood Management and Mitigation Programme (FMMP) and the Drought Management Programme (DMP), the Mekong River Commission (MRC) assists four  countries (Cambodia, Thailand, Vietnam and Laos) on flood and drought forecasting and implementation of regional drought and flooding mitigation and adaptation strategies. Flood forecasting is managed by the Regional Flood Management and Mitigation Centre in Phnom Penh.

In the aftermath of the SARS crisis, ASEAN acknowledged that it lacked effective pandemic response mechanisms and institutions at both the national and regional level. To address this challenge, ASEAN established the ASEAN Technical Working Group on Pandemic Preparedness and Response in 2008, and adopted the ASEAN Work Plan for multi-sectoral Pandemic Preparedness and Response. ASEAN also made clear that a pandemic would constitute a disaster in the context of AADMER.

Related to disasters and emergency response