SDG 15 aims to “Protect, restore and promote sustainable use of terrestrial ecosystems, sustainably manage forests, combat desertification, and halt and reverse land degradation and halt biodiversity loss”. The goal has a monitoring framework with 12 targets and 14 indicators. It is seen as a goal that helps with the implementation of many other goals, even though it is primarily environmental, because it is closely tied to issues such as food production and livelihoods.1

A key element of SDG 15 is the conservation and sustainable use of inland biodiversity. This supports the healthy ecosystems that are crucial to the provision of the products (such as food and water) and services (such as climate regulation and aesthetic experiences) that also called environmental or ecosystem services.2 These ecosystem services are closely related to biodiversity, providing access to safe water and coping with the impacts of climate change.3,4 Biodiversity is central to the lives and well-being of at-risk populations, such as rural and indigenous communities.

To achieve the key goal of the SDGs of leaving no-one behind, SDG 15 would ideally be implemented as soon and as effectively as possible, ensuring that the most affected communities are engaged in protecting biodiversity. 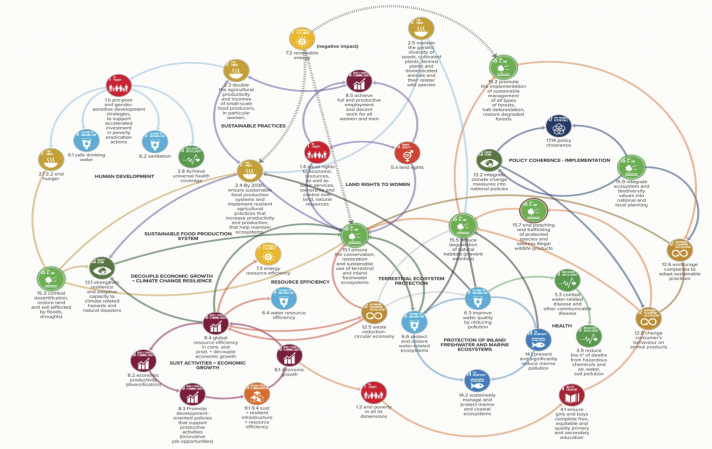 SDG 15 is interlinked with many of the other SDGs. This map is not comprehensive and shows only some of the interlinkages. Source: UNESCAP. Visualisation of interlinkages for SDG 15. Accessed May 16, 2018.

SDG 15 targets cover a broad range of issues around the protection of forests, mountains, wetlands and drylands and include both animal and plant life. This includes:

There are also three means of implementation targets aimed at providing an environment to support biodiversity conservation (15.A), forest management (15.b) and efforts to combat poaching and trafficking of protected species (15.c). These are discussed in more detail below.

SDG 15 is one of the SDGs being reviewed at the High Level Political Forum in July 2018, along with SDG 6 (Clean water and sanitation), SDG 7 (Affordable and clean energy), SDG 11 (Sustainable cities and communities) and SDG 12 (Responsible consumption and production).5 An expert group meeting on SDG 15 was held in May 2018.6

Biodiversity loss, including species extinction, in forests and other terrestrial ecosystems has been on the global development agenda for many decades, and from as early as 1992 through the UN’s Agenda 21.7 This was also a focus of the earlier Millennium Development Goals (MDGs).8 However, progress on the sustainable use and preservation of terrestrial ecosystems has been uneven.9 Globally, forest loss has generally slowed, but biodiversity loss has been accelerating.10 Progress in each region varies.

The Asia-Pacific region saw an increase in forest area from 1990 to 2015. Vietnam lead the region and the LMCs with a 57% increase, but more than 20% losses were recorded for Cambodia and Myanmar.11 Southeast Asia hosts a high level of biodiversity in its forests,12 but this biodiversity is facing serious threat, including extinction of highly at-risk plants and animals such as cycads (an ancient group of cone-producing plants) and amphibians.13

The forests of Southeast Asia are not the only ecosystems under threat. All freshwater ecosystems are covered by SDG 15. As with the MDGs, tracking the scale of protected areas continues to be a key way of following progress on biodiversity protection.

Biodiversity conservation was supported by the UN declaration of the Decade on Biodiversity (2011–2020).14 Governments have agreed to the Strategic Plan for Biodiversity 2011–2020 and its Aichi Biodiversity Targets, which are aimed at implementing the three objectives of the Convention on Biological Diversity (CBD):

A key shortcoming of the MDGs was that biodiversity conservation was not well linked with national plans for socio-economic development.16 To address this, the SDGs have linked the CBD with the Aichi Biodiversity Targets (connected with Targets 15.1, 15.2, 15.5, 15.8, and 15.917), the Nagoya Protocol on Access to Genetic Resources and the Fair and Equitable Sharing of Benefits Arising from their Utilization (connected with Target 15.6) and other internationally recognized conventions through the targets. This enables member countries to consider biological diversity more centrally in local development planning for poverty reduction. 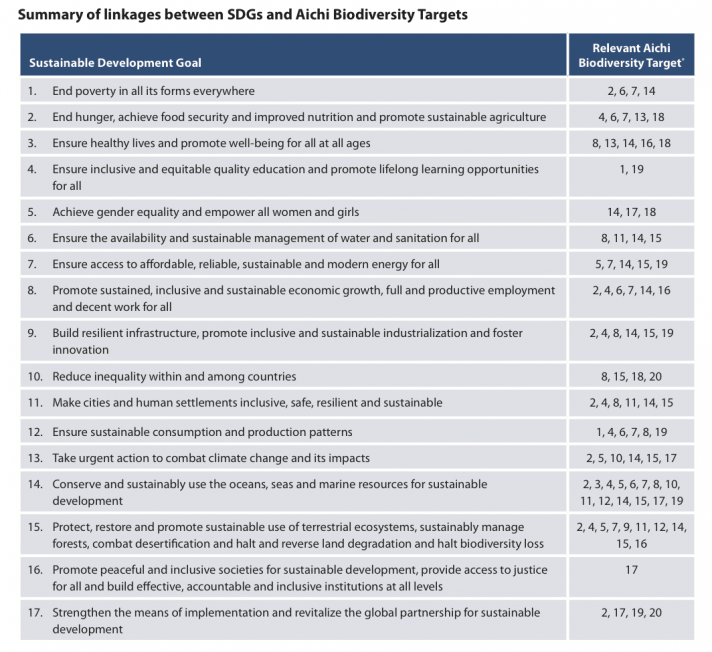 The Aichi Biodiversity Targets are linked with all the SDGs. Source: CBD. Biodiversity and the 2030 Agenda for Sustainable Development: Technical Note. Accessed May 17, 2018.

A number of other UN conventions created before the adoption of the 2030 Agenda provide direct support for the achievement of SDG 15, including:

In addition, indicator 15.5.1 links explicitly to the International Union for Conservation of Nature and Natural Resources (IUCN) Red List. This provides a conservation status for animals, plants, and fungi.18

Another lesson learnt from the MDGs was to consider the SDGs in an interlinked manner. This means that SDG 15 needs other goals to be implemented in order to achieve its own targets, and its own progress will enable targets from other SDGs to be achieved. As an example, SDG 15 is strongly affected by climate change, which can accelerate biodiversity loss and land degradation. Therefore the implementation of SDG 13 (Climate Action) through climate change adaptation and mitigation is closely linked with SDG 15. Plans to meet the two goals should not be considered as separate.

Areas of high biodiversity often stretch beyond national boundaries, and there is growing interest in collaboration on protecting areas of high biodiversity conservation value in the Greater Mekong Sub-Region.19 The importance of regional cooperation was identified by regional leaders as one of six priority commitments for implementing SDG 15.20,21 Leaders of the Asia-Pacific region have identified a lack of clarity regarding responsibilities for managing transboundary resources as an impediment to ecosystem conservation.22

In 2015, the SDG 15 targets were identified as an area where ASEAN nations have moved backwards since 2000.23 The conservation and sustainable management of biodiversity and natural resources is also one of the four priorities focused on in ASEAN’s Socio-Cultural Community Blueprint 2025.24 Deforestation, considered a direct consequence of natural resource-based economic growth in ASEAN, continues to be a major issue,25 including in the LMCs. Progress is being made on terrestrial protected areas, which make up 13.3% of LMC land area,26 closely matching the Asia-Pacific regional average of 13.9%.27 But the illegal wildlife trade (15.7, 15.c) is a primary issue concerning threatened species (such as pangolins in Cambodia and tigers in Lao PDR), and has a negative impact both on the natural capital of a country as well as its economy.28 Tackling this will require sustained regional effort.

The Greater Mekong Subregion, which includes the LMCs and China, is currently participating in the ADB-administered Core Environment Program. The program builds institutional and financing capacity in environmental monitoring, biodiverse landscapes, and climate change.29 Supported by this program, countries are developing cooperative frameworks for biodiversity conservation in border areas.30 For example, Lao PDR, Myanmar and Thailand have negotiated memoranda of understanding with China in relation to some regions along their borders. In February 2018, Cambodia and Thailand negotiated a memorandum of understanding to explore the potential for a transboundary biodiversity conservation corridor.31

Leaders in the Asia-Pacific region identified six priorities for progress on SDG 15, including four on means of implementation. One is the diversification of financing (Targets 15.a and 15.b) and the others are non-financial: integrated data systems, strengthened governance approaches and strengthening regional cooperation.32 Similar priorities were identified by the Asia-Pacific Ministerial Summit of the Environment: strengthening environmental cooperation (including regional dialogue), strengthening environmental governance and institutions and strengthening the scientific basis of policy-making and knowledge sharing.33 Engagement with local communities was also identified as a priority for SDG 15.34

Financing is an issue for all the goals, including SDG 15 and biodiversity, which saw an increase of global official development aid from 2014 to 2015.35 However, in order to implement SDG 15, which has targets that need to be met by 2020, a broader range and more innovative forms of financing will be necessary. One innovative form of financing that is being promoted is payments for ecosystem services.36 The concept combines economic growth with environmental protection by assigning economic value to nature in order so that there are economic incentives for sustainable ecosystem management.37 However, while Vietnam has piloted implementation of a payment for ecosystem services scheme,38 developing such schemes is complicated and will also require fundamental changes in governance.39

Mobilizing both private and public funds continues to be needed. The UN Forum on Forests has developed a Global Forest Financing Facilitation Network to assist countries with greater need in accessing forest financing.40 Special assistance is given to certain categories of countries including Least Developed Countries, like Cambodia, Lao PDR and Myanmar.41 It is a new network, and no Southeast Asian country has yet accessed its support.

As for non-financial means of implementation priorities for the Asia-Pacific region, regional cooperation is necessary, especially for developing an integrated data system. UNESCAP has taken the initial step in providing an Asia-Pacific-level platform for data sharing, while the Asia-Pacific Forum for Sustainable Development, which meets annually, offers a platform for regional and sub-regional dialogue. However, additional work is needed to address the lack of information in both the Asia-Pacific Region42 as well as ASEAN.43 Mainstreaming biodiversity considerations into decision-making is essential to implementing SDG 15.

Globally, many of the indicators for SDG 15 are considered Tier I (not only is the methodology clear, but data are regularly produced for at least 50% of the countries and population in every region where the indicator is relevant).44 There remains a lack of data in the ASEAN sub-region for SDG 15, however.45 Additional work and cooperation is needed to gather the data to fill in the baseline for Tier II and III indicators. Improved collection and communication of information will require regional cooperation and assistance from UNESCAP.46 Major gaps remain in understanding the relationship between changes in population, production and consumption and ecosystems and natural resources in the ASEAN sub-region.47 It is expected that a fuller picture of SDG 15 will be available after the HLPF in July 2018.

Methodological issues meant that some data collected for the MDGs could not be compared and/or was incomplete. However, changes to data collection have been made for the SDG indicators, such as the FAO collecting forest data annually starting in 2018.48 A lot of usable data generally exists, contributing to the data baseline for seven of the 14 indicators for SDG 15.

Unlike SDG 6, there is no integrated data monitoring framework. FAO has developed a dashboard system for indicators it is custodian of (15.1.1, 15.2.1, and 15.4.2). UNEP has a data platform dedicated to its two indicators, 15.1.2 and 15.4.1. Summary statistics are available for 15.5.1 through the IUCN, and data for 15.6.1 is available through the CBD’s Access and Benefit Sharing Clearinghouse. Data is available, but neither easily accessible nor complete, for SDG 15.A.1 and 15.B.1.49

There are limitations to the data being collected. For instance, 15.1.2 does not address the effectiveness of the mechanism,50 nor does 15.6.1 address implementation of the policies or laws.51 While the data will be disaggregated, gender disaggregation will not be relevant for these indicators, even though proper implementation of the goal will have significant impact on women.