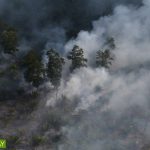 Sixty-nine million people were exposed to toxic haze as a result of last year’s devastating wildfires in Indonesia, a new study has found. Little is known about the health impacts of Indonesia’s annual fires, which spread uncontrollably because the country’s vast peat swamp zones have been widely drained and dried by the palm oil and pulp and paper industries. This renders the land highly flammable. Smoke from last year’s fires drifted as far as East Africa and the western Pacific Ocean. In September, researchers from Harvard and Columbia Universities released findings that 100,300 people in Indonesia, Malaysia and Singapore are likely to have died prematurely as a result of exposure to the air pollution produced by the fires. The new study, published in Scientific Reports, estimates that between 6,150 and 17,270 people died prematurely during September and October 2015, when the fires were at their peak. The previous study’s higher estimate is due to its also accounting for the deaths that occurred in the months after the fires, Paola Crippa, the latest study’s lead author, told Mongabay.