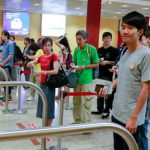 An inspection of Cambodia’s airports last week by a visiting delegation from the UN’s International Civil Aviation Organization turned up only minor issues, all of which are easily correctable, a senior aviation official said on October 31. Sinn Chanserey Vutha, spokesman for the State Secretariat of Civil Aviation, said preliminary results of the ICAO audit, which inspected international airport facilities in Phnom Penh and Siem Reap between October 20 and 28, were generally positive. “Following the audit, we received a ‘fair-good’ rating from ICAO” he said. “The full comprehensive report will be released after 60 days, and we hope that ICAO will give us enough time to correct the issues,” he said. Vutha declined to provide any details on the issues raised, but said the ICAO typically grants audited civil aviation bodies two years to correct the issues raised in an audit before taking further action. Cambodia fared poorly during its last full audit by the ICAO in 2007, with all criteria ranked substantially below international standards. Areas including navigation services and accident investigations were graded at almost 40 percent below international safety levels.