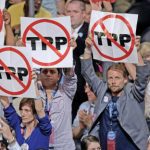 In the wake of Donald Trump’s surprise win in the US presidential election on November 9, Labour Ministry spokesman Heng Sour said on November 10 that the president-elect’s campaign promise to pull out of the Trans-Pacific Partnership trade deal would restore the Cambodian garment sector’s competitiveness in the region. The 12-member Trans-Pacific Partnership was signed in February and, once ratified, was expected to liberalise trade among signatory nations – including the US, Japan, Canada, Vietnam, Malaysia and Singapore. However, Trump, during his presidential campaign, adopted a protectionist stance on trade deals, vowing to renegotiate or break existing agreements. “The Trans-Pacific Partnership is another disaster done and pushed by special interests who want to rape our country – just a continuing rape of our country,” Trump said during a campaign stop in the state of Ohio in late June. Welcoming Trump’s victory in the elections, Sour on November 10 said that Trump would dismantle the TPP, neutralising any expected trade advantages for neighbouring Vietnam.