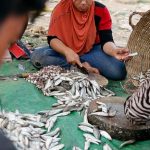 Just weeks ahead of the main fishing season on the Tonle Sap river, which supplies the majority of the fish used in the Kingdom’s traditional cooking sauce, prahok, government officials are predicting a better catch this season as water levels have recovered from last year’s drought. Eng Chea San, director-general of fisheries administration at the Ministry of Agriculture, said this year’s haul from capture fisheries should increase by 20,000 tonnes, while aquaculture yields could grow by up to 20 percent. “We expect that the fish yield will increase compared to last year, as water levels are higher and stable,” he said on November 23. Last year, Cambodian freshwater capture fisheries and aquaculture produced 751,000 tonnes of fish. The Tonle Sap river and lake contributed more than half of this total. Fisheries administration official Ouch Vutha agreed that higher water levels this year were a good portend for the upcoming season, especially after a prolonged drought led to a precipitous drop in last year’s production.