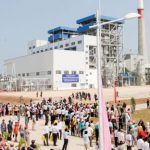 Cambodia’s domestic electricity production grew significantly in 2015, helping to reduce the Kingdom’s reliance on imported energy, the national electricity regulator said in its newly released annual report. According to the Electricity Authority of Cambodia, the Kingdom’s energy generation increased by 46.79 percent in 2015 compared to the previous year, with local energy production accounting for nearly 75 percent of the country’s total supply. Energy imports from Vietnam decreased by 5 percent, reducing its contribution to the Kingdom’s electricity supply to just under 20 percent, compared to 26 percent in 2014, the EAC report’s figures showed. Imports from Thailand fell by 41 percent last year, reducing its total energy contribution to 5.11 percent, compared to almost 11 percent in 2014. Demand for electricity continues to grow. The total number of electricity consumers in the country increased by 30 percent compared to the previous year, reaching 1.8 million in 2015, as efforts to expand access to the grid increased electricity coverage to 68 percent of the country’s villages last year, the report added.