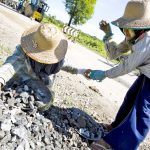 Despite being in the works since 2012, there is no end in sight for enactment of the Occupational Safety and Health Law, which has not yet reached the floor of the hluttaw for a vote. Since it was drafted, the law has been discussed among representatives from relevant ministries, labour organisations and businesses, but no final version of the law has been agreed. According to U Nyint Win, a deputy director from the Factories and General Labour Law Inspection Department, the current draft is being examined by the Attorney General’s Office. “We are awaiting comment from the Attorney General’s Office on the law. Once we have received it, the process will continue,” he said. An official from the Attorney General’s Office, who declined to be named, said that such feedback should not be expected any time soon. “It will take a long time to be sent back to the Ministry of Labour,” the official said. The new law will regulate workplace safety issues such as fire prevention, protective equipment, safe working practices and disaster-preparedness.