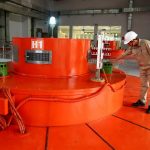 The electricity sector in 2017 would strive to prevent the power tariff issue from stirring controversies among people, said Hoàng Quốc Vượng, deputy minister of Industry and Trade. Vượng said the sector has not seen complaints about power tariffs this year, as the prices have been kept stable. The sector has ensured power supply to the production and consumption demand as well as national energy security in the year of 2016. A report from the Electricity of Việt Nam showed that in 2016, the group planned to have power output of 175.9 billion kWh. Of which, the EVN’s power productivity would be 81.6 billion kWh, while that of purchasing power output was 94.27 billion kWh and the commercial power output was 19.1 billion kWh. As of October, total power capacity was 40,823 MW, including 15,368 MW of hydropower plants; 13,826 MW from thermal power plants; 2,209 MW from small hydropower plants and 395MW from imported power.